Editorial: It’s time for civic-minded organizations to start proposing all kinds of debates. Maclean's would be happy to host the first one. 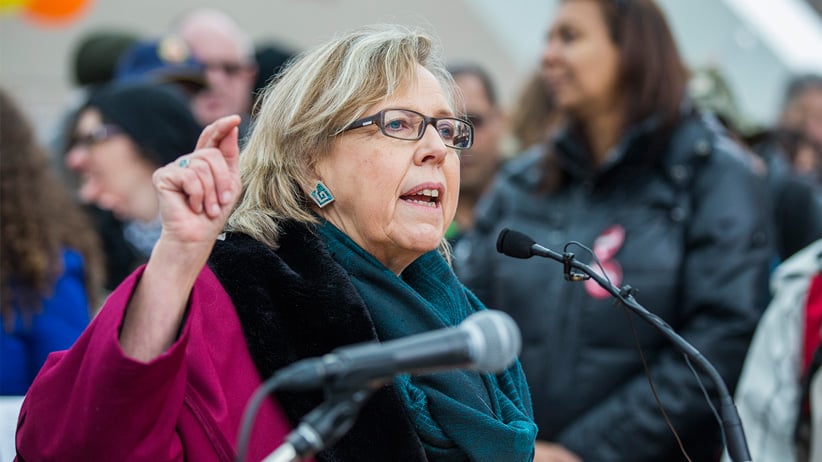 Listen to Paul Wells explain why we’re calling for more debates—and why we’d be happy to take charge on this—on our politics podcast, Maclean’s On the Hill. Subscribe to our weekly podcasts as well as Maclean’s Voices on iTunes or Stitcher for on-the-go listening:

Scarcity causes conflict. The October federal election is half a year away and already the feuding over televised leaders’ debates has begun. Should Green Party Leader Elizabeth May be invited? The Conservatives don’t want her there, claiming she is a Liberal in disguise. Liberal Leader Justin Trudeau, on the other hand, is eager to have May show up. There’s precedent both ways: The Greens had an incumbent MP in 2008, so May took part in the leaders’ debates. They didn’t in 2011, so she didn’t.

But what about the Bloc Québécois, whose leader isn’t an MP? What about Forces et Démocratie, whose two MPs are almost the only evidence of the group’s existence? It’s hard to believe we’re going to spend six months arguing about this.

But that’s just it. “We” don’t get to hash it out: the leaders of the big national parties do, in cahoots with executives from a consortium of television broadcasters. The consortium decides whom to invite. The consortium sets the venue and date of the debates. There are only ever two debates, one in English and one in French. They are moderated by broadcast journalists. They feature inscrutably different rules each time around—the leaders stand or sit, they speak in turn or talk over one another, they concentrate on memorizing the names of the “ordinary people” chosen by the networks to ask their questions from far away, via video. Or at least they did in 2011. Maybe it’ll be different this time. Depends how the broadcast consortium feels.

None of this makes sense. Everyone in Canada has a stake in a federal election, and while we know some of the people who work in television and they’re nice people, there’s no reason they should have a monopoly over the design of leaders’ debates, the subjects addressed or the leaders invited.

It feels kind of wicked even to suggest it, doesn’t it? And yet there’s precedent. In 1984 the National Action Committee on the Status of Women organized a debate on women’s issues in Toronto. Brian Mulroney, John Turner and Ed Broadbent all showed up, just as they had done for the two debates organized by the broadcast consortium. Four networks carried the NAC debate live. It didn’t hurt a bit. That extra chance to see the major party leaders in action, in what turned out to be a momentous election year, probably helped the voters choose. It would be a shame if it never happened again.

Party leaders always give two reasons to explain why there are only two debates: First, in a five-week campaign there’s no time for anything else; and second, “it’s in the hands of the consortium.” The second is a chant, not a reason. As for the first, well, everyone knows this campaign won’t be only five weeks long. With the fixed election date set for this Oct. 19, the campaign has been under way since autumn, and will start in earnest as soon as the House of Commons rises for the summer, probably in June.

If we’re stuck, as a nation, with a four-month campaign, we might as well benefit from it. It’s time for civic-minded organizations to start proposing all kinds of election debates. Some could be free-for-alls, with the leaders of all six (!) parties currently represented in the House. Some could be streamlined, with only the big three: Stephen Harper, Tom Mulcair and Justin Trudeau. Some could be one-on-one confrontations between, say, Harper and Trudeau, Trudeau and Mulcair. Debates don’t even have to focus narrowly on leaders: regional champions could duke it out in Halifax or Kelowna, or finance critics could discuss the economy.

Maclean’s is happy to get the ball rolling. We will be happy to host a debate, in English, anytime after June 15, with the leaders of the Conservative, Liberal, New Democratic and Green parties. We’ll carry a video feed on our website; any broadcaster who wants the signal is free to carry it live too. A Maclean’s journalist will moderate, and have a mandate to push back with follow-up questions to leaders who don’t give clear or detailed answers the first time they’re asked.

We won’t be surprised if not every leader accepts. The Conservatives and NDP have made no secret of their eagerness to draw Trudeau into as many debates as possible, in hopes of rattling him in front of a national audience. Harper seemed interested in debating Michael Ignatieff one-on-one in 2011, then wouldn’t let himself be pinned down on details. (We know. We tried.) But now the question is put, and voters will make their own judgments about leaders who talk a good game on democracy but are leery about getting into the arena.

Don’t like our proposed debate format? Come up with your own. There’s no reason to be shy. Universities, community colleges, libraries and community service organizations have as much right to organize debates as anyone else. Let’s put our leaders on the spot.