Canada has no coherent policy on China. Evan Solomon on why it's time for change. 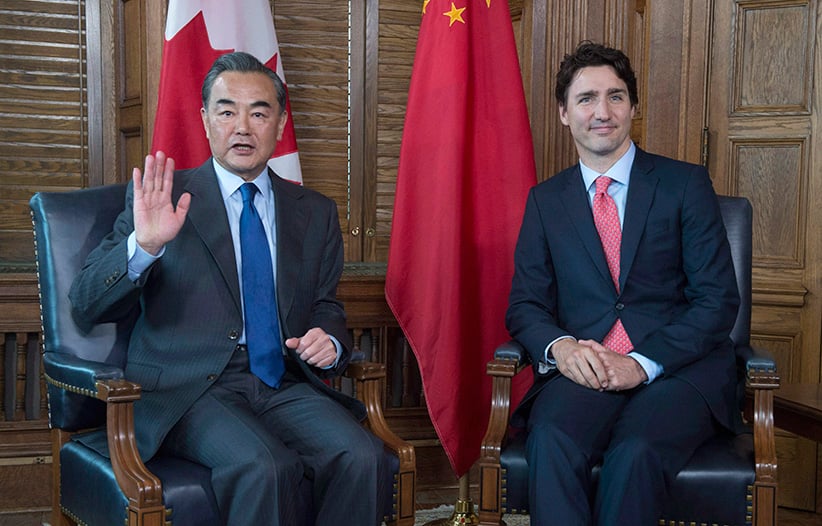 So much of politics is spin, but most politicians pretend they never do it. Not Justin Trudeau. During his two-day cabinet retreat in Sudbury, Ont., he visited the Science North centre, jumped into a gyroscope and started spinning wildly. It was poorly timed. At that very moment, Health Minister Jane Philpott was in the midst of trying to spin her way out of the $1,700-a-day limo rental controversy—it was a “sedan” not a “limo,” OK? Right. Philpott has apologized, offered to pay back the money, but this story is far from over. The opposition loves the smell of Liberal entitlement in the morning and they plan to bring it up when Parliament resumes in September. This won’t bring down the minister, but the burn marks left on the Liberal brand come as Trudeau prepares to head off to China and the G20 summit. And there is no way to spin that file: Canada has no coherent policy on China.

China is Canada’s second-largest trading partner, but two-way trade is only $85 billion. That’s the equivalent of about 35 days of trading with the U.S., a relationship worth close to $760 billion. Because both Donald Trump and Hillary Clinton are either openly hostile to or lukewarm on NAFTA, the U.S. situation quite rightly gets more attention than China. David McNaughton, the Canadian ambassador to the U.S., briefed the Trudeau cabinet in Sudbury, preparing them for a bout of protectionism.

The problem for Trudeau is that Canadians are ambivalent on China. According to a 2014 survey by the Asia Pacific Foundation of Canada, more Canadians view China as a threat than an opportunity. “The proportion of Canadians who consider China to be highly important to their economic prosperity dropped from 45 per cent in 2013 to 35 per cent in 2014,” the survey found, the lowest level the organization has ever seen.

The recent Canada-China relationship has been hot and cold. Chinese companies had invested more than $40 billion in Canada’s energy sector. Canada opened new trade offices there. In 2014, Stephen Harper’s government ratified the controversial Canada-China Foreign Investment Promotion and Protection Agreement (FIPA), hailing it as a key step to a more secure and favourable status for investors in both countries. But things suddenly turned. More restrictive rules on foreign ownership were introduced. Then came allegations of Chinese cyber-espionage, followed by worries about Chinese investment in Vancouver real estate. In December 2015, China’s massive sovereign wealth fund, the China Investment Corp, shut down its Toronto office, a signal it was separating from, if not divorcing, Canada’s resource sector. So what does Trudeau need to do?

It’s simplistic to imagine he can simply pick up his father’s 1970 policy of engagement and increase trade with China, though the Trudeau name does carry diplomatic weight. Real influence, however, has a price: security. China has raised regional tensions, exerting its presence in the South China Sea by building dual-use runways on artificial islands. The U.S. and its allies are all deeply engaged in this, but, as University of Toronto professor Wendy Dobson points out in an excellent article in Policy Options, Canada is missing in action. “Canada has been a silent spectator over the past decade as geopolitical tensions between China and the United States have intensified,” she writes. Dobson points out that Canada is not even part of important groups like the ASEAN Defence Ministers Meeting Plus, a group of nations working to co-operatively counterbalance China’s influence. Nor is Canada a member of new institutions like the annual East Asia Summit, which includes 18 countries—the U.S. and China among them—working on trade and security. “We are perceived as distant, aloof and reactive, focused narrowly on our own economic advantage,” Dobson argues.

Canada isn’t just missing meetings, it’s missing muscle. “We have allowed our naval presence in the Pacific to dwindle to something approaching irrelevance,” the former Canadian ambassador to China, David Mulroney says. “Navies carry the flag, do humanitarian work, conduct anti-piracy missions and build goodwill. Our lack of investment and presence speak much louder than our oft-repeated messages of goodwill.” Canada expects deeper influence, but has done little to warrant it.

If Trudeau really wants to change that, it means making a pivot toward Asia. That’s expensive. Not coincidentally, the Navy announced on Tuesday it was sending HMCS Vancouver to the Indo-Pacific region to “foster ties and partnerships,” but this barely makes a splash. Experts like Mulroney and Dobson argue that at the very minimum, Canada needs to create a comprehensive, detailed China strategy—including both economic and security issues. We don’t even have that. Canada is years away from a free trade deal with China, and unless Trudeau comes home with something concrete—business deals, new agreements, more formal engagement processes—these trips start looking more like jet-setting than agenda-setting. In other words, spin, not substance.