Why Conservatives and the NDP are fighting over the 'working class'

While the Liberals obsess about the middle class, the opposition will be talking about another kind of voter 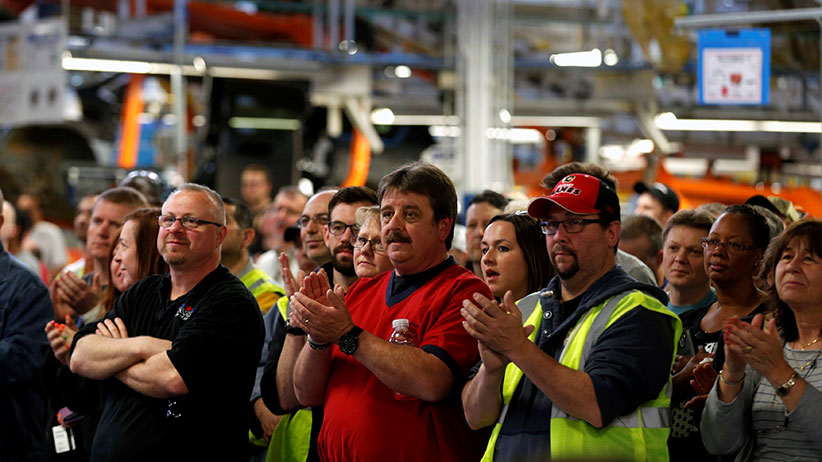 FCA assembly workers attend the celebration of the production launch of the all-new 2017 Chrysler Pacifica minivan at the FCA Windsor Assembly plant in Windsor, Ont., May 6, 2016. REUTERS/Rebecca Cook – S1BETCNEVUAA

Prime Minister Justin Trudeau and his party miss no chance to pledge their commitment to “the middle class and those working hard to join it.” Mentions of those in the centre of the income curve have soared lately—the phrase “middle class” was used in parliamentary debate 1,790 times in 2017, compared to just 391 references in 2014. But another segment of the citizenry may be in line for some attention in the run-up to the next election. Rhetorically at least, “working class” is on the rise.

The personal financial foibles of Liberal cabinet ministers and associates have given their opponents plenty to talk about in recent months, and the opposition parties have used the phrase to create maximum distance between team Trudeau and voters. In November, chief Liberal fundraiser Stephen Bronfman’s name showed up in the Paradise Papers, a compendium of leaked documents related to tax avoidance. The revelations showed the Prime Minister’s mates being advantaged “at the expense of working-class Canadians,” new NDP Leader Jagmeet Singh tweeted.

Contrast that with predecessor Tom Mulcair, who once asked why the party relied so much on “this boilerplate of ordinary working-class Canadians,” and whose fatal mistake in the last election was seen as being a turn to the centre. Even Jack Layton preferred to speak of “working families,” the term “class” perhaps invoking the socialist history the NDP supposedly needed to shed to win votes.

While Singh’s use of the phrase is a revival, its chief employer in the House is a more unlikely figure. Conservative finance critic Pierre Poilievre, who once recited the poetry of Rudyard Kipling in denouncing socialism, has spoken of the working class more than a dozen times since his party lost power in 2015.

He may be onto something. “There’s a decline in the whole middle-class bargain, the idea that you will do better than your parents, get a house [and] a secure retirement,” says Frank Graves, president of pollster EKOS Research Associates. That promise dominated the second half of the last century, but can no longer be counted on. “And people are noticing it.” The lines representing those who see themselves as middle and working class in Canada have been converging since the turn of the millennium, per EKOS’s research. A lot of people who could count on being members of the upper strata have fallen down a notch. That presents a political opportunity.

While middle-class voters are on board with the Liberals, the Conservatives are leading among voters who see themselves as working class in EKOS’s polling. That’s a big change from the Tories’ base under Stephen Harper, which Graves says skewed toward the self-identified middle and upper classes and had a positive view of their financial futures. “The Conservative constituency today is more gloomy economically.”

But the aspirational quality of the middle class remains strong, and there’s support to be had for any party presenting voters with a plausible path to membership. In 2018, expect to hear a lot more about the working class and those working hard to leave it.