One picture, less than 1,000 words: Dr. Oz's show was a perfect setting for Donald Trump to make his sales pitch to America 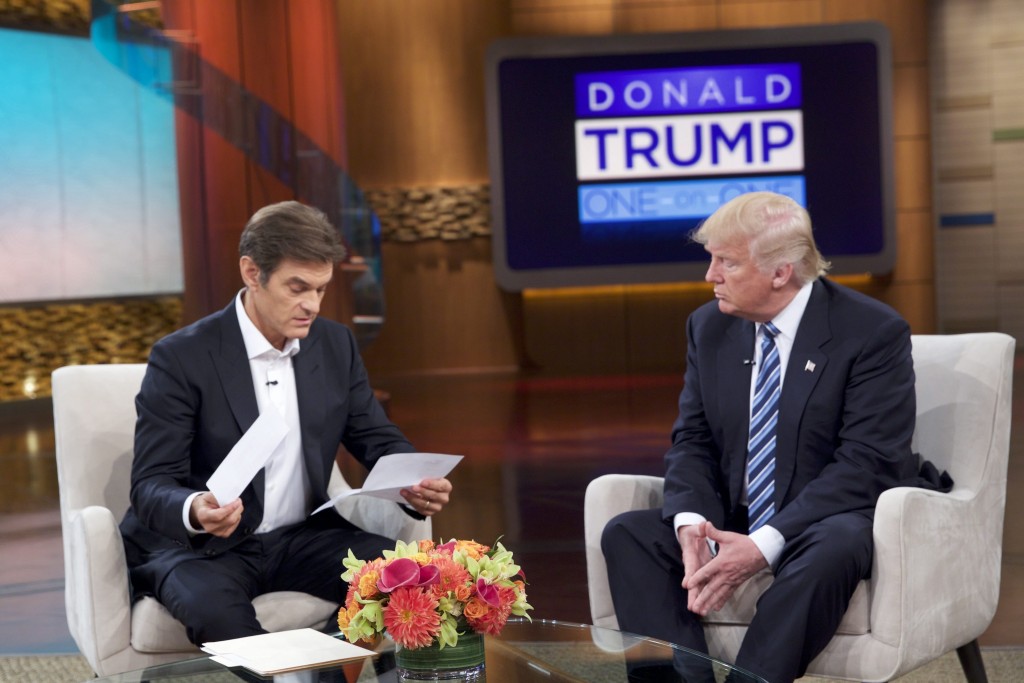 Dr. Mehmet Oz’s daytime program, which in recent weeks has featured segments like the “ultimate Alzheimer’s prevention guide,” the “biggest health improvements to your home for under $10,” “health confessions from restaurant workers,” and the “on-set exam room”—where Dr. Oz brought a guest to undergo a live examination “to discuss her gut symptoms and help her get a diagnosis”—is, according to Dr. Oz, not a medical show.

But it is a TV show. And Donald Trump was invited on it.

Hillary Clinton is 68 years old; Donald Trump is 70. That is, ostensibly, why so many people spent so much time wondering about their health this past week. Clinton’s collapse in New York City on Sunday during a 9/11 remembrance ceremony raised eyebrows amongst the mainstream press, and turned up the volume from fringe wingnuts who subscribe to wild-eyed theories that Clinton is suffering from something much worse than pneumonia, might be on death’s door, and could even be using a body double. Trump’s age is also partly why he finally agreed to reveal more about his own health records beyond a bizarre, hurriedly composed letter released earlier in the campaign that “unequivocally” stated Trump would be “the healthiest individual elected to the presidency.”

It has been pointed out a few times during this 2016 presidential campaign that it may be the last in which the two main candidates are Baby Boomers. Time magazine has called this election “the Baby Boomers’ last hurrah.” Over at the Huffington Post, it’s “the Baby Boomers’ last gasp to get it right.” At Politico, Todd S. Purdum wrote that Trump’s “call to ‘Make America great again’ is an appeal to a kind of Eisenhower-era normalcy and conformity, when the country was whiter, blander and safer.”

Maybe that’s part of the reason why 2016 feels so very different from 2008, the last U.S. election year in which there was no incumbent, and when the American economy was arguably in a more precarious position than it is now. Back then, everything seemed to be looking forward—even John McCain’s campaign slogan, “reform, prosperity, peace,” partially suggested things could be turned to a new direction. Now, it’s not just about looking back, but looking back one final time before the end. Where rebirth and new dawns brightened the path in 2008, death stalks in 2016. “There is no next election,” former New York City mayor Rudy Giuliani screamed at the Republican convention in July. “This is it.”

Back in 2014, Dr. Oz was hauled before a Senate committee after he was accused of hyping the benefits of weight-loss pills, including something called a “rapid belly melt” plan, that in reality did nothing. Weight-loss products are a huge market in the United States and worldwide, and they, along with other products Dr. Oz showcases, regularly see bumps in sales as a result. It even has a name. It’s called the “Dr. Oz Effect.” When it came to his “miracle” weight-loss advice, Dr. Oz admitted later to the Senate committee that “there is not a pill that’s going to help you long term lose weight without diet and exercise.” Coincidentally, when Trump presented his doctor’s report to Dr. Oz on TV Thursday, it revealed that the Republican is overweight.

There are a few obvious parallels between Dr. Oz and Donald Trump. They are both household names by virtue of their television shows, and they both recognize its enduring presence and effect on audiences (Trump, for example, is constantly obsessed with talking about his appearances in relation to TV ratings). They have both turned their surnames into brand names. And they both court plenty of controversy, by promoting and propagating theories and ideas long debunked by others in their stated professions.

It is entirely logical, therefore, that Trump would turn to Dr. Oz on television for validation; in a weird way, talking to Dr. Oz is as good as talking to himself.

The thing about Giuliani’s apocalyptic proclamation at the Republican convention was that, within the context of the conference, it was a very normal thing to say. Throughout his campaign, Trump has made death a prominent theme. He talks about death a lot. He talks about America’s death—at the hands of China’s economic prowess, or Mexicans coming over the border. Death via Islamic State terrorists or Syrian immigrants. And death of a nostalgic vision of America that never existed.

But that is not what Donald Trump is selling, ultimately. He is not selling death. He is not selling birth, or rebirth from that death. Instead, he is selling the same thing Dr. Oz sells: eternal youth. He is selling a miracle anti-aging formula. Magic beans. Snake oil. As Dr. Oz can attest, sales in that area are usually pretty good. Even if it is all completely bogus.