Why hard hats are everywhere on the campaign trail 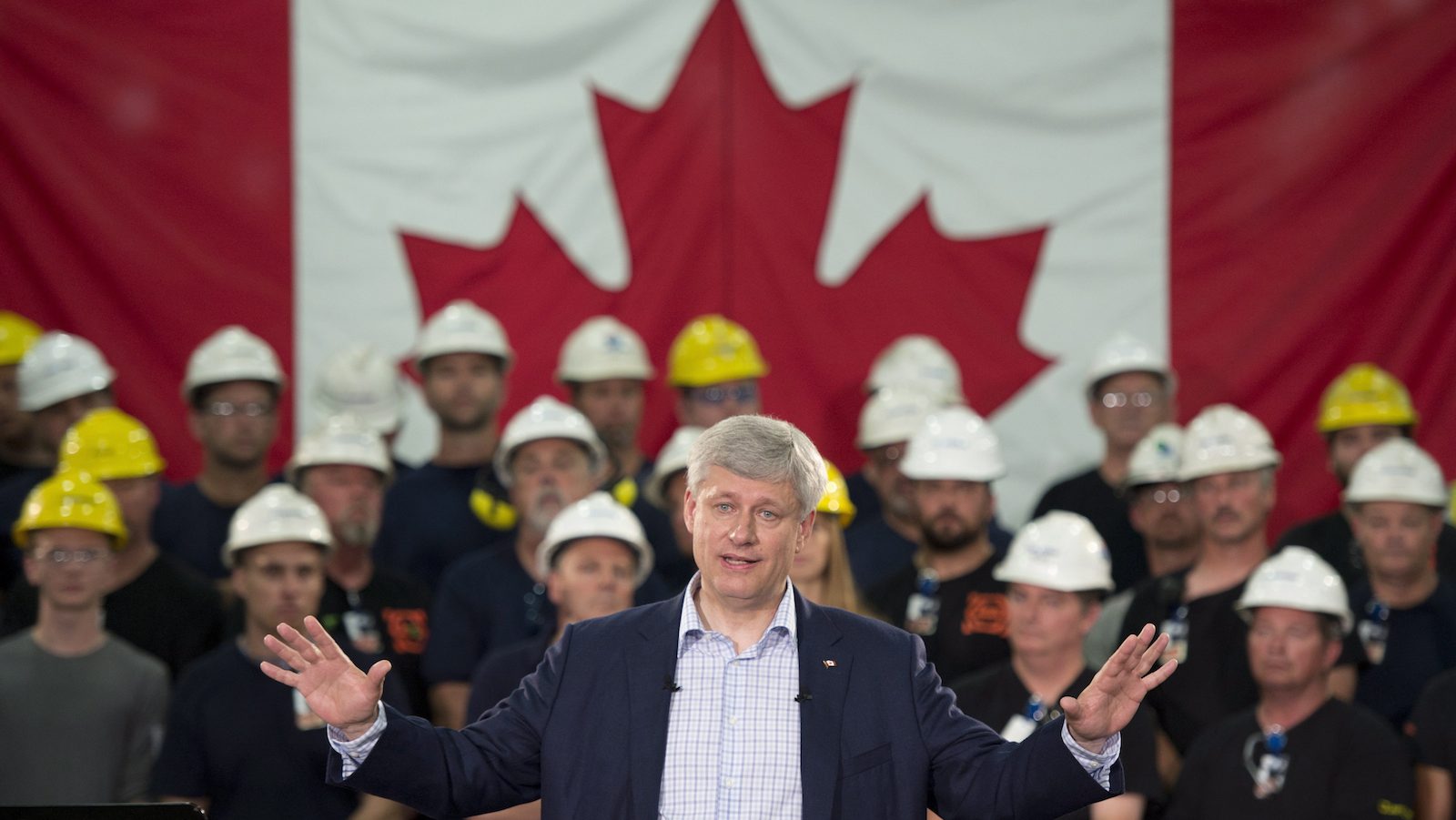 Conservative leader Stephen Harper speaks during a campaign stop at a steel manufacturer in Burlington, Ont., on Tuesday, September 1, 2015. THE CANADIAN PRESS/Adrian Wyld

There wasn’t much to the staff room where we reporters bided our time before Harper walked onto the shop floor of Laurel Steel in Burlington, Ont., and pledged help for struggling manufacturers. A few benches filled the space, and posters on each wall preached workplace safety. A couple of TV screens, the room’s only real animation, flashed industry updates in rapid-fire, too fast for the human eye. But the news was mostly bad: layoffs here, slow growth there. Minutes later, as Harper addressed party loyalists surrounded by Canadian flags, there came no mention of those hard times for manufacturers. No, the cluster of energized Conservatives celebrated the sector’s apparent “renaissance.” It’s all part of the Tory effort to court manufacturers, a key demographic in southern Ontario that Mulcair and Trudeau want to win over just as badly.

The PM’s promise of an advanced manufacturing hub for the region had local candidate Mike Wallace, a three-term MP and former Burlington city councillor, on his feet. Harper’s insistence that his government has made life easier for manufacturers, even as the sector has shed hundreds of thousands of jobs during his tenure as PM, brought repeated applause from those assembled. The presence just to Harper’s left of Jayson Myers, president and CEO of the influential Canadian Manufacturers & Exporters, only bolstered Harper’s position.

New Democrats probably stifled laughter at Harper’s claims. Mulcair and his team have spent years watching manufacturing job losses pile up and, when they’re looking for someone to blame, point the finger right at 24 Sussex. Harper lauded the 1.7 million workers who fuel the sector, which he said produces 11 per cent of Canadian wealth. He didn’t mention that, nine years ago, that number stood at 2.1 million. And Harper’s promises of a bright future came as Statistics Canada dropped its latest economic growth report. As economists widely predicted, the report didn’t show a whole lot of growth. StatsCan’s number-crunchers said Canada’s economy contracted at an annual pace of 0.5 per cent in the second quarter (less severe than some predictions). That means two straight quarters of contraction, the mark of what the government’s own balanced-budget legislation calls a recession.

Conservative spin doctors don’t like to talk about recessions, and they dutifully mined the latest data for any morsel of good news. They found that smidgen of positivity in StatsCan’s brief mention that real GDP by industry rose 0.5 per cent in June. Forget about two quarters of overall contraction. Harper had his ammunition. “We continue to see new data that indicate the Canadian economy is back on track,” he said, pointing to that modest growth and reminding the audience that the feds ran a $5-billion surplus for the first three months of 2015. When a reporter mentioned the two-quarter slump, Harper remained resolute. “The fact of the matter is over 80 per cent of the Canadian economy has been growing, and the Canadian economy as a whole is now growing,” he said. “That is the reality.” 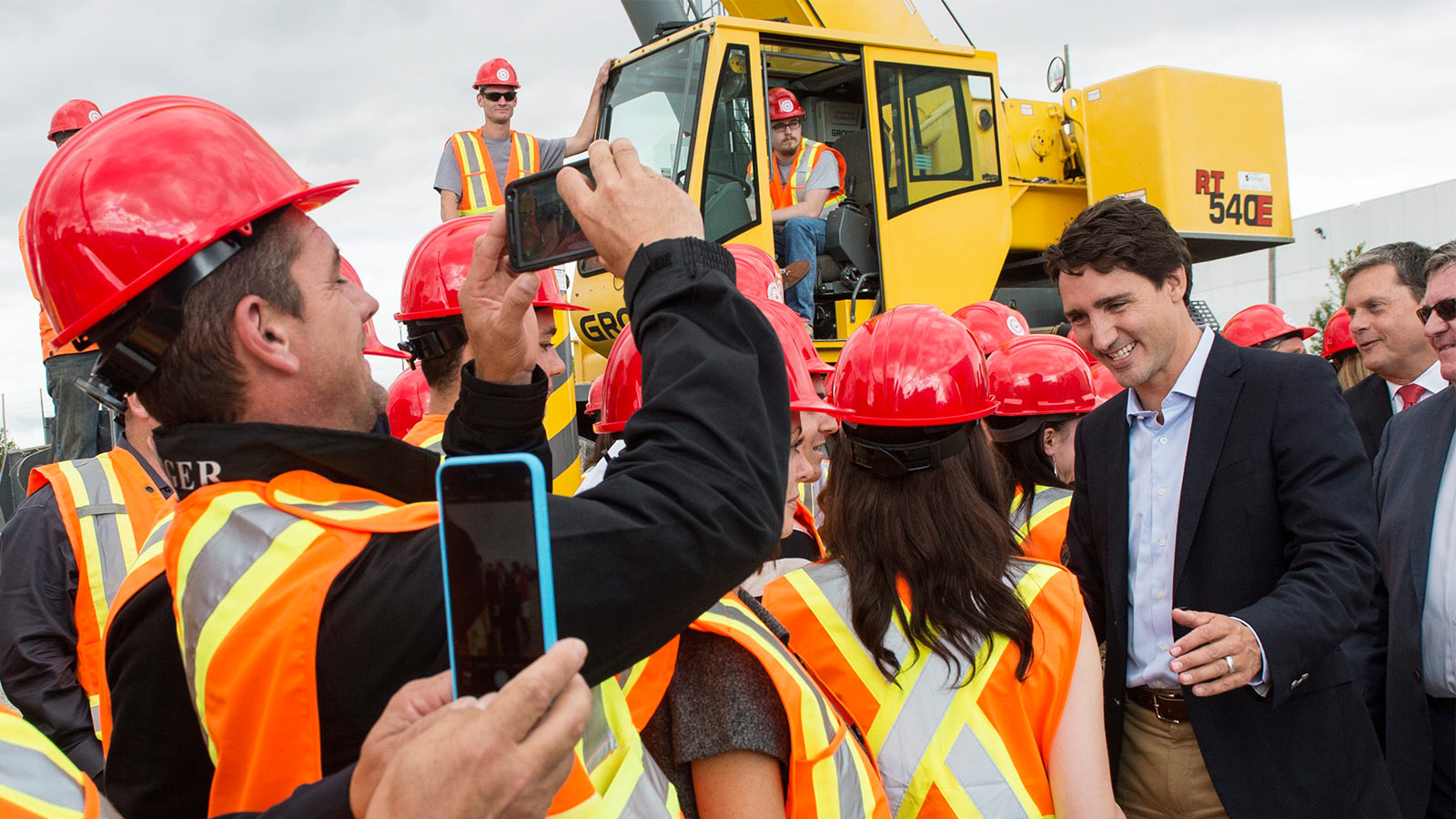 The party leaders are bending over backward to position themselves as friends of the people who make things and build Canada. On Aug. 27, when Trudeau announced a 10-year plan to spend $125 billion on infrastructure (and run three years of deficits), he found his way to the Oakville headquarters of the International Union of Operating Engineers, Local 793. The union’s website proudly proclaims its accomplishments: “We build the roads and bridges you travel on, the subways you ride in, and the offices you work in. We also build pipelines, stadiums, refineries, subdivisions, and work in landfills, mines and quarries.” As a mini-skyline of cranes and a cluster of hard-hatted workers stood behind Trudeau, he praised their hard work and reminded the crowd that he’d visited the same spot in his first days as party leader.

That visit came two days after Trudeau announced his economic team on the shop floor of InspecTech, a Scarborough-based company that manufactures testing equipment for pipelines and aerospace parts.

The NDP had to travel all the way to London on Aug. 26 to find a sympathetic manufacturer, but the party has a friend in Sciencetech. Irene Mathyssen has cultivated that relationship for several years. In 2012, when the federal budget introduced changes to the scientific research and experimental development program, Mathyssen complained to cabinet on the company’s behalf. She heaped accolades on Sciencetech, which she called a “leading, cutting-edge institution that fosters Canadian innovation and technical expertise.” Recently, Sciencetech added a Mathyssen sign to its patch of grass on Global Drive. (The company’s CEO, Alexander Quaglia, says much of the management group supports the NDP, but he welcomes every party to Sciencetech. Earlier this year, the minister of state for science and technology, Gary Goodyear, toured the facilities, along with local Tory MPs. Quaglia was happy to show them around.)

A day after Mulcair pledged his innovation tax credit, and dissed Harper’s apparent abandonment of local manufacturers, Harper was in Markham, Ont. The backdrop: Novo Plastics. There’s a trend here. Want to find a party leader? Google the closest manufacturing plant. It may be next on the itinerary.