Why Hillary Clinton is losing the war

Hillary Clinton's ground game might have worked in 2012. But Trump is playing by all-new rules. 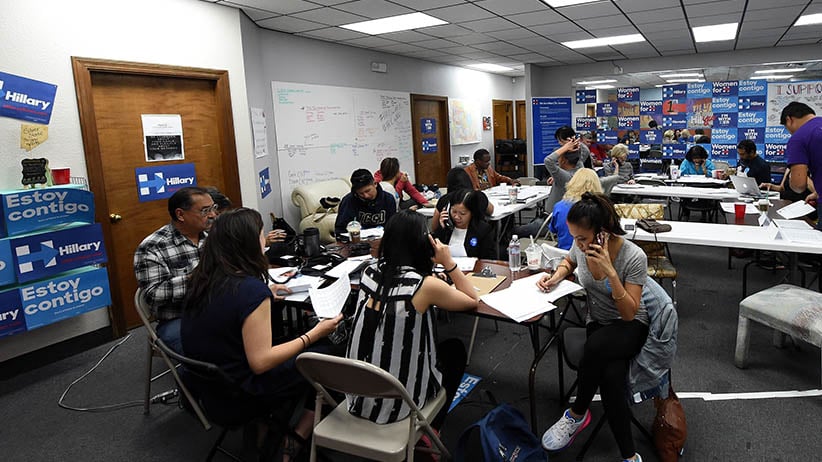 The 2016 U.S. presidential election continues to march to its own drum. Pundits and pollsters long expected a match up between Hillary Clinton and Jeb Bush. But the Republican primaries turned into a violent civil war, and Bush was one of the earliest casualties. The Democratic contest was also surprisingly ferocious, and while Bernie Sanders never came close to victory, he fought Clinton to the bloody end, leaving her wounded and the party divided.

Now Clinton and Trump are fighting for the presidency, and this race hasn’t unfolded as expected either. Most observers (including this one) predicted the Trump strategy of bluster and BS would inevitably backfire. They anticipated that either the cumulative weight of the daily outrages would eventually drag him down, or that he would discover some new and horrifying way to unequivocally disqualify himself from the White House. But it is now only seven weeks until Election Day, and the polls show Trump with the momentum, gaining in key battleground states, and closing in on Clinton.

Nonetheless, many are suggesting the polls are not accounting for Trump’s Achilles heel: his ground game.

The “ground game” is how political parties mobilize those voters who would vote for them, but may not actually get themselves to a polling station. The true believers, the party faithful, can be relied upon to cast a vote come hell or high water. But their numbers alone are rarely enough to win an election. Victory depends on people who the pollsters categorize as either “undecided” or “leaning.” Identifying these people through demographic analysis, polling data, phone calls and door-knocking is the first phase of a good ground game.

Finding these voters is particularly important in this election. Both candidates have serious and obvious flaws. As a result, polls show 18 to 20 per cent of the electorate is still on the fence. At the same point in the last presidential election, this number was five to 10 per cent.

Once the campaign team has ID’d the people who may vote for them if they get to the polling station, then the second phase is to mobilize them. This could mean calling them to explain how to vote early, targeting advertisements to motivate turnout, or even physically driving them to cast their ballot on Election Day.

The resources needed for the ground game are massive. In the United States this means field offices scattered in counties all across battleground states. The Clinton team has opened more than 30 offices in Wisconsin alone. Manpower is also critical, especially paid full-time staff who are willing to relocate to a rural county in Ohio for months on end. And there are other investments in advertising, IT and data.

Clinton supporters are taking solace in the fact that Trump has all but ignored this aspect of a traditional presidential race. In the battleground states, Clinton has three times as many campaign offices. In almost every state where there is a field presence, Clinton’s is larger. And in those states where Trump does have offices, most of them are not run by his campaign, but by the Republican Party—and these are focused on supporting the “down ballot” races. 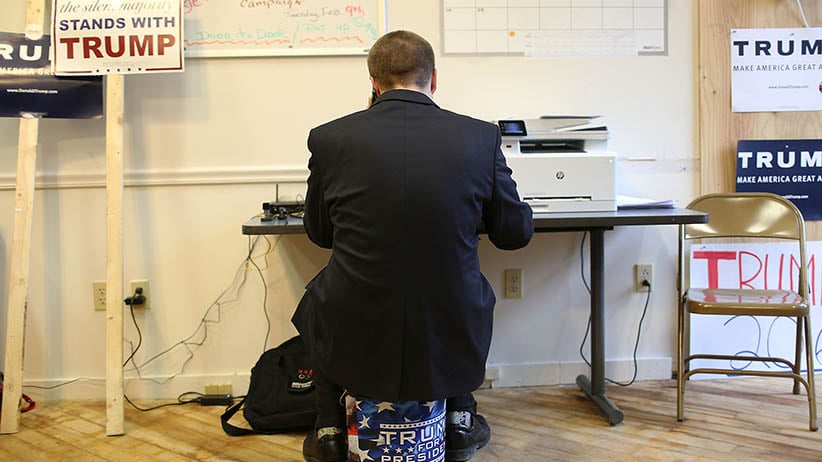 I drove through one of these battleground states last week, New Hampshire. Earlier in the campaign it was used as an example of how Clinton’s organization was outclassing Trump. The Democrats have 17 field offices there, while Trump has just one. It is situated on the second floor of a small office complex and is approximately a quarter the size of Clinton’s office across town. While I was there there were only a handful of staff working a phone bank. In contrast to the cheerful college students who greeted me at the Democrats’ field office, the average age here was closer to 60. To a casual observer, this was not the beating heart of a thriving get-out-the-vote operation. And yet Trump is making relentless progress in the state, which is now considered a toss up.

Trump is also far behind in advertising. To date, Clinton has been outspending Trump on paid TV and radio ads by a ratio of approximately five to one. According to AdAge, which tracks campaign media buys, this gap will only widen between now and Election Day. Of the $150 million in booked TV and radio spending through to Nov. 4, Clinton and pro-Clinton PACs account for $145 million of it.

To some observers, and many Clinton supporters, the lack of a field organization could mean Trump will perform far below expectations on Nov. 8. The theory is that even if the Republicans are leading in polls, the Clinton campaign will still win because they have ID’d more individual voters and will be able to get a larger proportion of them to the ballot box.

Those who believe this also point to the fact Trump has intentionally focused on reaching out primarily to working-class white men. According to a recent Washington Post poll, only 62 per cent of people in this demographic are “absolutely certain” they will vote in November. By contrast, Clinton has the overwhelming support of white, college-educated women, of whom 90 per cent expect to cast a ballot. In other words, Trump needs to mobilize his voters more than Clinton does, but he has fewer resources to do it.

However, there are a few problems with this narrative. During the primaries, Trump crushed the other Republican contenders again and again. And he did it with almost no ground game and a comparatively tiny organization overall. Ted Cruz, Marco Rubio, and Jeb Bush all raised two to three times more money than Trump, and they used those funds to blanket key states in staff and advertising to motivate supporters to get out and cast a ballot. None of it mattered in the end. Even without a ground game, Trump still won handily.

Why? Because Trump is fighting the campaign in the air, not on the ground. Even before he formally entered the Republican contest, the self-proclaimed billionaire was dominating campaign coverage. His well-honed skills as a performer made him irresistible to TV producers who knew a five-minute interview on the morning show would provide enough sound bites to fill the rest of the day.

Those voters who were undecided or leaning toward Trump didn’t need to be contacted by campaign volunteers or driven to the polls, they were sufficiently motivated by the countless times the candidate himself had “touched” them through what is called “earned media”: mentions in the press as opposed to paid advertising. A dozen Rubio TV ads are not as influential as one heated discussion of Trump on The View.

Trump is now using the same strategy in the presidential campaign. Instead of door-knocking, his field staff are organizing large telegenic rallies that will be covered on all the local news. His habit of then using those venues to spark outrage or controversy almost guarantees that the events will also be covered nationally.

Clinton, by contrast, has not even tried to compete. While Trump was on TV every night, haranguing thousands of supporters with controversial invective, she was quietly fund-raising at private homes and small events, far from the cameras and even further from the evening news.

According to a study just released by the website The Data Face, throughout the campaign Trump has earned more media mentions than Clinton both online and in print. In the last six months, there have been two to three times as many headlines with his name, than with hers.

Some have argued that this is a misleading statistic, because much of the Trump coverage is highly critical, and should therefore hurt, not help, his cause. But the same team analyzed media sentiment. While there were significant differences between liberal and conservative media outlets, in the aggregate both candidates were being criticized in equal proportions.

There is a saying that generals are always fighting the last war, meaning they recall what worked in the last war, and apply it to the next enemy. This is what Clinton is doing. She’s fighting the 2012 campaign when door-knocking, ad buys and data mattered against a traditional candidate like Mitt Romney.

The results are self-evident. It’s now late September, and the odds of Trump becoming the next president of the United States are getting better every day. Momentum is clearly on his side, and there are no signs that Clinton will, or even can, change her ground game strategy. Trump will continue to focus on the air war, and it may win him the White House.