Why isn't Lisa Raitt the next Tory leader?

She has blue-collar roots, experience as a Toronto-based executive, and an accomplished career in Ottawa. But it wasn't enough. 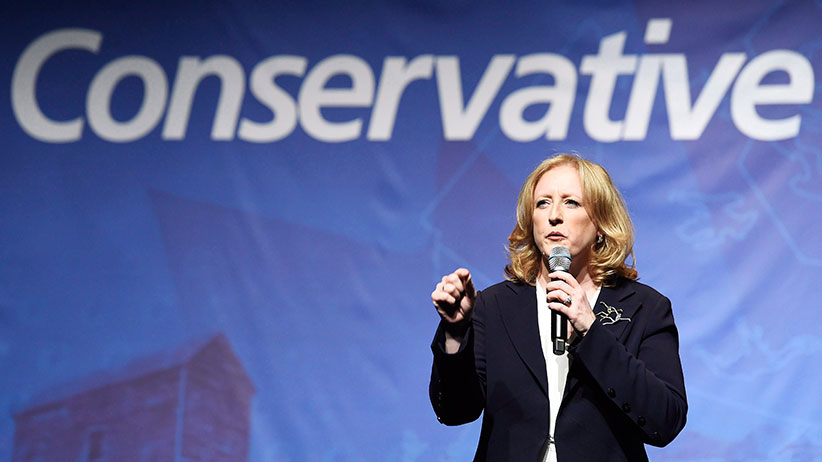 In the foyer outside the Conservative Party’s convention hall Friday, Lisa Raitt looked relaxed, at ease, even confident. An hour earlier, Raitt had delivered a speech in that hall that urged her party to unite around whomever came out on top after the several rounds of ballot counting to follow on Saturday night. The speech was popular; the #CPCldr hashtag crowd was uniformly impressed by the turn onstage of the MP from Milton, Ont. Indeed, after the final leaders’ showcase at the Toronto Congress Centre on May 26, Raitt found no shortage of fans as she milled about the buzzing foyer. Even a gaggle of rival Erin O’Toole supporters lined up to congratulate her on her speech.

But Raitt isn’t the next Conservative leader. By applause during the showcase, she wasn’t even in the top tier of candidates. And on paper, that’s a mystifying conclusion for what might have been a promising campaign. Raitt has working class, east-coast roots (she even walked onstage to The Barra MacNeils’ Celtic-infused The Island on Friday night). Later in life, she entered Toronto’s corporate world, and ended up running the Toronto Port Authority. In 2008, wooed to elected politics by Stephen Harper, Raitt won a seat in the House of Commons and swiftly entered cabinet. Her first years as natural resources minister, however, had their low points; she accidentally left sensitive documents at a TV studio, and was also caught on tape speaking critically of some Tory peers.

READ MORE: Lisa Raitt is back from the brink

Shuffled to the labour portfolio and eventually to Transport, Raitt rehabilitated her image and emerged from the Harper era as a capable minister who managed to fend off a strong Liberal challenge in the riding of Milton in 2015. She’s improved her French. And she’s not a hardliner by any means.

Party members, though, never responded to her ideas, and her campaign never took off. Mark Cameron, a former director of policy and research in Stephen Harper’s prime minister’s office and now the executive director of Canadians for Clean Prosperity, knew Raitt as a cabinet minister in Ottawa. “I thought that she would have been more of a frontrunner going into this campaign than she has been,” he said, identifying two weaknesses in Raitt’s campaign: a lack of bold, signature policy and a lack of command of the French language.

Raitt brought policy to the table. She championed a national dementia strategy—an acutely personal issue on the home front, particularly since her husband, Bruce Wood, was diagnosed with early onset Alzheimer’s last year. But she had no natural base in social conservative circles, and some of her policy probably didn’t fly with conservatives more broadly: for example, a pledge to decentralize government by moving big federal departments into the regions. “Most Conservatives by inclination are people who want government to be smaller,” said Cameron. “So having Agriculture Canada employees in Saskatoon or Fisheries employees in Charlottetown doesn’t necessarily get Conservatives that excited.”

Without the sort of buzz necessary to push her campaign into contender territory, when Raitt had members’ ears for a final time before the last day of voting, she delivered the closest thing to a concession speech all night. “I’m asking you for unity,” she said, to the largest applause she’d hear that evening. “When we focus on providing an effective alternative, we govern.” That sort of cohesion after such a divisive race isn’t easy, she admitted. “The cost of this diversity is not everybody gets everything they want.” But as Tories confront the sometimes starkly different values among their ranks, Raitt challenged them with a rhetorical question: “What is more important? The last campaign, or the next one?”

Raitt’s final pitch was not cooked up at the last minute, and in fact was planned about two weeks before the convention (and soft-launched at the Huffington Post a couple of days earlier). “I’m really on next steps, which is two years to a real campaign against Justin Trudeau, who is a formidable opponent,” Raitt said after her speech. “The country’s different than it was 10 years ago, and running like you’re Stephen Harper isn’t going to work.”

Her time as an influential Conservative is nowhere near winding down. She offered big hints about her priorities for her party as it gears up for the next federal election. In her convention speech and afterwards, Raitt made repeated mention of the women she’d met on the campaign trail, including single moms and senior widows. “Fifty-two per cent of the country is women, and someone’s gotta be talking about policies that make sense to the average Canadian woman. I’m the average Canadian woman. And I’m a Conservative. And there’s a lot of us.”