Why John Horgan got scrappy in the B.C. election debate 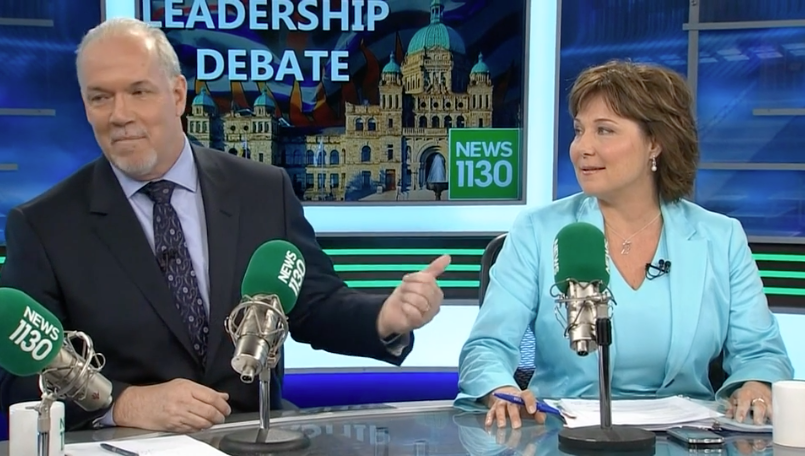 You only get one chance at a first impression, the old saying goes, and the B.C. NDP’s John Horgan—a leader almost half the province could not name in a poll 10 days ago—came out with his fists flying at Thursday’s leaders’ debate. It’s the first of the B.C. election, and for many British Columbians will serve as their introduction to Horgan. The tone set by the tough talking, 57-year-old MLA, raised working class on Vancouver Island by his widowed mom, mirrors the NDP campaign, so far. It marks a return to old-school, bare-knuckled B.C. politics, after the previous NDP leader chose to fight a “positive campaign” in 2013—with disastrous results. For a stretch toward the end of the radio debate, broadcast live this morning on Vancouver’s NEWS1130, Horgan and Premier Christy Clark, who sit barely 10 feet apart in the legislature in Victoria, could not bear to look at one another. Though Clark managed to keep her cool throughout, grinning like a Cheshire cat as she and Horgan traded barbs, the animosity was palpable. It’s not even Day 10.

Debates are high-risk, high-reward events—for Horgan, especially: this election is Clark’s to lose. And fights like these can be decided on tone, and body language. Going in, Clark, a one-time Vancouver radio host whose megawatt smile can somehow conveys intimacy, emotion, intensity all at once, clearly held the upper hand. Her weakness may be a propensity to put her foot in her mouth and a reluctance to own up to mistakes (case in point: her recent, baseless accusation that the NDP hacked the Liberal website, for which she was eventually forced to apologize, which she did over voicemail). But when it comes to retail politics, she’s among the country’s best.

So make no mistake: Horgan’s aggression, and the merciless, rat-a-tat punches that took aim, again and again, at the Clark record, were no accident; they were meant to reflect the NDP’s take-no-prisoners approach to the campaign.

In the last battle, the premier treated Adrian Dix, the party’s previous leader, like a cat with a toy mouse, batting him around throughout the campaign (at times, it was almost uncomfortable to watch). In Horgan, however, the NDP know they’ve got a pugilist, whose rage over the political power of money he feels has infected the province comes from deep within, and is as real as it is raw. The NDP is clearly trying to channel that fury, to show voters, particularly those struggling to make ends meet in the Lower Mainland—a region with the country’s most expensive housing, in a province with some of Canada’s lowest salaries—that Horgan is on their side, that he’s willing to overturn a system he feels benefit Liberal donors at the expense of regular British Columbians. Clark showed Dix no mercy four years ago. Horgan seems to be out to return the favour. But will it work?

RELATED: Does John Horgan have the stuff to beat Christy Clark?

In debates, Clark doesn’t need to play offence. Indeed, as the odds-on favourite on May 9, she needs to avoid taking risks. This means holding back a little, and not giving Horgan the opportunity to get lucky and trip her up. Debates, as she knows, are more often lost than won (Green Party leader Andrew Weaver might have “lost” in this debate, for instance, merely because the Horgan-Clark fireworks monopolized centre stage).

In the legislature, as a rookie leader, there were times Horgan allowed Clark to bait him. She was taunting the Opposition leader again on Thursday, attempting to get him to take a few reckless swings. She’d throw out a blatant falsehood about the NDP platform—“alternate facts,” Horgan sputtered at one point—then sit back as the NDP leader shouted over her. When Horgan complained the host, veteran local broadcaster Bill Good he was allowing Clark more time, she turned to him: “Calm down John,” she said, not without condescension, patting the NDP leader on the arm. “Don’t touch me again, please,” he replied.

Yet Horgan’s weakness may also be his strength. Where some see anger, others see passion. Voters rarely see a full debate. They watch it in clips on their Facebook feeds and the nightly news. The point of it all is to make yourself look strong and nimble.

And there were times Clark’s attacks fell flat. In her defence, the party has given her little to work with. The stale and hackneyed Liberal platform, an exhaustive celebration of the government record, contains almost no new promises; this has forced her to try to fight back using the tired, Liberal strategy of drumming up fear over the NDP’s mid-‘90’s record. “It’s April, 2017,” Horgan said at one point, shutting down the attack. “What are you going to do for people today?”