Politician visits to the site of a tragedy require a sensitive touch, showing leadership and compassion without making themselves the centre of attention 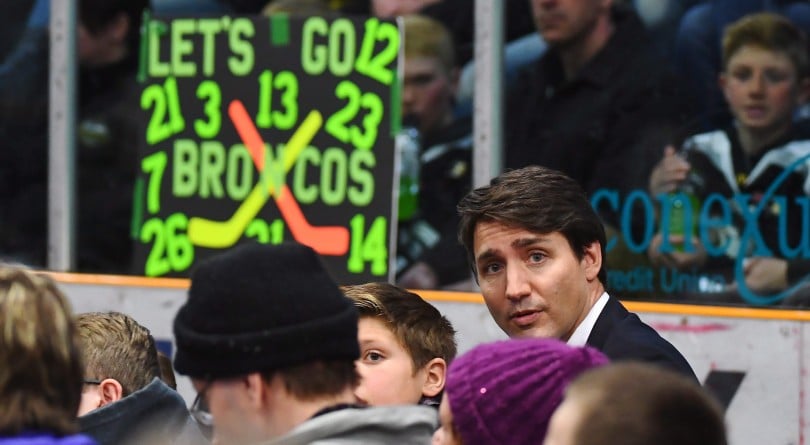 Prime Minister Justin Trudeau attends a vigil at the Elgar Petersen Arena, home of the Humboldt Broncos, to honour the victims of a fatal bus accident in Humboldt, Sask. on Sunday, April 8, 2018. (THE CANADIAN PRESS/Jonathan Hayward)

Prime Minister Justin Trudeau was among an overflow crowd of hundreds who packed the hockey arena in Humboldt, Sask., to remember and to mourn on Sunday evening. But you almost wouldn’t have known he was there—likely by design.

While religious leaders, the town’s mayor and the president of the Broncos Junior A hockey team took turns at the podium to address a grieving community and attempt to process the unimaginable after a bus crash that killed 15, Trudeau remained publicly silent. He sat in an unobtrusive spot in the crowd rather than at the front with local dignitaries, as did Saskatchewan Premier Scott Moe.

Politician visits to the site of a disaster or tragedy require a sensitive touch. Leaders must show up at the right moment to demonstrate their solidarity and support to communities that are reeling, but without making themselves the centre of attention in a moment that is very much not about them. In many ways, how they should conduct themselves is exactly what you’d do if a friend experienced a death in the family: be gentle, be helpful, be unobtrusive—and most of all, just be there.

Under normal circumstances, we don’t think of our relationship to our political leaders in paternalistic terms, says Peter Donolo, who was director of communications to Jean Chretien when he was prime minister. That’s as it should be in a democracy, Donolo adds, but it changes in the wake of a mass tragedy or natural disaster. “There’s times like that, where people really do put politics aside, and they look to their national leader—regardless of what party they’re with—as a parent figure,” he says. “In cases like that, they look to the leaders of the country to kind of grieve with them, to share their grief with them, to be with them.”

Previously, Trudeau highlighted the importance of smart and sensitive timing when visiting a disaster zone. In May of 2016, when wildfires ravaged Fort McMurray, the prime minister stayed away for two weeks before travelling to Alberta to fly over destroyed neighbourhoods and meet with emergency workers. “I think we’re all aware that a prime minister showing up in Fort McMurray when firefighters are busy trying to contain a massive, raging wildfire is not a particularly helpful thing,” he had explained, when questioned about when he would visit.

There’s a distinction between a politician like Trudeau arriving to show leadership in the context of a government response to a disaster like that, or offering a display of public compassion following a personal tragedy like this one, says Alex Marland, a professor of political science who studies political communication at Memorial University. And a prime minister must deftly handle both of those roles, he says.

“In my opinion it is important for a grieving community to see that their political leaders are grieving too,” he says. “Personally, I always like hearing when a grieving relative or a community leader remarks publicly that they received a private phone call from the prime minister.”

On the day of the vigil, Trudeau fulfilled that role too, visiting injured players in the hospital.

A Twitter user who identified himself as the father of Broncos player Ryan Straschnitzki posted a photo of Trudeau standing at his son’s bedside. “We may not agree on Politics. But we sure do agree on Support,” the father wrote. “Sure am proud our Prime Minister and his son showing up and chatting hockey. Thank you very much.” In other updates, he reported that his son had undergone a seven-hour surgery after breaking his back in the crash, and that he was paralyzed from the chest down.

A prime minister’s schedule is normally planned months in advance, but when an emergency happens, all of that is dropped to provide an immediate reaction crafted with a delicate touch, says Marland. “Political and public expectations are that the prime minister will have a timely, sensitive and efficient response,” he says. Staff in the Prime Minister’s Office and other high-level government departments will pull all-nighters to ensure the proper messages go out to offer official condolences and convey practical information about ongoing emergencies.

Marland also ventures a guess that after horrible tragedies, messages such as the tweet Trudeau posted on Friday evening—”To the entire Humboldt Broncos hockey community: We are here for you. As neighbours, as friends, and as Canadians, we grieve alongside you.”—are more likely to be crafted by a politician personally, rather than the usual committee of staffers who handle such things.

But however well-intentioned the visit or careful the timing, there are times it would probably be better for a politician to simply steer clear of a community in crisis.

In 1997, Chretien was heavily criticized for his response to a devastating flood of the Red River. He called a snap election while waters were still rising on the “flood of the century,” and some Manitoba candidates closed their campaign offices and re-deployed their volunteers to help with relief efforts. When the prime minister arrived at a Winnipeg dike, presumably seeking to combat perceptions of his disengagement, cameras instead caught him awkwardly hoisting a single sand bag and asking “What do you want me to do with this?”

In that case, Donolo notes ruefully, the problem was going ahead with the election when they did, so that anything Chretien did after the fact would have looked “token-ish.”

But ultimately, showing up and showing solidarity when your people are suffering is the most important aspect of a job no political leader really wants to have to do. “You don’t want to have these opportunities to show that, but you rise to the occasion,” Donolo says.