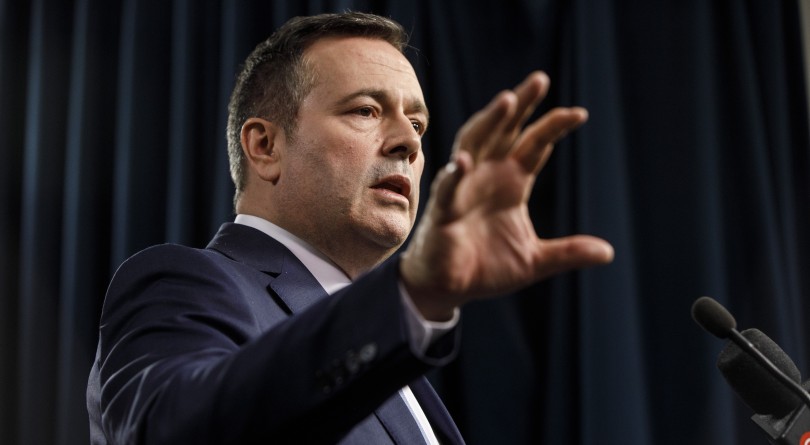 Week 1: The UCP lost a candidate in the campaign’s first week over remarks sympathetic to white supremacy.

Week 2: The UCP lost a candidate over remarks seen as Islamophobic, homophobic and transphobic.

It seemed inevitable that the NDP or somebody would air some other candidates’ intolerance-stained laundry as the campaign’s Week 3 began. It happened Tuesday on cue, and this case is  more serious for Jason Kenney’s party than the previous ones. Incumbent MLA and education critic Mark Smith, in a guest sermon at his local Baptist church in 2013, began a discussion of “what is love?” by disparagingly listing abortion, Robert Latimer’s 1993 murder of his disabled daughter, homosexuality and pedophilia as things sometimes described as things some people associate with love. As first released by Gaywire on Edmonton campus radio station CJSR:

“You don’t have to watch any TV for any length of time today where you don’t see on the TV programs them trying to tell you that homosexuality and homosexual love is good love.Heck there are even people out there, I could take you to places on the website, I’m sure, where you could find out that there’s … where pedophilia is love.”

Rather than step down, Smith gave a sort of apology released by the party for poorly framing his remarks of “many years ago” (actually, five-and-a-half). Though Kenney had stated he’d do stringent vetting of his candidates’ for signs of past or present intolerance, the third jarring case of bigotry from among his candidates will add to the sense of a prevailing problem within the socially conservative former immigration minister’s party. (Also Tuesday, the NDP revealed another UCP candidate wrote in a 2003 church newsletter about the “homosexual agenda,” prompting a similarly worded statement of regret).

Later on Tuesday, the Edmonton Journal reported that Smith brought his prejudice into the legislature, writing a 2015 memo to his Wildrose Party caucus colleagues that arguing Christian schools should be able to fire homomosexual teachers. Kenney’s critics can now easily draw a straight line between his education critic’s comments and the UCP plan to loosen rules for gay-straight alliances in schools, as well as between some candidates’ mistrust of climate science and the party’s intention to weaken current environmental policy.

The NDP demands that Kenney fire Smith. He has refused to do so, in an echo of how Wildrose leader Danielle Smith stood by a 2012 election candidate who delivered a church commentary saying gays would burn in a “lake of fire” (though he never apologized) and the party subsequently blew its election lead. There are harder political consequences at this stage of a campaign for jettisoning a candidate as a “distraction”—as of last Friday, nominations are closed, which means UCP either runs Smith in the Edmonton-area riding of Drayton Valley–Devon, or they run nobody and give up a safe seat. The party seems resigned to wearing this latest display of prejudice, hoping the last boilerplate line of Smith’s statement rings true to Albertans: “Albertans are tired of revisiting old, divisive debates from many years prior. Our focus in on reigniting our economy in order to get Alberta back to work.”

Vancouver-based Research Co. issued a poll Tuesday stating the UCP’s provincial lead sits at a mere five percentage points, echoing a questionable poll done for Unifor that came out on the weekend. Veteran Calgary pollster Janet Brown Opinion Research issued a survey Wedensday commissioned by the Global Petroleum Show that more resembles the polls from before the campaign began: a 19-point lead for Kenney’s party. It’s hard for me to conclude which polls are closest to reality. But let me share some of what I hear from campaigners on both sides:

—NDP is showing surprising fight in some Calgary seats outside at the inner city’s edges, and in communities around Edmonton.

—The economy and unemployment remain the dominant issues

—Kenney’s unpopularity shows up at the doorsteps; candidates don’t discuss him unless prompted

While the frontrunning United Conservatives plan to scrap the provincial carbon tax and sue Ottawa to block a federal equivalent, one of Canada’s biggest gas station companies made threats in favour of an economy-wide carbon tax. Royal Dutch Shell, which also owns various natural gas and oil refinery projects—though it recently diminished its oil sands stake—has warned it may leave Canada’s chief oil lobby group, the Canadian Association of Petroleum Producers, over its lack of support for a carbon tax or the Paris climate agreement, CBC reports.

Last month in Houston, energy majors Suncor and Husky extolled the virtues of existing carbon emissions plans. To be sure, many large, mid-size and smaller oil firms prefer more lenient environment regulations that help them keep costs down. But in a non-monolithic energy sector, Kenney will face pushback if he allows Alberta’s industry to do less in the fight against a warming planet.

Meghan Grant on a potential penalty for “kamikaze” campaign’s CFO: “In 2017, [Lenore] Eaton was simultaneously the CFO for both the Callaway campaign and the Energize Alberta Corp., considered a prohibited entity under the Election Finances and Contributions Disclosure Act (EFCDA), meaning it cannot contribute to a campaign or candidate. Based on financial disclosure and interviews with Eaton, Cameron Davies and Jeff Park, the commissioner found the former CFO was paying campaign staffers with money from Energize Alberta, amounting to unlawful contributions made to Callaway’s campaign from a prohibited corporation.” (CBC)

Bill Kaufmann on the “Notley-Trudeau alliance” charges: “Those accusations are cheap political pandering that do nothing to advance the Trans Mountain Pipeline and other economic development, Notley responded. “He can say whatever he wants. My job as the premier is to work with people in all levels of government, regardless of how much I do or do not disagree with them,’ she said.” (Calgary Herald)

Gary Mason on the reckoning Alberta leaders fail to anticipate: “The day is coming when oil money won’t be there to anywhere near the degree it is now. The day is coming when Alberta’s fiscal burden, including a mountain of debt, won’t be something that can be ignored by those who are supposed to be thinking long-term, but in reality only care about where the next vote comes from.” (Globe and Mail)

Emma Graney on the Alberta Independence Party: “A year ago, it was a jumbled group with assorted ideas. Now it has 63 candidates—12 more than the Alberta Liberals—and official party status. Scrolling through candidate photographs on the party website takes you past an impressive array of moustaches and creative facial hair, but a handful of women, Aboriginals, immigrants and a transgender candidate all feature on the party slate.” (Edmonton Journal)

Canmore’s newspaper on when the dominant industry dies: “But did the loss of a resource extraction economy mean the end of days for the sleepy coal mining town [of Canmore]? No it did not. Did the community and politicians spend the next five years lobbying the province to return coal mining to the valley? No they did not. What they did was rally around a new economic reality and found creative, collaborative solutions to build a future with different outcomes than had been assumed for decades.” (Rocky Mountain Outlook)