Why Leap isn't a manifesto for the people 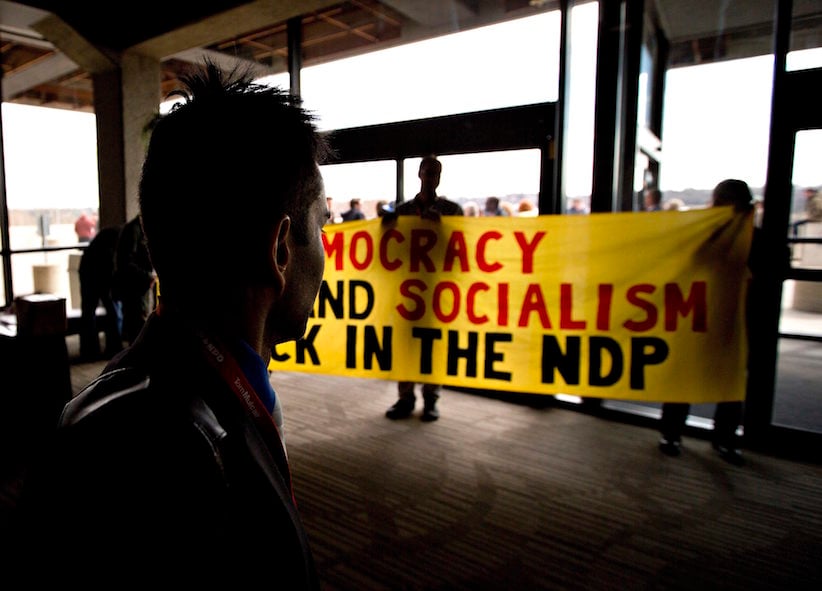 NDP delegates show a banner during the 2016 NDP Federal Convention in Edmonton Alta, on Sunday, April 10, 2016. THE CANADIAN PRESS/Jason Franson

The Leap Manifesto is overwhelmingly focused on the climate change crisis. While this is a fundamental question of our time, the way the authors of Leap have approached the issue has already driven deep fissures into the NDP. Although the manifesto is vaguely worded on most issues, it is insistent on stopping pipelines and comes very close to saying that resources should be left in the ground. There is very little in the document on how the transition to a green economy—an entirely good idea—would work.

In Canada, since the beginning of European settlement on Indigenous land began four centuries ago, the economy has centred on primary sector industries. The transition to a new economy is therefore fundamental. Very large regions of Canada are dependent on primary sector industries. Leap’s emphasis on stopping pipelines makes the highest priority the blocking of Alberta oil from being shipped to markets across Canada. When the Notley government in Alberta struggles in a difficult economic situation to push both a green and an egalitarian agenda, the manifesto offers little common ground for dialogue. The economic decline in Alberta and the rising unemployment its people face should be addressed in ways other than implying that Alberta resources are the enemy.

The Leap Manifesto is much harder on the extraction of resources than it is on the growing inequality that is at the heart of contemporary capitalism. Inequality in wealth and wages has now reached levels not seen since 1928 in North America. This needs to be the starting point for a contemporary socialist statement of principles.

How do we build the new green economy? That is the question. How do we employ workers in every region to do this? And how do we create the new green industries that will be at the heart of the new economy?

How do we ensure that large corporations no longer set the economic agenda and that the rich pay their share of taxes? How do we move to the elimination of tuition at post-secondary institutions in Canada at a time when so many young people are blocked from attending or are saddled by debt?

Related from macleans.ca: Avi Lewis on the ‘ideological battle’ over the Leap Manifesto

These questions are given very short shrift in Leap. Instead, the document suggests that most new jobs will be created in a host of caregiving sectors. That may sound good if you live in the Annex in downtown Toronto. But what does it say to miners in Sudbury, steelworkers, autoworkers, workers in the energy sector in Alberta, and to the young on Native reserves who have been abandoned by the larger society to a marginal existence?

And what about agriculture? Leap makes it sound as though we are about to shift to local agriculture directed at local markets. Have the people who wrote this ever looked at the agricultural sector in this country?

It’s no wonder that so many people are saying that Leap is a document for elites and not the majority of Canadians.

I don’t see the Leap as a manifesto of the left.

A political statement of the left would set out the predicaments people confront in Canada and the wider world. A good place to begin what would be a lengthy discussion would be to focus on the problems of a younger generation, one that is face to face with the increasing inequality in contemporary capitalism.

Related: The NDP’s hard left turn into an existential crisis

It is no accident that Millennials have taken up the struggle for a new politics in so many parts of the world.

They have been noteworthy for their political action in Syriza in Greece, in Podemos in Spain, and in propelling left-winger Jeremy Corbyn to the leadership of the U.K. Labour Party, much to the surprise and horror of the party establishment. The energy of the young has driven the highly effective campaign of democratic socialist Vermont Sen. Bernie Sanders for the Democratic Party’s presidential nomination. Hundreds of thousands of Millennials in France have taken to the streets to protest the tired Socialist government’s proposed changes to labour laws that would discriminate against young workers.

If the NDP wishes to reverse its decades-old shift to the political centre, it needs to begin by addressing the ways Canadians are up against an ever-more unequal society in which democracy itself is at risk. Out of that recognition of what capitalism has become in our time can emerge a strategy for a green economy that the population at large can create and endorse.

James Laxer is a professor of political science in the Department of Equity Studies at York University in Toronto. In 1969, he wrote the first draft of the Waffle Manifesto, For An Independent Socialist Canada. In 1971, he ran as the candidate of Waffle supporters in the NDP leadership race. He placed second to David Lewis in the field of five candidates, winning 37 per cent of the vote on the Ottawa convention’s fourth ballot.