Why Naheed Nenshi can lose in Calgary 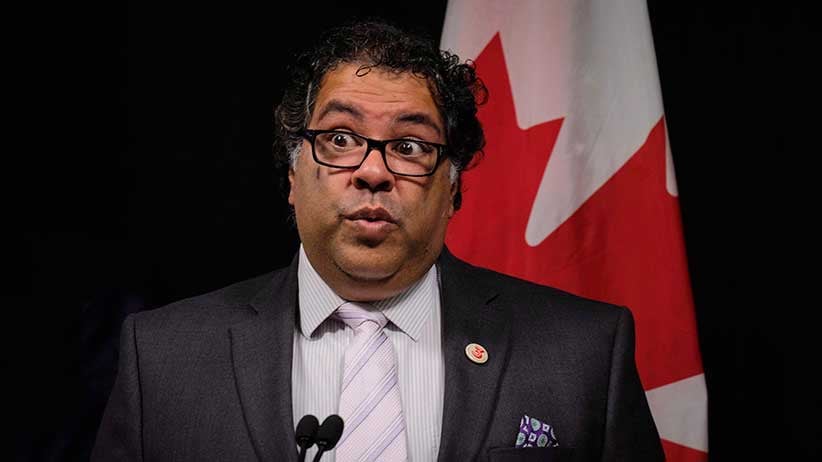 Like one Calgary cultural stereotype nesting within another, dozens of conservative activists in cowboy duds gathered last July for beef and beer on a restaurant patio. It was a Stampede party hosted by Alberta Can’t Wait, one of several political groups to rise in opposition to Rachel Notley’s NDP government. Jason Kenney (white cowboy hat) and Brian Jean (black cowboy hat) were at “Yahoo for Unity,” named for the merger between their respective Progressive Conservative and Wildrose parties. Federal Conservative politicos showed up too, including new leader Andrew Scheer. And some candidates for the fall’s civic election joined the party; Kenney mugged for photos sporting a “Bill Smith for Mayor” button on his Wrangler shirt.

Conservatives are taking that Alberta Can’t Wait cry especially seriously in Calgary, where they really can’t wait. Since 2015, they’ve been governed by Liberal Justin Trudeau federally, NDP provincially, and Naheed Nenshi locally. It’s a two-year wait before the federal and Alberta elections, but they might dispatch Calgary’s progressive mayor next Monday. They would replace Nenshi with Smith, a boutique legal-service firm owner, the Alberta PCs’ former president, and a nondescript figure foreign to Calgary civic affairs until local conservatives mounted an insurgent campaign around him in the spring.

Since shaking one’s fist at depressed oil prices is like yelling at clouds, Calgarians still smarting from the downturn seethe at a maelstrom of government moves: income tax hikes, pipeline decisions, carbon taxes, minimum wage increases, and some city hall matters like expensive, roadside public art and property taxes—the typical homeowner pays the city 55 per cent more than in 2010, the year of Nenshi’s come-from-nowhere victory. The bookish-yet-inspirational speaker and mischievously grinning urban booster has seen his coalition erode, his popularity sink and his right-leaning opposition harden. Slowly but surely, the question on local lips has changed. Until very recently, it was an incredulous “C’mon, can Nenshi lose?” With days to go before the vote on Oct. 16, it’s shifted between “Yikes, is Nenshi going to lose?” and “Can Nenshi win?”

It’s been a race sorely short on trustworthy polling, but the only sets of media-sponsored numbers out there, by Mainstreet Research, had Smith up by nine per cent in late September and by 17 points last week. The demographic breakdowns raise questions—the conservative candidate was way up among women in one Mainstreet poll, and among youth (Nenshi’s base) in another—so much so that University of Calgary political scientist Jack Lucas observed that such skewed results would be completely at odds with the history of election results in Canada. Then, on Wednesday, a pro-transit group released its own survey showing Nenshi up by 15 points; yet in that poll, respondents were first asked transit-friendly questions right up the current mayor’s alley. The Smith and Nenshi campaigns both say privately their own numbers show them ahead, but not by much. Nenshi could win. Nenshi could lose.

And if he is denied a third term, Nenshi will have fallen not only because of his growing reputation for arrogance, but because the local electorate had already turned on Notley and Trudeau, and wanted to thwack the nearest thing they could find. Conservatives have pent-up energy from past defeats, and crave victory—or at least practice before provincial and federal elections in 2019. One researcher from Reform Party founder Preston Manning’s namesake Manning Centre is running for councillor, and the conservative group’s training director is organizing for a fellow tax-fighting candidate. In traditionally slate-free elections, there’s a right-wing slate trying to sweep the Calgary public school board; in much of Calgary various candidates are trying to secure council seats with near-facsimiles of the Conservative Party of Canada’s blue lawn signs. (Bill Smith’s signs are in black and white, with as stark a slogan: “It’s time for a change.”)

The mood among the lean-government crowd seems to be a hunger to take Calgary back, return the mayoral gavel to conservative hands. Except, it hasn’t been there in a long, long time. Nenshi beat the blue-sign conservative rivals in 2010. His predecessor Dave Bronconnier, a former Chrétien Liberal candidate, beat a Tory MLA. Ralph Klein was the debt-amassing progressive populist mayor of the 1980s before he became an arch-Tory premier in the 1990s. You actually have to go back before the Second World War to find a Calgary mayor who campaigned and won with Conservative links, as Smith has. Why? Because, as historically conservative and anti-tax as Calgarians are, they like a city hall that provides them with stuff a booming (and sometimes busting) city needs: better transit, new highway interchanges, recreation centres and the like.

Though Nenshi first won by campaigning as a penny-watcher, he’s hiked taxes and often tried to make sure people appreciate what they get for it—less god-awful snow removal, a southeast transit expansion and a new central library. Now that wages in the energy sector have flatlined, gone down or ceased to exist, big ideas and big investments may have fallen out of favour.

Bill Smith’s campaign eschews grand proposals, other than promises to rethink various transit proposals. Those who knew him before knew him as a nice guy, but the angry calls flooding his campaign office prompted advisors to give him angrier, change-minded messages with classic conservative themes about out-of-control spending, damn-the-statistics crime worries and getting out of the way of business. In contrast to Nenshi’s bulging-eyed, passionate style, Smith is one-hand-in-my-pocket casual and monotonic. Unlike the brainy and detail-minded incumbent, the challenger is vague in a way that conveys a distinct incuriousness about city hall’s fine-grained issues: at the final mayoral debate, his answers suggested little more skill on the stump than that of the fringe and no-hope candidates seated around him. The clear sign he’s the front-runner wasn’t on stage; it was the constant applause from his many supporters in attendance. His campaign has been pocked with blunders and apologies, and the recent revelation a bailiff tried to seize his business property because he was behind on loan repayments, which Smith attributed to forgetting an address change.

None of these shortcomings may matter. The first crashing of a Calgary conservative wave might knock Nenshi out, assisted largely by a problem for Nenshi that reportedly keeps coming up at the doorstep: his arrogance. As he’ll insist, all politicians have a cockiness, but the flipside of Nenshi’s identity as a charismatic brainiac is his thin-skinned tendency to lash out if slighted, and a high-handedness that frays relationships and alienates allies. His Popeye-esque “I yam who I yam” defence works until it doesn’t, as a pile of examples suggests: a spat with a home builder that led to a drawn out and costly defamation lawsuit; a brash rant against Uber caught on video. And even though he comes out of the Calgary Flames arena spat looking far more fiscally shrewd than the owners, their exasperation with him helped build this narrative.

Despite his rhetorical shortcomings, Smith did twist the knife well at a Chamber of Commerce debate, comparing Nenshi to a promising job candidate. “They have great credentials, their references all check out, but as time goes along you realize they’re not the right person for the job,” he said. “They don’t listen to advice, they don’t keep their promises, they don’t learn from their mistakes, they don’t work well with others and they always think they’re the smartest person in the room. At some point you realize they’re holding you back. You fire them.” Nenshi later fired back: “Well, you wouldn’t hire anybody who has no idea what he’s talking about.”

Calgarians now get to decide if Nenshi’s flaws warrant turfing him in favour of a less qualified, less experienced candidate. That or they must wait, and mount their comeback in other elections.