Media fascination with the dark arts and 'evil political masterminds' isn’t new, writes Bruce Anderson. But it's a problem. 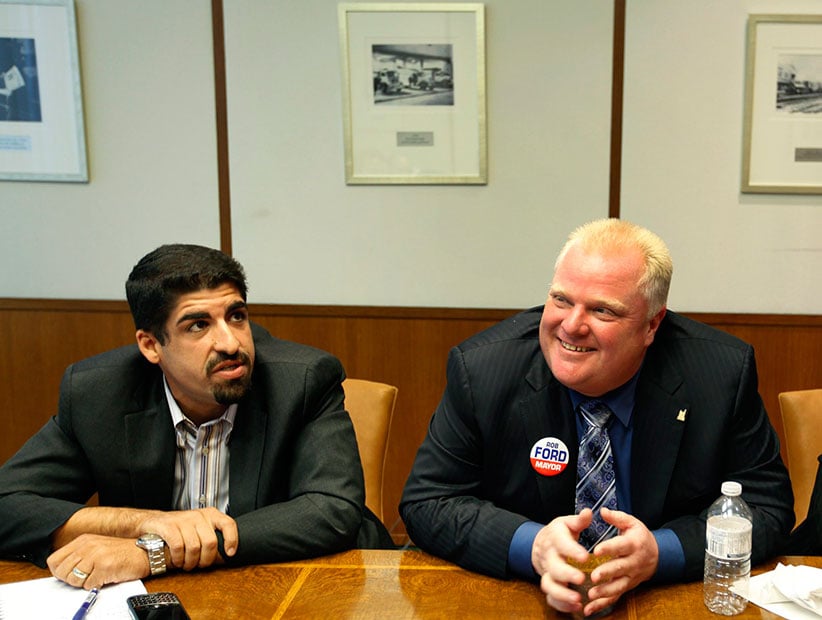 The recent Maclean’s piece about Kellie Leitch’s campaign manager, “How Nick Kouvalis turns candidates into winners,” is a must-read. It shines a light on a problem in the relationship between journalism and media.

Unintentionally, perhaps, the piece reads like an advertisement for political thuggery.

The so-called “brains behind Kellie Leitch,” Kouvalis is cast as a sort of rough-hewn genius, possessed of insight and skills that elude regular operatives.

Leitch is campaigning on a platform that is flimsy and cynical. She’s chosen to exploit the fears and resentments among some white people toward immigrants. She believes in freedom, but freedom to be like her, not to be like you.

Former cabinet colleagues criticize her crusade as lousy policy, designed to promote her own interests, regardless of risks to her party and the country.

There’s no credible rationale offered for her big idea to screen immigrants to make sure they have Leitch’s values. No detail about how it would work, despite months of time to prepare and reveal such details. Why bother? Angry people don’t want to sweat the details; they came for the hostility.

Leitch spent years at Stephen Harper’s cabinet table, a cabinet that often talked about security risks and immigration. She never spoke about this crisis that she now sees in our screening system.

Leitch and Kouvalis decided to start a fight in the town square by promoting an obnoxious policy idea. They gambled that the media would cover the fight more than the flaws in their platform. Along the way, a candidate known mainly for a lack of charisma would be recast as the only person willing to stand up for angry whites. Pardon me, I meant “real voters.”

If it works, journalism should bear some of the shame. Especially since we’ve all had a chance to watch the Donald Trump show play out on the U.S. stage.

To focus on the Kouvalis as “genius” line, the Maclean’s story treats the screening idea as sort of goofy, but irrelevant—what really matters here is that she’s looking like she got momentum.

The authors even breezily suggest, “If and when Leitch wins … Kouvalis will have plenty of time to pivot her toward more salient issues.” In other words, once she has motivated enough angry white bigots to win the leadership, she can drop the values nonsense and talk about stuff that really matters. A kind of get-out-of-jail-free card for pulling the wool over their eyes.

Readers have long been encouraged to see these individuals as winners, people who have what it takes. Those they defeat are simply unwilling to do whatever’s necessary. The outcome is neither good nor bad, just the law of the jungle.

But journalism shouldn’t try to have it both ways.

It’s fair to bemoan that politics is too often cynical, ruthless, amoral. But people notice when you stop bemoaning political thuggery for a moment, and heap praise on it.

Starved for revenues, news organizations are drawn to the sensational. U.S. cable news shows spent months currying favour with Donald Trump so that he would call into their shows and boost ratings with his trademark rants—only to watch in too-late horror as he crushed a field that included probably a dozen people who were more qualified than he is.

By the time some of these commentators got around to saying Trump was a mess of a choice, the Republican Party was stuck with him. Low-information voters had heard all they needed to hear: Hillary Clinton needed to be locked up, a wall needed to be built, Muslims needed to be banned.

In the initial, crucial months of the Republican primary season, Trump barely had to spend a dollar on his campaign, because his unplugged tweets were catnip to media who would flood their coverage with his antics, and then wonder aloud why none of the other candidates were able to get any traction.

As the shock waves settle, how are media dealing with this culpability?

Some attach themselves to the argument that the success of Trump, as with the interest in Leitch, is about what “real people” want, as opposed to the “elites.”

Self-comforting, but not really convincing.

In the Maclean’s piece, Kouvalis is described as a “low-information voter whisperer.” You know what this means. It’s code for the idea that voters who pay little attention can be told anything, and if you play to their jealousies and rages, you don’t need to do the hard work of coming up with and making a case for good public policy.

The formula is simple: make some people angry at some other people. About what? Doesn’t really matter what.

Today, Kouvalis crusades against red Tories and elites. Not long ago, he ran the campaign of John Tory. Go figure.

To write that Kouvalis has become one of the more sought-after political strategists in the country begs substantiation. Otherwise, it leaves the impression that everyone in politics carries the “say anything, do anything, just win” gene.

But to know politics well is to know that’s not really true. Most who run for office are genuinely well intentioned people, who are trying to do something good for their community.

Sketchy campaign techniques are as old as elections. But the modern version probably began with Richard Nixon’s infamous “plumbers,” and then rose to quasi-legitimacy at the hands of strategist Lee Atwater, who played senior roles under Ronald Reagan and George H.W. Bush.

Atwater famously told reporters that a candidate he was working against had been “hooked up to jumper cables” because of treatments the man had as a teenager suffering from depression.

When helping Bush against Michael Dukakis, he boasted he would “strip the bark off the little bastard” and “make Willie Horton his running mate”—a reference to one of the most controversial, racially oriented, negative ads in American political history.

In a biography of Atwater, conservative Robert Novak reveals that Atwater also tried to spread false rumours that Dukakis suffered from mental illness. The litany of dirty tricks associated with Atwater is stunning, and his elevation to positions of authority (he became chairman of the Republican National Committee) helped create a culture that said to future generations of operatives: nasty pays.

Atwater died in 1991. In the year that he struggled with brain cancer, he repudiated his past.

He wrote to the candidate he disparaged: “It is very important to me that I point out that one of the low points of my career remains the so-called jumper-cable episode … my illness has taught me something about the nature of humanity, love, brotherhood and relationships that I never understood.”

Atwater probably couldn’t have fully realized the demons that he helped unleash in modern politics. But we can. And it’s in everyone’s interest to stop pretending that deeply cynical politics is in any way admirable, or serves any broader interest.

When journalism casts an admiring, or even an indifferent, glance at the worst things that people in politics do, the decline of public trust continues, and the fallout spreads. Today, in America, only 20 per cent approve of their Congress, according to Gallup. Public trust in the media peaked at 72 per cent in the wake of the Washington Post‘s coverage of Watergate. Last fall, it touched a new low, at 32 per cent.

Most of the conversation about the future of the media these days is about the trauma caused by disruptive technology. But it would be a mistake to think that technology is the only—or maybe even the biggest—problem.