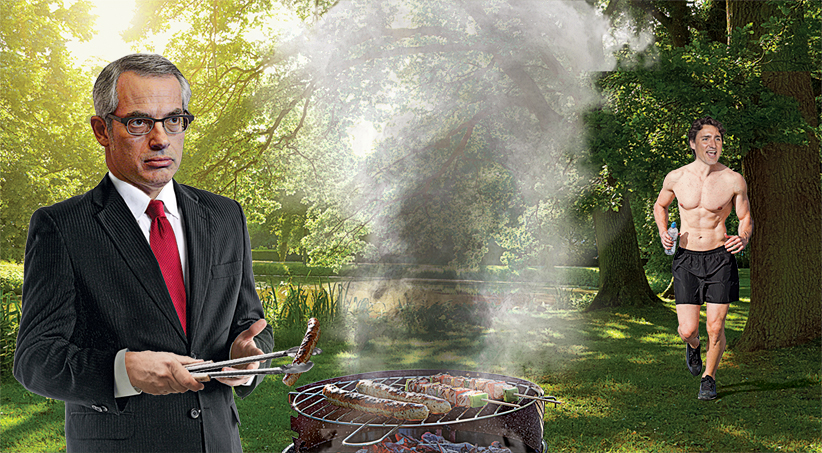 First, a family came across Trudeau while hiking in Gatineau Park. A selfie was taken, featuring bare prime ministerial shoulders. Days later, Trudeau was snapped shirtless in the background of a beach wedding. Some commentators managed to get worked up about this. Decorum and so forth! Delicate Canadian sensibilities! APPLY A CARDIGAN, STAT! They overlooked the history of world leaders going shirtless. Just think about Obama at the beach, or Putin on horseback, or Thatcher on G7 poker nights.

Here is something I believe to be true: If Stephen Harper looked like Trudeau, we’d have had 10 years of commercials for Canada’s Economic Action Abs. Dudes like Trudeau are going to go shirtless in the summer, and that’s cool. Guys like Harper and me will be in the shallow end wearing a T-shirt. Can someone please toss us our water wings?

The reason for this dull political season is pretty obvious: Both major opposition parties are in the midst of long leadership campaigns. The New Democrats, for instance, are holding their convention in October—of next year. Fewer than 500 days to go!

As a result, the NDP is down in the polls and giving off the same vibe as the sketchy pizza place I worked at as a kid, where the owner sometimes made payroll by betting at the track. If the similarities persist, we’re going to show up one day to discover the NDP is now a Baskin-Robbins.

Have you seen the rules for entry into the NDP race? Each candidate must get 500 signatures—at least half from “female-identified members,” and at least 100 from “other equity-seeking groups” including Indigenous people in Canada, LGBT people, persons with disabilities and visible minorities.

It’s great to see a focus on inclusion—but this is getting pretty specific, isn’t it? Will people be required to write their disabilities and ethnicities on the form? Will others be forced to write: “White guy, likes Brad Pitt but not in that way?” These guidelines are likely to grow only more specific. A generation from now, the NDP may be deprived of a dynamic leader simply because he couldn’t secure the signature of a bisexual Mexican with a bum left knee.

By the way, Tom Mulcair hasn’t shown up in the news much at all. And good for him. In the last year, Mulcair was rejected first by Canadians and then by his own party. In his shoes, I’d be spending the summer writing bad poetry and growing a second beard.

The Conservatives, meanwhile, will choose a new leader in May. Several people have already declared their candidacy. Together, if they put their minds to it, they could muster the charisma of a bowl of water.

Everyone in the media is praying that Peter MacKay enters the race. By Canadian standards, he has star power. Plus, there’s only so much Tony Clement that any nation can be expected to endure. “We have a standard, internally consistent philosophy of fiscal probity,” Clement said recently. This is how he talks at a barbecue.

Meanwhile, you probably followed the recent Green convention from start to finish, so you don’t need me to tell you it was a real humdinger. The highlight was Leader Elizabeth May’s speech to party members, during which she rambled aimlessly like the lead orator in a Donald Trump cover band.

“I don’t like the expression ‘holding someone’s feet to the fire,’ ” May said, for some reason. “It hardly sounds friendly. Can we start talking about how we have to hold their marshmallows to the fire?”

No, we can’t. Later, May offered a glimpse into how she prepared for last year’s election debates: She didn’t. “All the other leaders they have this weird cult thing . . .  they do mock debates.” (Formally, these cult members are referred to as “viable candidates.”) “I refuse to do it. That meant, nobody knew what I was going to say ahead of time, including me.”

This is a bit like a med student praising herself for eschewing the antiquated practice of studying for an exam. “I’m not part of your WEIRD CULT. I’ll just sew this esopha-tube thingy directly to the bum-butt and—boom—authentic, unscripted medicine!”