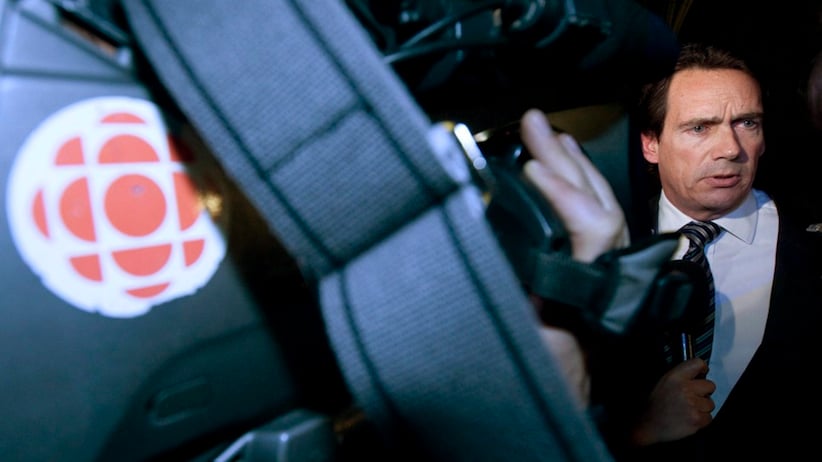 Quebecor President and CEO Pierre Karl Peladeau speaks with the media after testifying at the Commons Ethics Committee on Parliament Hill in Ottawa in 2011. (Adrian Wyld/The Canadian Press)

In the coming days, you are going to hear a lot of noise about how the star Parti Québécois candidate Pierre Karl Péladeau is a mean and nasty piece of work and a cynical opportunist of the first order; how his rightist economic views and anti-union stance are completely at odds with the social democratic underpinnings of the party; how he demonstrably lied about entering the coming Quebec election for months on end.

All valid points, sure—and for the schadenfreude-addicted among us, there is a certain delight in PKP’s ownership of the Sun newspaper chain and Sun News Network, those peddlers of jingoistic Canadian patriotism. Yet none of this will make a lick of difference in the coming weeks. In elections, noise doesn’t matter nearly as much as hard math, and in this regard PKP is a boon for the PQ’s goal of a majority government. Here’s why.

As Andy Blatchford of the Canadian Press pointed out the other day, the election will play out in a handful of ridings where the PQ finished a close second. St-Jerome, where PKP will run, is one such riding. As I noted recently, they are economically conservative and more or less allergic to referendum talk. It’s why the right-of-centre Coalition Avenir Québec took several of these ridings in 2012—and why the PQ risked losing them again in 2014. These ridings are also overwhelmingly white and Francophone; not surprisingly, the PQ’s so-called “Quebec values charter” had a certain resonance here. Unfortunately for Marois, the economy trumps identity issues for the typical CAQ voter.

Péladeau’s PQ candidacy changes all that. As I wrote last fall, he is a brutally effective businessman who took over his father’s business, Quebecor, and made it soar even further. He practically singlehandedly revamped the moribund Videotron cable concern and the TVA television station into a broad, multi-spectrum content creation and delivery system it is today.

At Le Journal de Montréal, he beat the living hell out of the CSN union federation, which represented its journalists, turning the paper into largely populist, right-of-centre respite. As former prime minister and current Quebecor board member Brian Mulroney pointed out to me, it continues to make oodles of cash in an era where print is supposedly dying. In a province where government looms large, he pushes the principles of free market and entrepreneurship.

On the identity front, meanwhile, Péladeau’s credentials are just as peerless. In 2007, his Journal de Montréal launched the “reasonable accommodations” debate that teetered into crisis for Jean Charest’s Liberal government. The paper has ridden this venal strain of quasi-ethnic nationalism ever since, which dovetailed nicely with the PQ’s so-called “charter of Quebec values” project last fall. And to what paper did the PQ first leak details of the bill, which would ban “conspicuous” religious garb from Quebec’s public service? Le Journal de Montréal.

His business credentials serve as a giant Band-Aid to her government’s questionable economic record. His name resonates on Montreal’s entire north shore and beyond, into the CAQ stronghold of Quebec City. Here, he is viewed as a near-deity for his pursuit of an NHL franchise. His media properties propagate exactly the kind of immigrant-wary narratives so popular in the very ridings Marois is targeting. Fallout from Péladeau’s free market, anti-union stance will benefit Québec Solidaire, which has almost no chance of taking any seats beyond the island of Montreal anyway. For the next three weeks, anyway, Péladeau is a dream candidate.

As for the long term? Ayoye, as they say. To say Péladeau will be a bull in the PQ china shop is a compliment to the male bovines of the world. The PQ is home to big, fragile egos, many of which have designs on the leadership of the party. I’m thinking of Jean-François Lisée and values charter architect Bernard Drainville. Apparently the two can’t stand one another, in part because they would both like to lead the sovereignist party. Imagine what will happen when Péladeau, Quebec’s ultimate alpha male, casts his shadow over them. Marois, too, must know that Péladeau likes to end up the boss of whatever he starts.

Then there’s the obvious ideological schism Péladeau creates. Yes, the PQ has always been a coalition between right and left; Lucien Bouchard, for one, could hardly be accused of being a social democrat. Yet in Quebec’s admittedly tilted political spectrum, Péladeau is the right on steroids. He hates unions, particularly the CSN, a traditional support base of the party. The strange bedfellows this creates are too long to list, but consider how Pierre Paquette, another PQ star candidate in Péladeau’s neighbouring riding of L’Assomption, was long secretary-general of the CSN.

But these are but clouds on the horizon. The PQ may very well collapse under the weight of its own contradictions should it win a majority April 7. Certainly, it has collapsed before. But Marois knows as well as anyone: the long term hardly matters right now. Math, not noise or clouds, will win a majority government. And by recruiting Pierre Karl Péladeau, she has shown she is actually quite good at counting.