Why the B.C. Speaker's constituents are still speaking to him

Voters in the Liberal stronghold of Abbotsford South have every reason to be furious with Darryl Plecas. Lucky for him, they're even madder at Christy Clark. 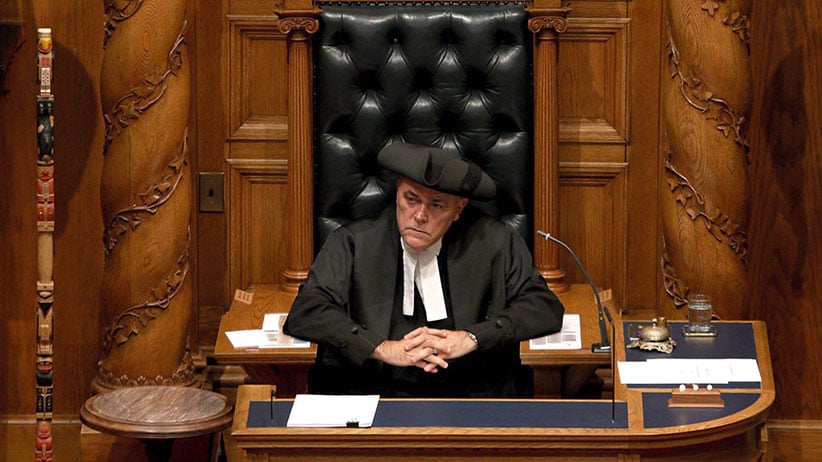 He’s now the Speaker, but Darryl Plecas isn’t talking. “I’m profusely sorry, but no interviews,” Plecas tells a reporter who turns up unannounced at his Abbotsford South constituency office.

A second-term member of B.C.’s legislative assembly, Plecas has been branded a “traitor,” a “liar” and worse, after he agreed to don a funny hat, sit in a tall chair and serve as master of ceremonies inside the public circus formally known as provincial parliament.

By moving to the Speaker’s chair, the former criminology professor inherits some fancy perks, including a spacious office that’s blissfully off-limits to the public and press; considerable oversight and authority over an $80 million-a-year legislative assembly operation; a 50 per cent increase to his $105,881 MLA salary. That spectacular hat is thrown in as a bonus.

There’s a flip side, of course. Plecas blew off his own party, the once mighty B.C. Liberals, whose members now sit pinch-faced on the opposition benches. The Plecas manouevre subtracted one MLA—himself—from Liberal ranks, giving the party 41 seats inside the assembly, same as the NDP.

But the NDP have formed government, thanks to a “confidence and supply agreement” it entered into this summer with the B.C. Greens and its three-member caucus.

RELATED: Why the B.C. Liberals should suck it up and offer a Speaker

The Speaker’s old Liberal benchmates are publicly furious. Judas, cried interim Liberal leader Rich Coleman, when Plecas assumed the Speaker’s chair early in September. “It’s a betrayal,” he snapped. “I don’t have to respect him.” The party promptly booted Plecas from its caucus and revoked his Liberal membership. He now serves his Abbotsford South constituents as an Independent.

The riding’s B.C. Liberal association president insists Plecas gave no indication he was interested in the Speaker’s job. “That took me completely by surprise,” says Ron Gladiuk. “I thought Darryl would have at least mentioned it to me before going. Maybe that’s what he was worried about, that we’d try and talk him out of it.”

Gladiuk calls the move “a political coup” staged by the NDP. “They found the weak link in the chain. They found that person in Darryl. It’s very disappointing.”

Perhaps he was never more than a convenient Liberal, convinced to run by party brass impressed with his stature as an oft-quoted criminology professor at the University of the Fraser Valley, which is based in Abbotsford. According to Hamish Telford, a political science professor at the same school, Plecas is “a bit all over the map, politically.”

In any case, there’s likely no precedent for what Plecas has done. Telford says he’s not aware of an opposition party member in B.C. ever accepting the Speaker’s position. Yet there’s been little uproar in Abbotsford, outside the Liberal party membership. “The public doesn’t seem terribly animated about this,” notes Telford. It’s been a nutty few months in provincial politics, even by B.C. standards; the Speaker shenanigans follow some scene-stealing Liberal loop-the-loops.

RELATED: How the B.C. Speaker should manage a messy House

To wit: A B.C. Liberal dynasty rides into an election campaign, buoyed by a roaring economy and strong poll numbers, yet somehow blows a May election; a desperate Christy Clark tries clinging to power, essentially re-writing her party’s campaign policy book in a Hail Mary, “we are now listening” throne speech, but she’s foiled by that “GreeNDP” alliance and rebuffed by the province’s lieutenant-governor; Clark gives up the fight and quits politics altogether. Oh, and B.C. gets its first minority government since 1952.

Then came—or there went—Plecas. For weeks prior to his decampment, he’d denied any interest in the Speaker’s chair, telling the Abbotsford News in June that “it would be very disrespectful of me, very dishonourable, for me to do what would in effect be crossing the floor.”

Later in the summer, before Clark bailed out as leader, rumours surfaced that Plecas had spoken ill of her at a caucus retreat. The rumours were true, he eventually acknowledged.

That sort of candour—belated or not—thrills the likes of local political blogger Gerda Peachey, a self-described “very conservative” voter in what is a decidedly conservative community. Agrarian and noticeably Christian, Abbotsford is often described as B.C.’s “bible belt.” It never leans left. Created in 2008, the riding of Abbotsford South has always elected centre-right B.C. Liberals, by wide margins of victory.

Does Peachey have a problem with Plecas and his surprise bolt? No, she does not. Just as she did not enjoy the Liberals’ about-left “clone speech.” “I tend to be very jaded about almost everyone who gets into power,” she says. “But here’s a guy who has a mind of his own. I would love to see more of his type in the legislature. Most of my friends think he’s a good man and would vote for him again. He may be the Speaker, but he still works for us.”

RELATED: The brave new world of policy in British Columbia

And it’s true: Plecas can continue to meet with his constituents and try to have their concerns addressed; however, parliamentary tradition restricts him from voting on legislation, except when he’s needed to end a stalemate. Even then, he’ll be expected, as Speaker, to vote in favour of the status quo, essentially voting down proposed new laws and amendments.

Such is the Speaker’s lot. Plecas says the role suits him well. “I’m the most non-partisan guy there is,” he insists. He apologizes once again for refusing an interview—people inside the Speaker’s Office have told him to zip it—but he will offer this: He still has allies inside the Liberal party, “caucus colleagues who are supportive but have to maintain a public stance.”

He won’t say who. The Speaker turns and closes the door to his office, instead.