Legalization has brought jobs by the hundred to places that desperately need them. Yet many of those ridings are poised to vote Conservative. 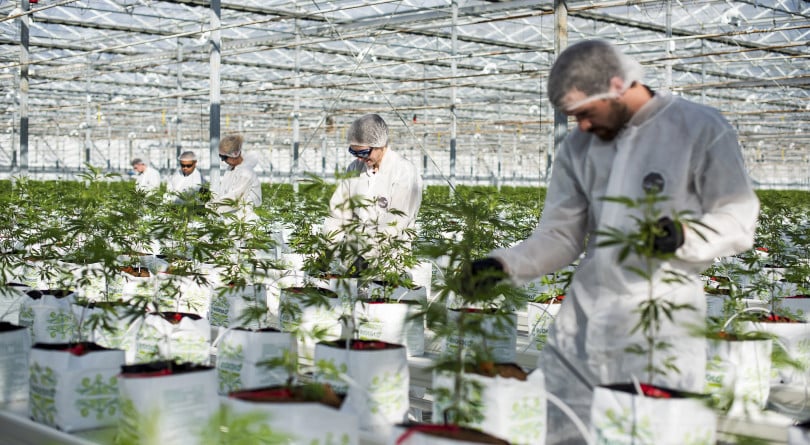 In 2018, the veteran Conservative MP Scott Reid was the only Tory who voted in favor of the Liberal government’s policy to legalize the recreational use of cannabis. After nearly two years, he has no regrets.

“The marijuana industry is currently the largest single private-sector employer in Lanark-Frontenac-Kingston,” Reid says of his riding in eastern Ontario. “It did not make sense when alcohol was prohibited. It does not make sense for marijuana.”

A vivid illustration of what the business has done for Reid’s riding can be seen in the abandoned Hershey’s chocolate factory in Smiths Falls, which now is taken over by Canopy Growth and transformed to a sprawling marijuana grow-op and production facility. The company employs 1,300 people in the former manufacturing town about an hour’s drive southwest of Ottawa; it’s now the largest pot company in the world, with a market value of more than $11 billion.

In short, the Liberal government’s decision to push forward with legalization has proved a lifeline to the Smiths Falls, filling a void as manufacturers scaled back their workforces or picked up and left town. But if you thought the Liberals were about to reap votes in the region for their efforts, you’d be wrong. Poll averaging provided to Maclean’s by 338Canada.com suggests the riding is a virtual lock for Reid and the Conservatives, with just seven weeks to go before the election.

It’s a peculiar irony playing out across the country. In the handful of ridings where marijuana production has brought much-needed jobs and economic activity, voters are leaning to the Conservatives or other parties. Langley-Aldergrove has enjoyed a rapid rise in marijuana-industry operations in B.C.’s Fraser Valley, including an eye-popping 12-hectare greenhouse complex built by Canopy. But it is currently likely to go to the Conservatives to the tune of 44.5 per cent, according to 338Canada.

The Tories also enjoy a comfortable lead in Chatham-Kent-Leamington, where Aphria Inc. is running nearly two million sq.-ft. of greenhouse space, hiring more than 650 workers. In April, a medical marijuana producer with links to Canopy, PharmHouse, announced it was building a$150 million facility, also to be located in Leamington, and held a job fair to fill 100 positions.

It’s the kind of economic boost for which campaigning politicians love to take credit: the near instantaneous creation of a fast-expanding industry. In 2017, before legalization, about 1,400 people were working in the cannabis sector across the country, according to Statistics Canada; this year, there are 9,200 and counting—a near-sevenfold increase.

Why, then, aren’t the Liberals seeing any political payoff?

RELATED: Why French’s ketchup is here to stay (sorry, Heinz)

In part because of a longstanding fact of Canadian political geography. Rural Canadians are, on balance, less likely to vote Liberal than their urban counterparts. And big grow-ops tend to locate in the countryside and small towns. They need open space, along with a ready supply of agricultural supplies and labour.

Still, the inability—or reluctance—of the Grits to capitalize on one of their signature legislative achievements is curious. Kayley Kennedy, the Liberal candidate for Lanark-Frontenac-Kingston, grew up just outside Smiths Falls. She can rattle off departed employers Canopy helped replace—Hershey, Shorewood Packaging, Stanley Tools.* But getting voters to link that success with her party has proven a challenge. “We have to make the connection that it was our Liberal government that was responsible for the legalization,” she says, “and it’s having a direct impact on our community.”

One problem for candidates like Kennedy: neither Prime Minster Justin Trudeau nor any other senior Liberal seems keen to talk about the policy. Perhaps because the rollout of legal marijuana, left mainly in the control of provinces and municipalities, has been rocky at best. In some places, the black market continues to provide superior supply and quality of cannabis. In others, local residents worry about the proliferation of pot shops and public use of the drug, a sign that the social stigma around marijuana is still strong.

On a more practical level, it’s an indication of how limited the bandwidth of a campaigning party tends to be—especially the governing party. “Scandals that break out during the election season almost always shape the messaging,” say Nelson Wiseman, a political science professor at the University of Toronto. “So, explosions, as we had with the SNC-Lavalin [affair], usually dominate the narrative and become a defining issue.”

RELATED: The marijuana nightmare: Trudeau is legalizing weed, but it hasn’t been pretty

Wiseman also notes that in the last election cycle, marijuana legalization motivated a lot of young people to vote for Trudeau. Now that it’s legalized, he says, the issue is largely “water under the bridge;” the Liberals need new ways to stir those voters, or they must woo different voters.

The good news for them is that Scott Reid is an exception that proves the rule. Most Tory candidates are in no position to capitalize on industrial cannabis growth, having opposed legalization or voted against the Trudeau government’s legislation.

That’s true in Chatham-Kent-Leamington, where Conservative MP Dave Van Kesteren was a fierce critic of legalization, arguing that “youth as young as 18 will be able to legally purchase marijuana from government outlets, and use this drug with virtually no restrictions.” Van Kesteren took that position at a time when Leamington—situated on the shores of Lake Erie and known as the tomato capital of Canada—was reeling from the departure of Heinz Ketchup, an employment mainstay in the community for more than century.

Van Kesteren announced about year ago that he plans to retire from federal politics. But Katie Omstead, the Liberal candidate in the riding, is doing her best to remind everyone of his stance on weed. “I’m out on the doorsteps every day, and there is a lot of gratitude that cannabis legalization finally happened,” she says. “It’s important for voters to recognize that this could have been a lost opportunity in our riding economically, that we currently have an MP who was vocally against this.”

RELATED: If I’m listening to Justin Trudeau it means others are too

Maybe, but the new Conservative candidate, David Epp, isn’t about to make the same mistake—not with Aphria saying it plans to ramp up its operation and add hundreds of new jobs in response to a countrywide supply shortage and anticipated global demand. (The company had its first profitable quarter in early August, thanks to a 75 per cent increase in sales over the previous quarter.)

All of which leaves Liberal candidates reaching for ways to make use of their party’s biggest legislative win. Omstead, for one, thinks the party should push on with the cannabis revolution, touting its plans to provide clemency for those with criminal convictions for possession and to cut off a longstanding source of income to organized crime. “With new economic opportunities comes new talent who are moving into our region and reconnecting with rural roots,” she adds.  “It serves as a good example of how to revitalize our rural communities.”

She might be on to something here, and looking back, it’s hard to dispute the enormity of the government’s achievement—it led to one of the greatest legal and cultural shifts in recent memory. In some places, the benefits are already starting to flow. The question is what, on the morning of Oct. 22, the Liberals will have to show for it.

CORRECTION, Aug. 28, 2019: The original version of this post misstated the names of Shorewood Packaging and Stanley Tools.