Jason Markusoff's Alberta Politics Insider for April 10: One thing the polls tell us, rebuilding the 'firewall,' and more 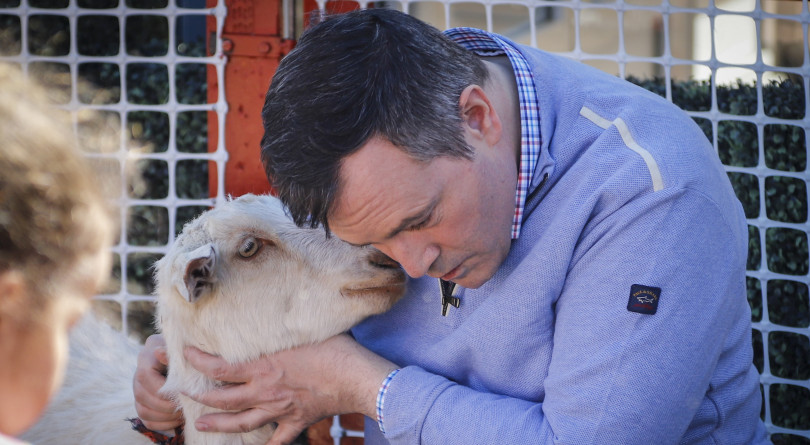 Kenney attempts to show his softer side, as polls suggest female voters are less likely than men to support him. (Jeff McIntosh/CP)

The latest Alberta polls consistently show the race tightening, but the detailed data is all over the map. Think HQ says the United Conservatives are up by 16 percentage points in battleground Calgary and behind 20 in Edmonton, while Ipsos has narrower single-digit leads for the respective parties in both big cities. Yet? Two clear trends emerge among all surveys: the United Conservatives are on track to win a majority, and Jason Kenney’s party is faring disproportionately poorly among Alberta women.

Ipsos reports a 10-point lead for the UCP among men, but only four points among women. That six-point swing between the genders is modest compared to most surveys. Mainstreet has it at a 22-point variance; Forum at 17, Janet Brown Opinion at 18, Leger at five, and Think HQ finds that women prefer the New Democrats by one point, but they trail among men by 16—another 17-point gender swing. This gap is about as wide as the stark opinion gulf between males and females in last year’s U.S. congressional election, in the middle of polarizing Donald Trump’s first term. Dig deeper into the Alberta data, and we find that women are far more likely than men to disapprove of Kenney, to have favourable opinions of Notley, and  to prioritize social service files like health or education or economic ones (though jobs and the economy are still the top Alberta priorities among both sexes).

You can find the split with Alberta families. When I canvassed with a Calgary UCP team last weekend, they’d rate one member of the household as a 1 (surefire vote for UCP) and another as a 5 (no chance of voting UCP). A husband says he’s a big supporter, but declines a blue lawn sign—his wife strongly disagrees with his opinion.

Anne McGrath, running for the NDP in must-win Calgary–Varsity, has encountered visible signs of the gender gap more than she’s used to in federal races or the 2015 provincial contest (when polls picked up a lesser gender gap, too). At one door, a woman greeted McGrath, said she’ll vote NDP, and then motioned with her head toward the inside of her house: “This guy, not so much,” McGrath recalls the woman saying. At another house, a woman complained her partner is a Trump supporter but she asked for a lawn sign—“the biggest one you’ve got.” At a third, a male resident was chewing out the NDP candidate on his lawn, while her volunteer at the doorstep registered the female resident’s support.

Based on attitudes revealed in surveys, women may be more attracted to the NDP’s $25-a-day child care promise; guys might be more drawn to Kenney’s plans to get tough and litigious with Ottawa and pipeline critics. When social conservatism is an issue in elections, the gender gap often becomes more pronounced, says Melanee Thomas, a University of Calgary political scientist. UCP candidates’ positions on LGBTQ issues and abortion would inflame those tensions. The economic downturn has also been much harder on men and male-dominated sectors like the oil fields, while the recovery has disproportionately benefitted women, economist Trevor Tombe has noted. Kenney started his campaign with appearances in front of all-male backdrops of men in hardhats and coveralls; Notley had an industrial crowd standing behind her, but ensured a few women were in the shot, too.

This isn’t the only demographic split, of course. Young people are more NDP-friendly, while seniors like the UCP, a classic divergence. As both sides try to solidify their support—in Notley’s case, by peeling more votes away from Kenney—it will be interesting to watch if they bid to bridge this gender divide, or play more blatantly to their own bases of blue dudes and orange women. Whether the NDP try to play up abortion and health care as issues, and how alpha Kenney acts.

Diplomacy and the bullhorn

Screenwriters couldn’t ask for more glaring visual contrasts from the campaign’s main two leaders Tuesday morning. Notley sat at the end of a boardroom table at as she testified via videoconference to a Senate committee on the Liberal government’s bill to ban oil tankers on B.C.’s north coast. At the same time, a Senate committee was in Calgary for hearings on Bill C-69, the environmental assessment act. Kenney didn’t enter the hotel conference room—he rolled up in his campaign’s blue pickup truck and joined the protest outdoors. He revved up the crowd with a megaphone. “We need leadership now that will stand up and fight back against these polices that are damaging our prosperity.” Notley offered her own rhetorical knuckle-rapping, calling the tanker ban “a stampede of stupid”—but in a more genteel tones.

These are Alberta’s election offerings in a nutshell. When the chips are down, when it feels like its back is against the wall, does Alberta want a premier who persuades at the committee hearing, or hollers into a protest bullhorn?

For this month’s print edition of Maclean’s, your humble(-ish) newsletter author wrote a feature about Jason Kenney’s firewall-inspired approach to federalism, which feeds on the growing sentiments of western alienation that can border on separatism. In his bid to lead Alberta, Kenney openly takes inspiration from Quebec and its secessionist-minded demands for a better deal:

The UCP leader fancies the threat of an equalization referendum as his constitutional hammer, but it may carry none of the weight he imagines, Maclean’s found. Legal scholars say the foundations for the idea are highly questionable, while Kenney’s party could point to no legal experts who back up their argument aside from the firewall author and political scientist who inspired the UCP platform plank. Read more about it here.

James Keller on Jason Kenney’s battle for Alberta: “His vision is of an Alberta that reclaims its place as a ‘natural and historic’ leader among Canadian provinces, both in terms of economic prosperity and social mobility. He also argues that losing the election would alter the province’s political environment so dramatically that it would imperil the conservative movement across the country. As for the potential effect on the province’s grievances and sense of alienation, he said ratcheting up the fight now, perhaps counterintuitively, could prevent something darker later on.” (Globe and Mail)

David Staples on Alberta’s rolling boil: “So here we are, with reasonable oil industry insiders alarmed like never before and with a moderate like Notley suddenly sounding just like the hawkish Kenney on key points. Albertans are coming together in fear and anger, the only question is whether Trudeau will wake up to this uprising.” (Edmonton Journal)

Madeline Smith on the NDP environment minister’s fight for a key seat: ”In the 2015 provincial election, nearly all the other ridings in southern Alberta’s smaller or rural communities voted for the now-defunct Wildrose Party, with the exception of a narrow NDP win in Medicine Hat to the east. But the riding of Lethbridge-West was a blowout. The NDP’s Shannon Phillips defeated incumbent Progressive Conservative Greg Weadick nearly three votes to one. The chances of the NDP winning again in most of Alberta’s smaller or rural communities appears slim to none, and Lethbridge-West could test whether the party’s 2015 success has any staying power outside Edmonton and Calgary.” (The Star Calgary)

Dan Barnes on what Fort McMurray wants: “Now, mere days from a vote that again promises significant political change for Alberta, the most pressing needs and wants of a city and region tied inexorably to the health of the oilsands are obvious: a provincial government that can get a pipeline or two approved and built, and ensure that reasonable tanker access on the West Coast is restored. And, if it’s not too much trouble, a Costco would be nice. Homeowners, business owners and the regional government need political help from above, and many are pinning their hopes on the right-wing United Conservative Party, in keeping with the region’s historical political leanings.” (Edmonton Journal)

Gary Mason on the dangers of Kenney’s tough talk: “For Mr. Kenney, it’s all about Making Alberta Great Again. My own sense is that it may not go quite as smoothly as he’s promised. His bully-boy tactics might incite heavy applause on the hustings but will wear thin in the rest of the country pretty quickly. Far from making his province a sympathetic figure, Mr. Kenney could well make Alberta loathed by those who don’t like the sight of political leaders threatening or intimidating others.” (Globe and Mail)