Why wrestlers like Kane have a strange hold on American voters

If politics is theatre, then no candidate is more authentic than the new mayor of Knoxville, Tenn. 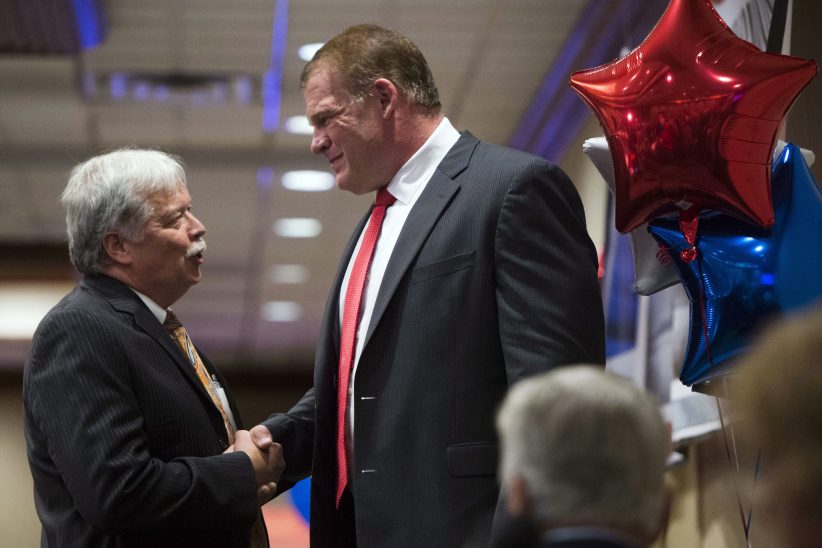 World-famous when masked but now enthroned in what most Americans see as the kingdom of the bald-faced lie, the newly-elected mayor of Knox County, Tennessee sits down to lunch, a one-pound burger buried alive in his big, soft hands. The rookie politician, costumed in grey pinstripes, a faintly checked shirt, a subtle tie and tan shoes, is short-haired, gap-toothed, and at least three times the size of everyone else in a place called Sam & Andy’s in a suburban strip mall just off the screaming freeway.

There are some uniformed sheriffs and deputies in the restaurant, numerous local officials in suits, and plenty of civilian lunch-grabbers, but nobody makes an obvious, especial fuss over His Worship; no autographs, no selfies. They know him here in Knoxville, but not only for what he was—the blood and the fire, the feuds and the kayfabe, the faces and the heels, the steel cages and the percussive pile-driving of his furious previous life.

As politicians go, the new mayor, a local insurance salesman who was inaugurated just after Labour Day, is fortunate. Asked to name the single most urgent crisis facing Knox County, Tennessee, the café’s owner, a man named Chris Captain, answers, “I can’t think of any off the top of my head.”

“Potholes on the Interstate,” suggests a customer named Donna, but Interstate 40 is not a county-owned cow path and so patching it is not something that the big man—he is Glenn Thomas Jacobs, 51, who has wrestled professionally and pyrotechnically for more than 20 years, mostly under the ring name “Kane”—needs to undertake.

“Lighting the way for our future” was Jacobs’s wink-wink campaign slogan, with a burst of flame in the font. He brought in his erstwhile Brother of Destruction, the Undertaker, to headline a campaign rally, won his three-way primary on May Day by 17 votes out of 40,000 and swept the general election by 66 per cent to 33. A self-described “voracious reader” and “newshound,” he comes to the job as a libertarian, low-tax, small-government crusader, but then so did many of the Republican members of the U.S. Congress who are adding a trillion dollars every year to the U.S. national debt.

An explication for the under-enlightened. Glenn T. Jacobs, the son of a U.S. Air Force veteran of Korea and Vietnam and the holder of a university degree in English literature, has wrestled professionally and flamboyantly for the past quarter-century, usually as “Kane,” the deranged, fire-scarred, masked, unmasked, masked, unmasked, masked, unmasked, etc. half-brother—“the devil’s favourite demon; the big red retard”—of a fellow incarnation of evil—“the man who Satan calls ‘Sir’”—known as the Undertaker. Together they form the Brothers of Destruction, which has not prevented them from turning on each other from time to time to time in locked cages and other friendly confines; nor has it stopped Kane from launching fireballs from his gloved hand into the eyeballs and other sensitive regions of adversaries both male and female.

All is which makes politics a step down in class.

“Everything that government does is based on the use of force,” Jacobs says, “whether people want to acknowledge that or not, and it impedes the ability of civil society to function.

“We look at government programs as being compassionate, but if you look at it, they’re  all funded by tax money. People don’t really have a voice in how much money is taken from them by taxation. Every few years, politicians say it’s going to be this or that and that’s it.”

There is no need to label subject and interviewer as Kane and Abel, but you can if you really want to.

RELATED: Why Jinder Mahal is a game-changer for the WWE

Glenn Thomas Jacobs is hardly the first career athlete, or the first performing artist, or even the first over-muscled, histrionic, crowd-hated grappler to seek and gain both public office and the public’s love. For one, Jesse (The Body) Ventura was elected governor of Minnesota in 1995, then gave it up after a single term. For more than a century, professional wrestling has been the perfect quintessence of physicality and theatre—the outcomes may be scripted and a man’s role as a hero or a villain may be mutable over time, but there is nothing illusional about a superheavyweight’s vault from the turnbuckle, or body-slamming Andre the Giant. Wrestling is hard, and it hurts, and its long-term toll on too many men has been an unconquerable pain.

Consider, then, these two Republican officeholders:

Donald Trump is a member of the World Wrestling Entertainment Hall of Fame. (Remember him body-slamming and then shaving the head of Vince McMahon at Wrestlemania XXIII? Remember him appointing Linda McMahon to the head of the Small Business administration after she donated US$6 million to his campaign?) 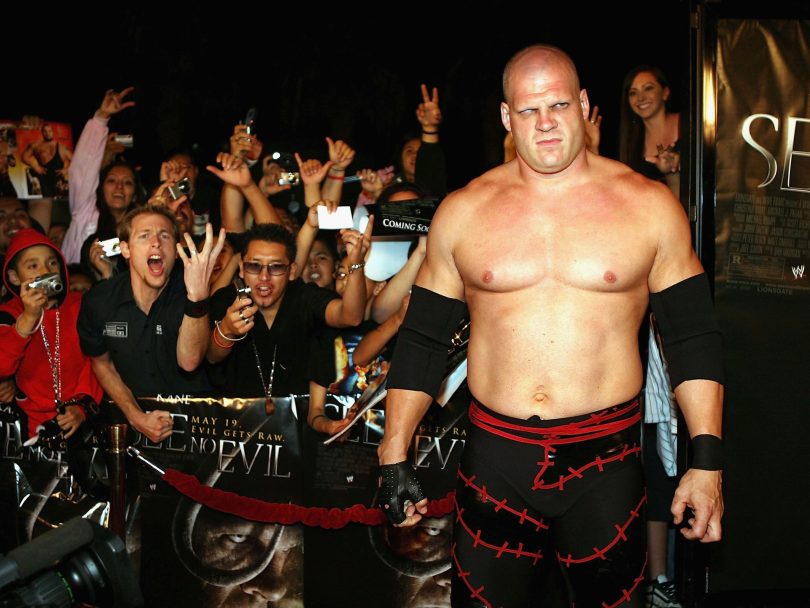 Jacobs arrives at a movie premiere in 2006 in Orange, Calif. (Michael Buckner/Getty Images)

Kane is not a member of the hallowed Hall, at least not yet.

“What’s the difference between a politician and a pro wrestler?” an attendant was asked at a filling station in Knox County, Kentucky, which is another of the nine states with a county named for General Henry Knox, the republic’s first Secretary of War. “Wrestlers wear cute little shorts,” she replied.

“You know, Donald Trump puts on a hell of an arena show himself,” it is suggested to Mayor Glenn Jacobs at Sam & Andy’s in Knoxville, Tennessee.

“Local politics is different,” he responds. “At some point, people have to see substance.”

“Why aren’t you a liberal?” Hizzoner is questioned. (Local governments in the Volunteer State are subject to considerable jurisdictional overlap and confusion—Kane/Jacobs is the mayor of Knox County, which includes the city of Knoxville, but the actual city of Knoxville has a separate mayor of its own.)

“Liberals believe that government should run everything and try to take it over,” is the solon’s response. “The conservative position is you try to minimize that.”

Glenn Jacobs resists the suggestion that he someday might flex for higher office, whether statewide like Ventura, or even nationally. “If you run for Congress,” he says, “there are 435 Congressmen and a hundred senators. What does one actually do in that huge block of people? What difference can you make if you’re only one per cent?”

In a 51-49 Republican Senate, the truthful answer, of course, is existential. Tennesseeans will vote in November to fill the seat being vacated by the retiring Republican Robert Corker, Jr. the pesky fly in the presidential ointment whom Donald Trump calls “Liddle Bob.” (CNN has called this death-match “the single most important Senate race in the country.”) The state’s senior senator, Lamar Alexander, will be 80 when his term expires in 2020.

“Do you see him heading for higher office?” Chris Captain is asked when the big man leaves.

“Without a doubt. Without a doubt,” he replies. And there is a rend in the kayfabe here, too—Captain’s wife’s father is Kevin Sullivan, a long-time grappler out of Boston, mostly in second-tier circuits, often as a heel. So Captain—formerly Kaptanopoulos—understands the extraordinary demands on these men and their molls as actors, and as athletes, bashing each other with pulled punches and real metal chairs.

On the wall next to the cash register is an autographed photo of Jacobs-as-Kane, wild fake horror hair, red-streaked leather mask, and all.

He can connect with real people,” says Captain, “and that’s why he’s going to go further.”

“Good, bad, greed—they are in all of us,” the restauranteur says. “That’s what wrestling brings out in everyone. Babies aren’t taught to cry. We’re born that way.”