Will Canada help save Ukraine?

Justin Ling: While America tries to rally support and spell out real consequences for a Russian invasion, Ottawa’s attention seems to be elsewhere 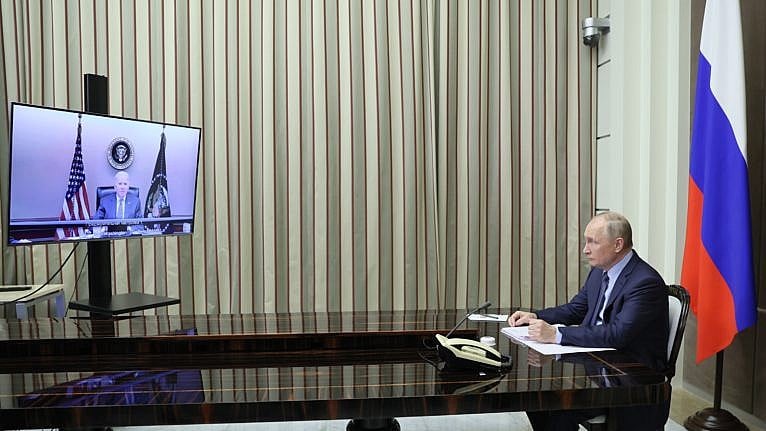 Putin is shown during his talks with Biden via videoconference in the Bocharov Ruchei residence in the Black Sea resort of Sochi, Russia, on Dec. 7, 2021 (CP/Mikhail Metzel, Sputnik, Kremlin Pool Photo via AP)

When President Joe Biden got off a video call with his Russian counterpart on Tuesday, he started working the phones: Paris, Berlin, Rome, and London were all on his call sheet. He was building a unified front of countries looking to send a strong signal to Russia that an incursion into Ukraine would come with dire consequences.

It’s an awkward omission. Canada has been a significant donor to Kyiv, both in terms of humanitarian assistance, capacity-building, and military support. The Canadian Armed Forces has 200 personnel stationed in Western Ukraine, in Lviv, conducting training exercises with the Ukrainian military. And, geopolitically, few countries have been as boisterously supportive of an independent and sovereign Ukraine as Canada.

As a significant Russian build-up amasses along their shared border, U.S. intelligence says there is a strong possibility that Moscow could move upwards of 100,000 soldiers, with air support, into Ukraine—possibly as early as January. It will take significant diplomatic, economic, and political pressure to avert such an outcome: And Canada is taking a backseat.

In recent years, Prime Minister Justin Trudeau’s foreign policy posture has been a slouch. As experts, both in and out of government, have expressed to me recently: Canada signs statements, it doesn’t even write them. If Biden is on the hunt for states willing to make bold commitments to dissuade Russian aggression, it’s no great surprise Canada was forgotten.

Sources in the Trudeau government confirmed that there is no call scheduled between either Trudeau nor new Foreign Affairs Minister Melanie Joly and their American counterparts to debrief following the conversation with Putin.

The Canadian Armed Forces have made clear that no additional troops would be heading to Lviv, in Western Ukraine, to step up training of the Ukrainian armed forces. Asked repeatedly what sanctions or economic penalties Canada could impose on Moscow, should it invade, no one in government could say—except that Ottawa would consider any package put forward by its NATO allies.

America has tried to lay out the consequences in plain terms, threatening to pull Russia’s access to the SWIFT payment system—when that move was previously bandied about, it was estimated the Russian economy could shrink by five GDP points as a result. America has additionally obtained assurances from Germany that it would shutter Gazprom’s Nord Stream 2 pipeline, the state-majority-owned gas company supplies roughly a third of Europe’s gas. Biden reportedly communicated additional economic measures that would be devastating to the Russian economy.

In a briefing with Senators on Tuesday, State Department official Victoria Nuland underscore that “we are also warning of severe costs and consequences, including deploying far harsher economic measures than we have used before, if Russia chooses the path of confrontation and military action.”

Ottawa’s attention seems to be elsewhere, even when the conversations are happening in its own living room.

During Tuesday’s U.S. senate foreign relations committee hearing, Democratic Senator Jeanne Shaheen raised an interesting—and disconcerting—issue at play: After a rocky couple of years, Belarus has come back into the Russian fold. Belarus has even conducted joint military drills with Russian forces on the Ukrainian border in recent weeks. That “presents another front for the potential for Russia to invade Ukraine,” Shaheen explained. “I know the Ukrainians view it that way, because we heard that when we were in Halifax for the [Halifax] International Security Forum and met with some Ukrainian officials.”

I saw Senator Shaheen at the Forum in late November. I didn’t, however, see Foreign Affairs Minister Joly. Our new defense minister, Anita Anand, was there for just a few hours before jetting off. A read-out of her presence at the Forum doesn’t list any meetings with Ukrainian officials.

If one of those ministers had been there all weekend, they would have heard a conversation between Russian dissident Vladimir Kara-Murza — whom Putin tried to kill, twice — and former Ukrainian president Petro Poroshenko.

Poroshenko outlined three things that the West needs to do immediately: Signal support for Ukraine’s membership in NATO, provide defensive weaponry to the Ukrainian military, and sanctions. “If you attack Ukraine — this, this, this and this will happen in your energy sector, in your financial sector, in your security sector,” Poroshenko explained.

Canada has been mum in recent weeks on Kyiv’s possible NATO membership, to the chagrin of Ukrainian officials. The Department of Defence, meanwhile, confirmed to me that Canada hasn’t shipped lethal aid to Ukraine since 2015, when the Liberals took power.

Trudeau’s office, of course, bristles at the notion that their posture is meek. His office points to strong language in a recent read-out of a call with President Zelensky: “Prime Minister Trudeau expressed the imperative for Russia to de-escalate the situation, and reaffirmed Canada’s steadfast support for the sovereignty and territorial integrity of Ukraine,” it reads. “He emphasized the coordination underway between Ukraine’s partners in order to stand united in the face of Russian provocation.”

It’s certainly tough talk, and a clear symbol of Ottawa’s backing of the president. It is not, however, any kind of commitment. The only hint at Canada’s future engagement came in reference to Canada’s deployment in Lviv: “The two leaders discussed the future of Canadian support,” it reads. No one in government would confirm what that means.

Canada’s continued deployment in Lviv is certainly significant — 120 trainers from the Canadian Armed Forces and 80 support staff. Daniel Le Bouthillier, head of media relations for National Defence, wrote in a statement that the Russian military build-up “is not impacting the mission nor the Canadian Armed Forces members currently deployed in Ukraine, and that no change in posture has been made in Op UNIFIER.” (The mission has not been without problems: While Ottawa’s support was initially limited to the Ukrainian Armed Forces, it was expanded to include the more nebulous “Security Forces of Ukraine,” which may include members of far-right militias.)

The military confirmed that “the Canadian Armed Forces has noticed an increase in misinformation and disinformation as it relates to the Canadian Armed Forces missions in Latvia and Ukraine.” While it is not exceptional for the mission to date, Le Bouthillier wrote that the majority of that “state-sponsored cyber threat activity and information confrontation attributed to Russia has targeted the US, Ukraine, and other European countries.”

Figuring out how to counter and short-circuit that hybrid warfare campaign could be a useful role for Canada to play, but that does not seem to be on the agenda either.

There is undoubtedly a particularly Canadian modesty at play here: We’re just one little country? How could we avert war in eastern Europe?

Certainly, there may be some truth to it — but it is a self-defeating notion. If we truly believe we, both a member of NATO and the G7, are as meek and powerless as that idea would suggest, let’s just close our embassies and convert the Lester B. Pearson building into a hotel.

Sending American and Canadian troops to fight in Ukraine is almost unimaginable. So, if we’re not prepared to engage militarily, we had better double-down on a diversity of other tactics. To do that, all of NATO will need to get involved — both operating independently and together — that we make clear the consequences of breaking the international order to steamroll a democratically-elected government in Europe. America, hamstrung by domestic politics, cannot do this alone. We need to help America up the ante.

There is certainly a school of thought that says Moscow’s brazen incursion into Ukraine in 2014 — its annexation of Crimea, and its shadow war in the Donbass region — came as a direct result of weakened leadership from Washington. Some have gone so far as to suggest that then-President Barack Obama’s failure to enforce a ‘red line’ over chemical weapons in Syria emboldened Putin to act. (It’s a notion that Obama rejected out of hand, noting that Putin invaded Georgia in an era of intense American overseas expeditions in the Middle East.)

To try and get at the heart of why Putin invaded Ukraine in 2014, Atlantic journalist Julia Ioffe did something bold: She asked a bunch of Russians.

What came from her conversations was not a sense that Putin was analyzing Obama’s psyche for how his administration would react — a kind of reverse Kremlinology — but rather that Putin viewed the incursion as a purely Russian affair. Ukraine had been governed by a staunch ally of Moscow, and rabble rousers had ousted him in favour of a European stooge: So Moscow acted.

But that doesn’t mean they didn’t factor in how the West would react. Igor Korotchenko, who edits a Russian military magazine and serves as a reserve colonel, explained to Ioffe that  “We didn’t know how America would react, and we examined all scenarios … including American military intervention.”

Evidently, Putin calculated the benefits — a nationalist cause to rally around, massive oil deposits in Crimea, access to the Black Sea, and mineral deposits near Donetsk — outweighed the consequences. Given that the World Bank estimates that the Russian economy grew from 2015 to 2018, perhaps his calculus was right.

The Putin regime is counting on the fact that we consider the cost too high, or the drawbacks too great, to support a democratic, liberal state that wants to be free to make its own decisions — to join NATO, or not; to elect a reformer, or another kleptocrat; to modernize its society, or to fully become a vassal of neo-Soviet empire.

It should be a core tenet of Canadian foreign policy that we should leave people to make those decisions for themselves, whether that’s Ukraine, Haiti, or elsewhere. And we should make it clear that those decisions cannot be made at the barrel of a tank. To elucidate those consequences afterwards is too late. The cost to dissuade aggression rises exponentially once the tanks roll across the border — it’s likely a price we’re not willing to pay.

So it’s crucial that we outline the terms now. It’s imperative that we point to all the oligarch assets that will be seized and liquidated if they allow their client, Vladimir Putin, to continue his nationalistic war of aggression. We must point to all of the oil and gas projects that will be torpedoed. We should target cyber infrastructure being used to launch this hybrid war. All of the weight we are prepared to put behind Ukraine’s ascension to NATO.

If this government wants to back up the arrogance it showed when Trudeau proclaimed “Canada is back” six years ago, it should start by defending a friend against a foe.