Will Canada's only NDP government survive 2020?

John Horgan is Canada’s sole NDP premier, thanks to a power-sharing agreement with the Greens. More than two years in, Canada’s last NDP government seems stable. 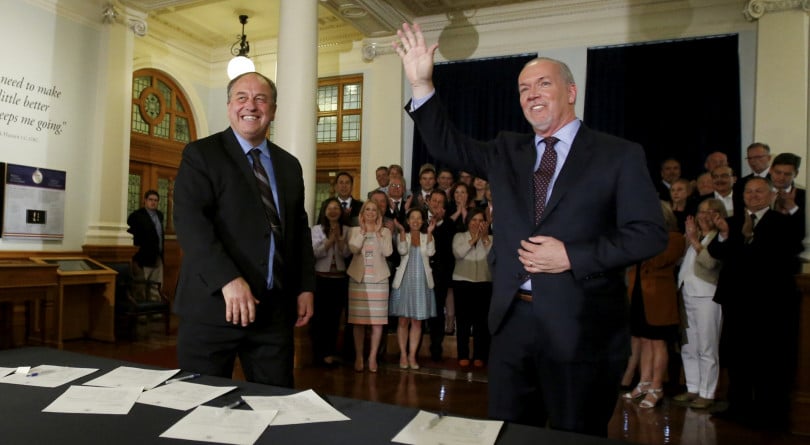 It’s only 9 a.m. on a cool fall morning and B.C. Premier John Horgan needs some air. He started his day early in a suit at a breakfast in a room that was too warm. He opens the door to a deck off the Vancouver cabinet ofﬁces that overlook the North Shore mountains and reflects on the question of whether he will survive his term as B.C. premier. “Nobody knows the answer to those existential questions,” says the leader of the province’s NDP. “We’re going to work as hard as we can to keep on the same road that we’re on, and it’s one that British Columbians seem pretty happy with. As long as we keep doing what people want, we’re going to be successful.”

After B.C.’s 2017 squeaker election, many people believed the NDP minority government, formed through a power-sharing agreement with the Green party, was destined to fail. The government had only a one-seat advantage; all it would take was one MLA to miss a vote, die or flame out in a scandal and the government would crash. The gap widened by a seat a few months after the election—when Liberal MLA Darryl Plecas accepted the Speaker’s job and was turfed by the Liberal party—but it was still ever so close. And then there were the two leaders: the NDP Premier John Horgan and the Green party’s Andrew Weaver. Both are outspoken—even pugnacious at times—and there were many who thought the two men who had battled it out on the campaign trail would be unable to ﬁnd enough common ground to keep the partnership alive.

Now, more than two years in, Canada’s last NDP government is still standing and, barring some unforeseen circumstance, looks capable of surviving the next year and beyond. “I think the government is looking stronger today than it did two years ago when it took over,” says Hamish Telford, a political science professor at University of the Fraser Valley. “I think it will survive the year quite easily.”

Whether Telford’s prediction proves accurate hinges on two main factors. The ﬁrst is the continued health of the relationship between the NDP and Greens, especially in light of Weaver’s announcement that he will resign as party leader in 2020. And the second is the NDP’s ability to keep all its elected members in the legislature.

On the question of the power sharing agreement,* both parties have good reason to want to maintain it. Often midway through a term, a government will start to position itself for the next election, says Max Cameron, acting director of the School of Public Policy and Global Affairs at the University of British Columbia. “They begin to want to differentiate themselves.” But doing that could present problems for the NDP, especially if it veers too far off a policy agenda amenable to the Greens, Cameron says. With so much at stake, he thinks the NDP is more likely to stay the course. “Horgan likes to be the premier, and he can continue as long as that relationship exists.”

Similarly, there are good reasons for the Greens to keep the partnership intact. With Weaver stepping down as leader (he will stay on as an MLA until the end of his term), it’s hard to imagine how it could be in the Greens’ interests to blow up the government before a new leader is chosen. Even once a successor is in place, pulling out of the deal could make the Green party appear untrustworthy, Telford says. “They committed to supporting the government and the conﬁdence and supply agreement [the formal power-sharing agreement between the parties] for four years.” Their reputation depends on honouring that promise, Telford adds.

Still, few people predicted the partnership between the parties would be as successful as it has been, in part because no one expected the two leaders to become friends. “If you had asked either one of us three years ago if we would be civil to each other, much less wish each other well and have warm feelings toward each other, it would have been impossible,” Horgan says. The two men are both from Victoria, are close in age and went to rival high schools. They have much in common, but politically have always been adversaries. “We were ﬁshing in the same pool in the Lower Island for votes,” Horgan says.

But working in a minority government forces everyone to dial back the volume and consider other points of view. “One of the failings of the left is that we preach too much rather than listen,” says Horgan. “Having a minority situation means we have to be more thoughtful about what we do, and inevitably you get a better outcome.”

Weaver agrees and says his early impressions of Horgan were wrong. “Now when I see John Horgan, I see someone I genuinely like—a very honest, ethical person, with integrity.” Something between the two has jelled, and these days Weaver sounds every bit as committed to Horgan’s government as to the premier himself: “The number one priority for me now is the stability of this government. I think it’s doing well.”

Some currents in the Green party may not share Weaver’s belief that the alliance has sufﬁciently furthered the party’s agenda. The Greens were unable to block the Site C dam on the Peace River, or the $40-billion LNG Canada liqueﬁed natural gas project in Kitimat. “Their decision to sign onto a four-year agreement took away all of their leverage,” Telford says. And working together, the Greens and NDP lost a referendum on proportional representation, a crushing blow for the Greens whose popular-vote share is much higher than is reflected by their current three seats in the legislature, the most they’ve ever been able to win. Nor has the NDP-Green alliance so far been able to stop the Trans Mountain pipeline expansion now being championed by the Trudeau government.

Still, Weaver—perhaps looking to his legacy—insists the Greens have beneﬁted greatly from the power-sharing relationship. He points out that the ﬁrst three private members’ bills ever passed in B.C. were his; one of them paves the way for companies seeking to prioritize social and environmental goals to become legally registered as “beneﬁt companies.” The Climate Change Accountability Act—introduced by the NDP—is basically a Green bill, Weaver says. Last year, the B.C. government announced it would seek to cut carbon emissions by 40 per cent from 2007 levels by 2030. The new act establishes an independent oversight body to monitor carbon-emission reductions and mandates annual progress reports. Horgan says the legislation is a prime example of what two parties committed to “give and take” can accomplish by working together: “Our climate plan is the envy of activists across the country, if not the continent.”

Naturally, it hasn’t been all roses. In late 2017, when the relationship between the two leaders was still uncertain, the NDP overruled Green objections and decided to continue the construction of the Site C dam, a mega-project started by the former Liberal government. “That was the only time we had a heated discussion,” Horgan says. Site C was controversial, even within the NDP, and the decision to go ahead was wrenching, Horgan says. “I had family members, [including] my spouse, who felt we should have gone in a different direction.” Ultimately, the NDP decided flushing the initial $4-billion investment was untenable and they pushed the project through. The Greens were disappointed but held to their agreement with the NDP, and the government survived.

Horgan’s cabinet has remained largely intact as well. The only hitch so far has been a police investigation into former citizens’ services minister Jinny Sims, MLA for Surrey-Panorama. Details have not been disclosed, but Sims was previously grilled in the legislature over allegations that she wrote reference letters for foreign nationals who are on a security watch list. Sims has resigned from cabinet while a special prosecutor considers the evidence. Horgan professes to be unworried, but Surrey-Panorama is a swing riding and would not be a sure NDP win in a by-election. Horgan downplays the risk, pointing out that two Liberal cabinet ministers in recent governments faced investigations that did not result in charges. Neither Horgan nor Sims herself are privy to the allegations, says Horgan, which is frustrating, particularly for Sims. “I can’t prejudge what’s going on there, but Jinny is still in caucus and she’s still working hard.”

Horgan handles questions easily and resists efforts by his advisers to stay on script. “I’m a nightmare for messaging from the people who try to help me with my communication skills,” he says. In part, this plainspokenness reflects Horgan’s personality. But it’s also a sign of a government that is feeling conﬁdent, Telford says. Early in 2019, Horgan’s personal popularity rate with B.C. voters was holding ﬁrm at 52 per cent, two polls suggested. Says Telford: “Horgan is exceeding my expectations. He looks very comfortable in the job.”

This has surprised those who thought Horgan’s combative style in opposition might hinder his ability to compromise in leadership. Horgan insists he hasn’t changed; his role has changed. “Before I was paid by the Queen every fortnight to yell at the government, so I yelled at the government.” To govern on behalf of all British Columbians in a minority situation requires a far less ideological approach. “I’m prepared to compromise all day long,” Horgan says.

This article appears in print in the January 2020 issue of Maclean’s magazine with the headline, “How to hang on by a seat.” Order a copy of the Year Ahead special issue here. Subscribe to the monthly print magazine here.

CORRECTION, Dec. 20, 2019: An earlier version of this post incorrectly stated that B.C.’s NDP government is in a coalition with the Greens. In fact, the two parties have a power-sharing agreement.