Will Doug Ford finally get the better of Toronto city council?

Toronto voted to challenge the premier's plan to slash the size of council. But with no clear path to win, it's likely to be an exercise in futility. 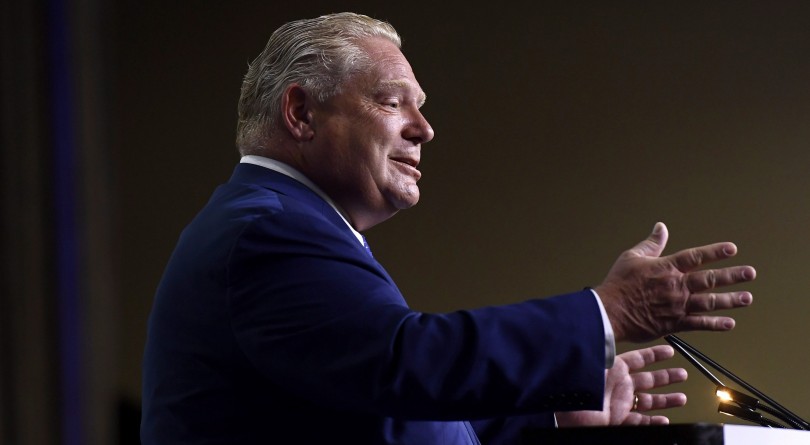 Doug Ford speaks on Monday in Ottawa to the Association of Municipalities of Ontario. THE CANADIAN PRESS/Justin Tang

They’re dealing with a “tin pot dictator,” according to city councillor Josh Matlow, referring to Ontario Premier Doug Ford and his government’s legislation that will essentially cut the number of Toronto city councillors in half after the upcoming municipal election.

They have a current mayor who doesn’t stand up for Toronto, according to mayoral candidate Jennifer Keesmaat, “and Doug Ford knew he could walk all over John Tory” with these election changes.

Meanwhile, city council’s chamber is full of plates with an assortment of cheese, thanks to Councillor Giorgio Mammoliti—a known Ford supporter—which he said would pair well with all the “whiners” on council.

Toronto city council’s special meeting on Monday then concluded with a vote in favour of legally challenging the new provincial legislation, Bill 5, which would cut the size of Toronto’s city council from 47 members down to 25; exhaust all legal avenues in that pursuit; and postpone the upcoming Toronto election if necessary.

In doing so, Toronto city council has turned what, legally speaking, seems a foregone conclusion into a full-blown crisis.

Toronto city councillors have long stood up to Doug Ford, a former city councillor himself and failed mayoral candidate. They appear to have no intention of letting up now for a Premier Ford.

Ford spent his morning in Ottawa speaking to the Association of Municipalities of Ontario, where he assured those in attendance that his government has no plans to shrink the size of their municipal governments in the “near future.” He did, however, lament the fact that Toronto is not a member of the Association of Municipalities of Ontario, and spoke about knowing first-hand about Toronto city council inefficiencies from time as a councillor.

Toronto city councillors, meanwhile, spent the full day discussing legal advice, the implications of a court challenge of Bill 5, and the repercussions of the contested council cuts. To put the new ward boundaries into perspective—a change that would align them with the same boundaries as those for provincial elections—if Guelph, Ont., had been subject to the same representation as Toronto, Councillor Mike Layton pointed out, Guelph would have a single city councillor representing a city of 130,000 people. Then couple Toronto’s diminished municipal representation in government with the changes occurring halfway through an election campaign—and with little warning from the Ontario government and a Progressive Conservative party in power that didn’t campaign on this issue.

But the legal challenge comes with its own major hurdles, the most obvious one being the odds against its success. City council’s legal team informed them there is no “obvious path” to challenging this legislation, according to a confidential document obtained by CBC. Under the Canadian constitution, provinces have the power to make laws governing municipalities.

RELATED: Is it time to abolish provinces?

Perhaps it’s no wonder many councillors spent their morning re-submitting their nomination papers under the latest ward guidelines—realizing any court challenge is likely to be a costly exercise in futility. Some conceded they simply won’t be seeking re-election this fall. Meanwhile, councillor Joe Cressy told media he won’t submit his paperwork to run in a 25-ward election campaign until all legal avenues to combat it are finished to fight it.

The city’s legal challenge is obviously a long shot, though what other options were on the table besides simply abiding by the Ontario government’s legislation? At one point, in what would have to be viewed as a major act of defiance to provincial governments—if implemented—Cressy asked if it’s even possible that Toronto go forward with a 47-ward election, effectively ignoring the new rules of Queen’s Park. The answer, to put it bluntly, was “no.”

MORE ABOUT DOUG FORD AND TORONTO: