Is Doug Ford's victory a 'lifeline to Wynne's Liberals'?

The plain-talking, folksy new PC leader will appeal to growing populist leanings, but he may also struggle to win over key urban Ontario voters 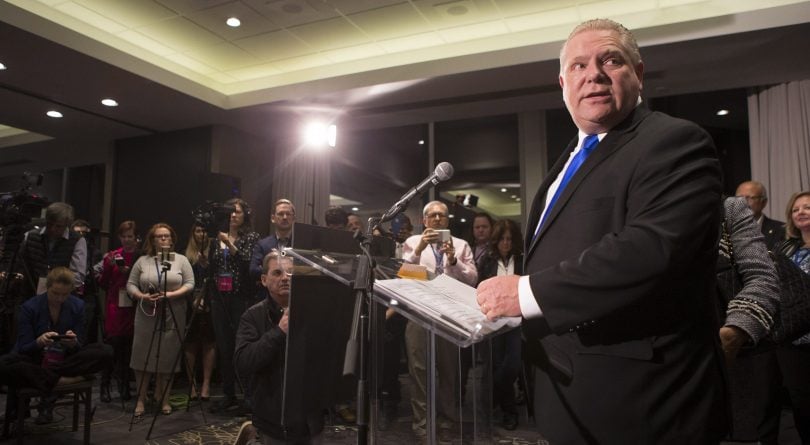 Doug Ford stands at the podium after being named as the newly elected leader of the Ontario Progressive Conservatives at the delayed Ontario PC Leadership announcement in Markham, Ont., on Saturday, March 10, 2018. THE CANADIAN PRESS/Chris Young

A crane inside the cleared out Hilton Conference Centre in Markham, Ont., retrieved a massive net of balloons meant to be dropped on the new Ontario Progressive Conservative leader five hours earlier. Hundreds of party members had left by then, sent home by organizer Hartley Lefton following confirmation that one candidate was contesting the vote results.

The crowd had been growing anxious and thinning for hours, milling around and trying to corroborate bits of gossip they’d picked up. “Someone said Ford won by a hair,” a volunteer said. “I heard Caroline Mulroney came fourth,” he added. “They’re recounting votes by hand. We’re gonna be here a while,” someone speculated. “This is such a s–t show,” another woman proclaimed.

By 10 p.m. Saturday—seven hours after a scheduled announcement—businessman and former Toronto city councillor Doug Ford was officially named the new leader of Ontario’s Progressive Conservative Party, messily wrapping up the 45-day race. “Tonight was a clear sign there’s a lot more work ahead of us,” Ford noted in his low-key acceptance speech.

The run was bedlam from the start. It was triggered by sexual misconduct allegations against former party leader Patrick Brown (Brown denies any wrongdoing and says he’s determined to clear his name), only to have him join the contest to replace himself. He eventually dropped out for good, but not before revealing stark divisions and dysfunctional leadership within the party. In the final days of the race, three of the four candidates desperately, and unsuccessfully, appealed to extend voting as thousands of members struggled to cast their ballots online.

The drama continued well into the eleventh hour, during which time Christine Elliott—considered the frontrunner in the race—called for a recount, claiming “serious irregularities” in the vote, which Ford won on the third ballot, it was later revealed.

In a statement Sunday morning, Elliott claimed that “thousands of members were assigned to incorrect ridings…In a race this close, largely determined by geography, someone needs to stand up for these members,” she added, promising to “investigate the extent of this discrepancy.”

Underscoring the frenzied race and announcement was the intense reality that whomever the winner, he or she could well go on to lead Canada’s biggest province. “Look at the energy in this room,” keynote Jason Kenney said, kicking off the convention. “I can feel it, and I can tell ya, Kathleen Wynne’s Liberals can feel it, because I am looking at the next government of Ontario.”

An Angus Reid survey of 807 Ontarians conducted less than a week before the vote found that 50 per cent of decided voters would support the Conservatives on June 7, compared to 24 per cent support for the Liberals and 22 per cent for the NDP.

Throughout the contest, polls showed Elliott and Ford neck-and-neck. It was a toss-up whether Elliott, an establishment politician and the widow of former federal finance minister Jim Flaherty, would clinch the leadership over a populist outsider up until the results were finally announced.

Both had campaigned on scrapping a carbon tax plan and giving parents more say on what their kids learn in sex-ed, but the optics around the two candidates set them apart. Elliott—roughly centre-right on the political spectrum—doesn’t shy from caveats in her rhetoric, and she’s a Queen’s Park veteran, for better or worse. Ford, meanwhile, speaks in simple, grabby terms, and refuses to call himself a politician.

“Doug is one of these people that engages you,” Ford supporter Annette Hutcheon said at the convention. “He makes you feel like you’re a part of something. So even though you may just be one person or one vote, in the eyes of the Fords, you’re huge. That’s a very special feeling,” she continued, adding that “Doug isn’t perfect, but he’s real.”

On the surface, Ford’s victory over Elliott is eerily reminiscent of the last U.S. presidential election. There are deeper similarities, too, in what it says about growing populist leanings among voters in Canada. But pundits are torn on whether his leadership will help or harm the party come election time.

“If you’re the Liberals watching this race, the candidate you’d most like to see win is probably Doug Ford,” Jeff Bangs, a political strategist and PC member, told Maclean’s in an interview days before the vote. “I’m in the camp that says the June 7 election is no one’s, at this point. The polls show the Conservatives in a slight lead, but that’s because the Liberals are in such bad shape,” Bangs added. “If Ford wins, it’s a lifeline to Kathleen Wynne and the Liberals.”

The addition of 17 new ridings in the general election this spring—raising the seat count to 124—could be another saving grace for the Liberals. Most new seats are in urban areas, which tend to vote Liberal. Had Elliott won, it’s possible she could have swayed some urban and suburban voters, in new ridings and elsewhere, to the Conservative camp. Ford is unlikely to have the same effect on Liberal voters.

Indeed, his victory is in part thanks to supporters of Tanya Granic Allen—considered the fourth favourite candidate, and one with far-right, social conservative leanings. Speaking with a half dozen Granic Allen supporters at the convention on Saturday, all of them told Maclean’s they ranked Ford second on their ballots. “I’d be happy if Doug gets it,” one Granic Allen voter said. “Bring it on.”

However, her supporters—a group that would presumably back Ford—are likely a small segment of voters outside the conservative membership. “When you start to get into discussions of social conservative issues, we know full well from the past couple decades that there is no path to victory at the polls,” says Bangs. “It may get you the leadership of the party, but where you go after that? It’s not going to win you the election.”

The fractured party’s biggest challenge in the weeks ahead will be creating some semblance of solidarity. Certainly, becoming the next government depends on it. “Kathleen Wynne is at home watching this hoping for one outcome this afternoon: disunity,” Kenney said early Saturday afternoon, as if cautioning members about the yet-to-be determined outcome. Already, they’ve failed to heed his advice.