Will Jagmeet Singh's child-care platform work as well for him as impending fatherhood?

Election Image of the Day: The sight of the NDP leader shopping for baby clothes is enough to warm any voter's heart. The same cannot be said for $10-a-day day care. 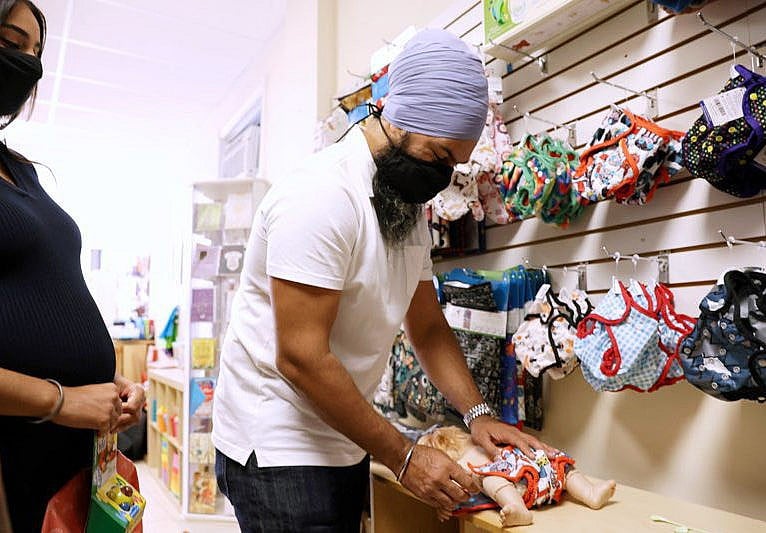 Gurkiran Kaur and Jagmeet Singh shop for baby clothes ahead of the national leaders debate. (@theJagmeetSingh/Twitter)

It’s extremely hard to time a pregnancy to exactly when you want it. But for NDP Leader Jagmeet Singh, events couldn’t have aligned much better. He and his wife revealed they were expecting mere days before the election was called, no doubt helping Singh’s personal favourability ratings—who doesn’t share the joy of parents-to-be?—in a race where his party is struggling to stand apart from the Liberals. Child care, which is surely an issue now close to Singh’s heart, is a prime example: there’s barely a sliver of daylight between the NDP and Liberal proposals for a $10-a-day child-care program. Conservative rival Erin O’Toole, meanwhile, would instead create a tax credit, much to the chagrin of provinces that have already signed deals with the Liberal government. That includes Quebec, whose premier isn’t exactly pleased with O’Toole’s decision, nothwithstanding the fact the province already has $10-a-day child care. And yet, as Singh goes baby clothes shopping on the campaign trail, the issue may not be resonating too well with the general public, who view all three parties’ plans very similarly, and don’t consider child care a bigger issue that climate change, pandemic management, economic growth or affordability. Singh likes to pitch for change, but the only changes he might be making this winter are dirty diapers.