Will the crisis in Kabul move votes in Canada?

Election Image of the Day: The desperate effort to get people out of Afghanistan is front of mind in Ottawa. You wouldn't know it from watching the campaign. 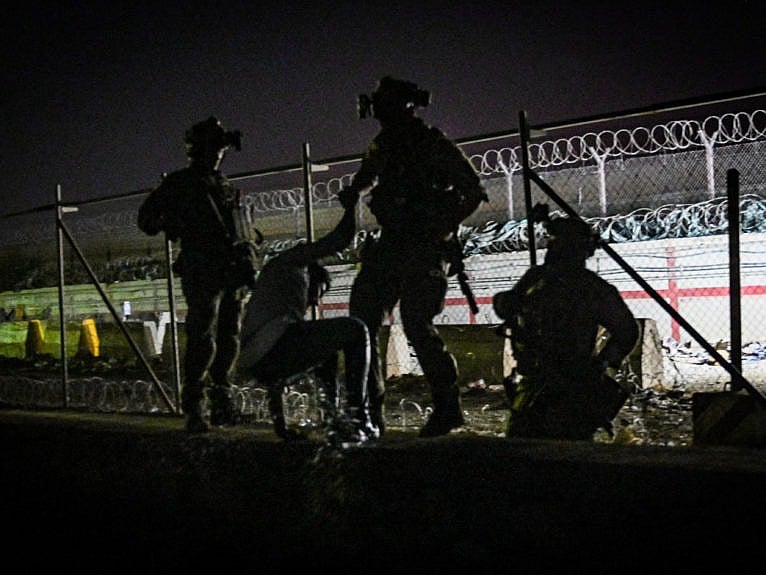 British and Canadian soldiers help an Afghan climb the wall of a canal, as he and others wait near the foreign military-controlled part of the airport in Kabul, hoping to flee the country. (Wakil Kohsar/AFP/Getty Images)

Usually, this daily feature offers snapshots from the campaign trail. Today, it won’t. That’s because another story—very much an election issue—has been progressing alongside the campaign from Day 1: on the same day Justin Trudeau called this vote, his government shuttered the Canadian embassy in Afghanistan and the Taliban declared control over the nation’s capital. Afghanistan has since been shunted aside on Canadian doorsteps and in virtual town halls, squeezed out by health care and housing and COVID and whatever else this election turns out to be about. Yet Canada’s military has, for days now, been slowly—arguably too slowly—evacuating Canadians and Afghans. Yesterday, more than 500 were extracted in Canada’s largest flight yet from Kabul’s chaotic airport. Earlier, Trudeau promised to resettle 20,000 Afghan refugees in Canada. But it’s unclear how he plans to make that happen, now that President Joe Biden has confirmed to his fellow G7 leaders that the U.S. will leave the central Asian nation on Aug. 31, full stop. That’s bad news for Canada and Europe, who’ve been relying on the U.S. to help with the mass exodus. Trudeau, for his part, seemed prepared for it. In a badly needed show of integrity on a foreign-policy file, he declared Canada would stay beyond that deadline, if necessary, to evacuate as many people as possible. Whether his government is able to make significant headway into that 20,000 numbers—or whether voters will even notice—remains anyone’s guess. Elections tend to swing on matters of life and death only when the deaths are happening closer to home.