115 dead and others trapped after train derailment in India

Rescuers are using torches and cranes to get at those trapped in the wreckage. 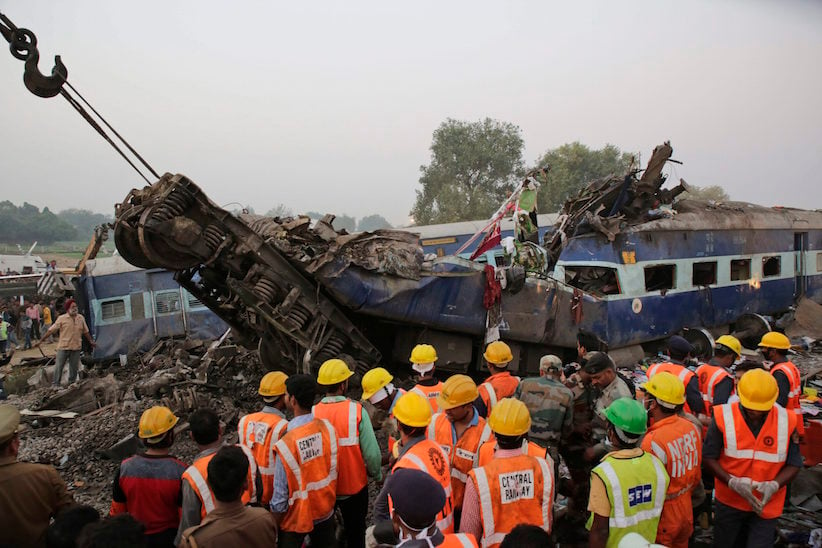 The death toll was expected to rise further because rescue workers had yet to gain access to one of the worst-damaged of the 14 coaches that derailed, said Daljeet Chaudhary, a director general of police. About 150 people were injured, he said.

The train derailed at around 3:10 a.m., jolting awake passengers who had settled in for the long trip. Survivors and bodies were retrieved from mangled coaches that had fallen on their side.

Ramchandra Tewari, a passenger who suffered a head injury, said he was asleep when he was suddenly flung to the floor of his coach.

“There was a loud sound like an earthquake. I fell from my berth and a lot of luggage fell over me,” Tewari told reporters from his hospital bed in the city of Kanpur. “I thought I was dead, and then I passed out.”

Another passenger, Satish Kumar, said the train was travelling at normal speed when it stopped suddenly.

“It restarted, and then we heard a crash,” Kumar, whose coach remained standing on the track, said at the derailment site. “When we came out of the train, we saw a few coaches had derailed.”

The cause of the derailment was not immediately clear. Accidents are relatively common on India’s sprawling rail network, which is the world’s third largest but lacks modern signalling and communication systems. Most accidents are blamed on poor maintenance and human error.

The impact of the derailment was so strong that one of the coaches landed on top of another, crushing the one below, said Brig. Anurag Chibber, who was heading the army’s rescue team.

“We fear there could be many more dead in the lower coach,” he said, adding that it was unclear how many people were in the coach.

Javeed Ahmad, the police chief of Uttar Pradesh state, where the derailment took place, said 115 bodies had been recovered from the wreckage.

The derailment occurred near the village of Pukhrayan, outside of Kanpur, an industrial city about 400 kilometres (250 miles) southeast of New Delhi. The Patna-Indore Express train, linking the central Indian city of Indore to the city of Patna to its northeast, completes its 1,360-kilometre (845-mile) journey in 27 hours.

Rescue workers, soldiers and members of India’s disaster management force reached Pukhrayan within an hour of the derailment and began pulling out people trapped in the overturned coaches.

Rescuers used cutting torches to open the derailed train cars to try to reach those trapped inside, while cranes were deployed to lift the coaches from the tracks. However, rescuers moved cautiously because some of the coaches were precariously tilted, and there was a danger that they could topple over, possibly injuring those trapped inside.

“We are being very careful in using the cutting torches,” Chaudhary said.

Medical teams provided first aid near the site, while the more seriously injured were moved to hospitals in Kanpur, Chaudhary said. Of the roughly 150 injured, 72 were in serious condition, he said.

Railway Minister Suresh Prabhu arrived at the site by Sunday evening to monitor the rescue and relief operations. He said a special train has been arranged to take passengers from the derailed train to Patna, according to the PTI news agency. He said thousands of food packets, water bottles and cups of tea were being provided to the stranded passengers.

Anxious relatives of passengers searched for their family members among the injured and the dead at hospitals in Kanpur.

Prime Minister Narendra Modi expressed his concern over the derailment.

“Anguished beyond words on the loss of lives due to the derailing of the Patna-Indore express. My thoughts are with the bereaved families,” Modi posted on his Twitter account.

Kanpur is a major railway junction, and hundreds of trains pass through the city every day. After the derailment, several trains using the line were diverted to other routes, Anil Saxena, spokesman for Indian Railways, said in New Delhi.

Rail authorities have ordered an investigation into the incident, Saxena said.

In 2012, an Indian government report said about 15,000 people are killed every year in train accidents in the country, caused mainly by outdated equipment and overstretched staff.

The country’s worst railway accident occurred in 1981, when a passenger train fell into the Baghmati River in northern India, killing nearly 800 people.

Prime Minister Modi has pledged to invest $137 billion over the next five years to modernize India’s railway network, which is used by around 23 million passengers a day.