Singer joked about fire before realizing the danger, survivors say 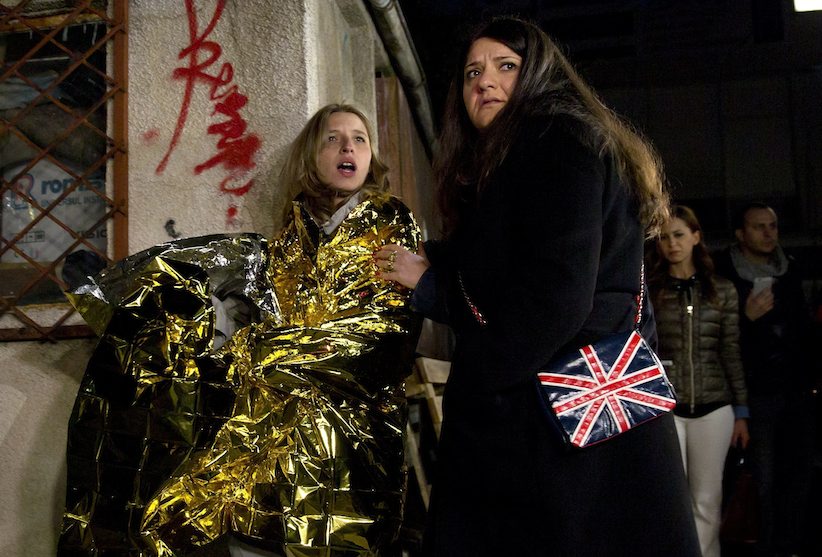 A survivor of a fire that occurred in a club in Bucharest, is led away from the scene wrapped in a thermal blanket early Saturday, Oct. 31, 2015. A heavy metal band’s pyrotechnical show sparked a deadly fire Friday at a Bucharest nightclub, killing more than 20 people and injuring scores of the club’s mostly youthful patrons, officials and witnesses said. (AP Photo/Vadim Ghirda)

Update, Nov. 1: Two more people died Sunday of burns from a nightclub fire in Bucharest, a Romanian official said, raising the death toll in the horrific blaze to 29. Forensic experts, meanwhile, began the first autopsies of victims on Sunday. On Saturday, the government decreed three days of mourning.

BUCHAREST, Romania — Survivors of a deadly nightclub fire and stampede in Romania say the lead singer of the heavy metal band on stage made a joke at first about the fire before it engulfed the basement club in downtown Bucharest.

Hundreds of young people had gone clubbing at the hip Colectiv nightclub Friday night to enjoy a free concert by the Goodbye to Gravity metal band. The evening ended in horror, as the inferno caused a panic that killed 27 people and injured 180 others.

Around 146 people remained hospitalized Saturday, some in critical condition suffering from burns and smoke inhalation. Officials expect the death toll to rise in what is the worst disaster of its kind ever in Romania.

Premier Victor Ponta cut short a visit to Mexico to return to Bucharest and declared three days of mourning for the victims starting immediately.

Raed Arafat, an emergency situations official, said 17 of those who died still have not been identified. TV stations posted a number for families to call to find out about the tragedy.

An Italian woman, two Spanish citizens and a German man were among the injured, the Romanian Intelligence Agency said.

Witnesses told Antena 3 TV that between 300 and 400 mostly young people had been at the club, housed in a former factory, when a pyrotechnical show went awry. They said there was only one exit.

Club-goers told Digi 24 television that a spark on stage ignited some polystyrene decor. Photos posted on social media appeared to show a flame emanating from a pillar covered in foam insulation as those in the audience applauded the band.

Delia Tugui, a Spanish teacher at the American International School of Bucharest who was at the concert with her husband and son, said club-goers were surprised by how fast the fire spread and panicked.

“The lead singer made a quick joke: ‘This wasn’t part of the program.’ The next second, he realized it wasn’t a joke and asked for a fire extinguisher,” she wrote on her Facebook page. “In 30 seconds…the fire spread all over the ceiling. People rushed to the entrance but it was too narrow, and people panicked. Behind me people stampeded, climbing over each other, to try and get out.”

“Friends were looking for each other under the pile of people. Asking ‘Is it you? Where are you? I can’t see you. Is that your arm?’ It was a nightmare.”

She said she knew some would not escape.

“I realized that those on the other side of the bar would not get out alive.”

“I was two meters (6.6-feet) from the door and I barely got out,” she told The Associated Press. “People started pushing each other, stamping on each other, it was incredibly quick.”

Once she got outside there was blast and her hair caught fire, Tugui said.

“I tried to put it out with my hands and got burned. People behind me were burned from head to toe,” she said. “Other people were hairless, their clothes were half-burned, and skin burned.”

Lead singer Alex Pascu was hospitalized in the Floreasca emergency hospital and Antena 3 TV said bass guitarist Alex Telea was reported missing by his parents who have been searching for him.

Florentina Dinca, 38, who lives opposite the nightclub, told The Associated Press there was chaos as emergency workers tried to aid the badly burned club-goers.

“They were very frightened, they screamed, ambulances didn’t know what to do,” she said. “Girls had their hair burned, they had burns on their faces. It was terror.”

Bogdan Oprita, spokesman for the Floreasca Emergency Hospital where dozens were hospitalized, said it was the worst bloodshed since the 1989 anti-Communist revolution.

“It was like a war. Dozens of surgeons were called from home and asked to operate,” he said.

President Klaus Iohannis visited injured people Saturday at the Floreasca hospital in Bucharest and tried to comfort survivors and relatives. He said most of the injured were unconscious and in serious condition. He later visited the nightclub and spent a few moments paying silent respect to the victims.

He also promised an inquiry into the blaze to prevent future disasters.

“I visited burns patients from last night’s tragedy,” he said. “I spoke to a patient’s mum. People are disgusted that such a thing could happen and I hope we manage to have results of the inquiry as soon as possible and to change norms so that things like this never happen again.”

Prosecutors said they are investigating possible manslaughter charges. Police spent all night in the club investigating the incident and questioning the club’s owners.