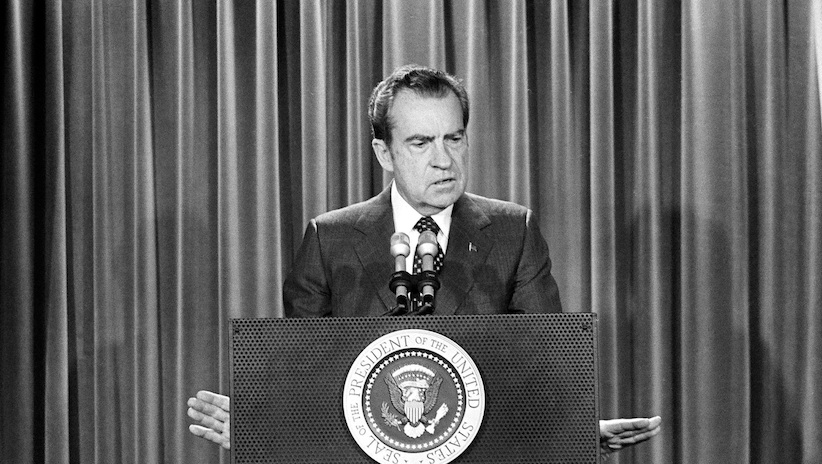 YORBA LINDA, Calif. — Almost a decade after Richard Nixon resigned, the disgraced former president sat down with his one-time aide and told the tale of his fall from grace in his own words.

For three decades, that version of one of the nation’s largest and most-dissected political scandals largely gathered dust — until this week.

Starting Tuesday, to commemorate the 40th anniversary of Nixon’s resignation, portions of the tapes will be published each day by the Nixon Presidential Library & Museum and the private Richard Nixon Foundation. The postings begin with Nixon recalling the day he decided to resign and end Saturday — his last day in office — with the 37th president discussing his final day at the White House, when he signed the resignation agreement, gave a short speech and boarded a helicopter for San Clemente, California.

The segments were culled from more than 30 hours of interviews that Nixon did with former aide Frank Gannon in 1983. The sections on Watergate aired publicly once, on CBS News, before gathering dust at the University of Georgia for more than 30 years.

“This is as close to what anybody is going to experience sitting down and having a beer with Nixon, sitting down with him in his living room,” said Gannon, now a writer and historian in Washington, D.C. “Like him or not, whether you think that his resignation was a tragedy for the nation or that he got out of town one step ahead of the sheriff, he was a human being,” he said.

Nixon, who died in 1994, had hoped that providing his own narrative would help temper America’s final judgment of him.

Perhaps with that in mind, he didn’t shy away from the tough questions, commenting on everything from the threat of impeachment to the so-called “smoking gun” conversation that included evidence he participated in a Watergate coverup.

“This was the final blow, the final nail in the coffin. Although you don’t need another nail if you’re already in the coffin — which we were,” Nixon said in a segment about the June 23, 1972 tape.

Nixon said when he decided to resign, he faced such strong resistance from his wife that he brought a transcript of the “smoking gun” tape to a family meeting to show her how bad it was.

“I’m a fighter, I just didn’t want to quit. Also I thought it would be an admission of guilt, which of course it was,” he said. “And, also, I felt it would set a terribly bad precedent for the future.”

The tone of the tapes contrasts with the sometimes adversarial tone of the well-known series of Nixon interviews done in 1977 by British journalist David Frost. Nixon appears relaxed in the tapes. He smiles occasionally, speaks fondly about his two daughters and wife and seems emotional while recalling the final days of his fraught administration, as pressure mounted for his impeachment over a 1972 break-in at Democratic headquarters by burglars tied to the president’s re-election committee who were trying to get dirt on his political adversaries.

The decision to release these friendly interviews now, years after the fact, might not be a coincidence, said Luke Nichter, a Nixon expert and professor at Texas A&M University. With the passage of time, he said, every former president sees their legacy re-examined and recast, and Nixon may be no different.

“Watergate’s never going to go away,” Nichter said. “Nixon’s role in that and the coverup is so well-documented. But I think what we’re trying to say here, 40 years later, is Nixon doesn’t have to be all bad or all good. He can be a combination of the good, bad and ugly.”

Nixon denied knowing about plans for the break-in beforehand, but an 18 1/2 minute gap in a recording of a post-Watergate White House meeting led many to suspect a coverup.

Faced with impeachment and a possible criminal indictment, Nixon resigned on Aug. 9, 1974, and retreated to his native California. The following month he was granted a pardon by President Gerald Ford.

In the final segment to be released Saturday, Nixon recalls his last day at the White House.

After a fitful night, he awoke at 4 a.m. and went to the kitchen where he was surprised to find a kitchen staffer already there.

The staffer told Nixon it was 6 a.m., not two hours earlier — the president’s watch had stopped overnight.

“The battery had run out, wore out at 4 o’clock the last day I was in office,” Nixon said ruefully. “By that day, I was worn out too.”