Many questions as investigators sort out deadly gunbattle on Mexican ranch 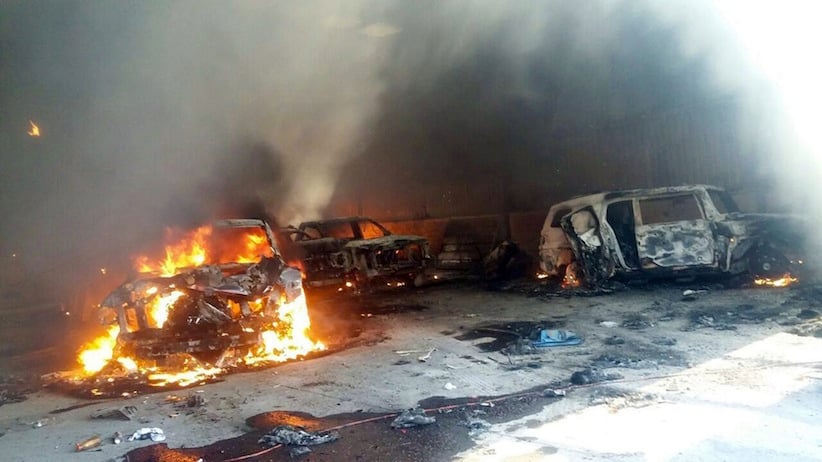 Vehicles burn, that authorities say caught fire during a gunbattle, in a warehouse at Rancho del Sol, near Ecuanduero, in western Mexico, Friday, May 22, 2015. At least 43 people died Friday in what authorities described as a fierce, three-hour gunbattle between federal forces and suspected drug gang gunmen at the ranch. (AP Photo/Oscar Pantoja Segundo)

ECUANDUREO, Mexico — The call for backup went out to local police after 8 a.m. There was a shootout underway at a ranch in the western reaches of Michoacan state and the federal authorities needed help.

One patrolman said he sped with his colleagues from a town 20 minutes away and arrived at the scene Friday to see bullets flying and military and police helicopters hovering overhead in what would become the deadliest confrontation with suspected cartel members in recent memory.

“It looked like a battlefield,” the officer said Saturday, insisting that on anonymity like everyone at the scene.

Investigators and human rights officials continued to work Saturday at the scene, where patrol cars of many agencies could be seen parked, and police guarded all entrances to the property, even dirt paths lead onto the 112-hectare (277-acre) property known as Rancho de Sol.

Photographs from the site showed the bodies of men without shirts and some without shoes strewn over the ranch, in an area near the Michoacan border with Jalisco state that is a stronghold of the Jalisco New Generation cartel, one of the most powerful and fastest-growing organized crime groups to surface in recent years.

The bodies, some appearing to lie with semi-automatic rifles, lay in fields, next to farm equipment and on a blood-stained patio strewn with clothes, mattresses and sleeping bags. Video of the battle obtained by The Associated Press showed federal police officers coming under fire.

While National Security Commissioner Monte Alejandro Rubido wouldn’t name the cartel, he said the responsible group has its base in Jalisco state.

Government officials said the shooting broke out early Friday as federal authorities responded to a complaint of armed men taking over the ranch.

Federal forces heading to the ranch met a truck carrying armed men who opened fire, and when government forces chased the gunmen onto the ranch, they came under heavy fire from others, Rubido said.

He said eight vehicles also were confiscated, six of them set ablaze by a fire inside a storehouse that created a black plume of smoke seen for miles.

Despite the accounts of shooting, the lack of federal casualties raised questions because of a similar case last June 30 in Mexico state, where the army said 22 alleged criminals died in a shootout with troops, while only one soldier was injured. An investigation by The Associated Press revealed that many of the suspects had been killed after they surrendered.

Security expert Alejandro Hope on Saturday called the government’s version of what happened at the ranch “weird.” There were more dead than weapons recovered, he noted, and he said in some of the photos it appeared the corpses had been moved.

“There are many, many still obscure pieces of information,” said Hope, who formerly worked for Mexico’s national intelligence agency.

The Mexican government is suffering a “serious credibility deficit” with its people and needs to get information out as quickly as possible, said Guillermo Trejo, political science professor who studies Mexico at the University of Notre Dame.

Since the army massacre, the public has doubted the government’s official versions of the disappearance of 43 college students last September and the killing of more than nine people in January in Michoacan, where witnesses said they came out of their cars shouting they were unarmed. The government said they were suspected criminals who were killed by friendly fire.

“Is this a massacre or battle, illegal executions or routine operations?” Trejo said of the bloodshed at the ranch. “We need to ask these questions because there is a short and long history of the government fabricating and staging the scenes of battles and crimes.”

The battle on Friday followed two other recent unprecedented attacks by the cartel, one that killed 15 state police officers and another that shot down an army helicopter with a rocket launcher for the first time in Mexico’s history.

A federal official on Saturday said the area around the ranch has been a Jalisco New Generation stronghold the last couple of years as the cartel expanded outside Jalisco and grew rapidly into one of Mexico’s most powerful organized crime groups. He spoke on condition of anonymity because he wasn’t authorized to speak to the press.

The scene is near the town of La Barca, where authorities in 2013 found more than five dozen bodies in mass graves linked to the Jalisco cartel. In 2014, gunmen killed the mayor of Tanhuato.