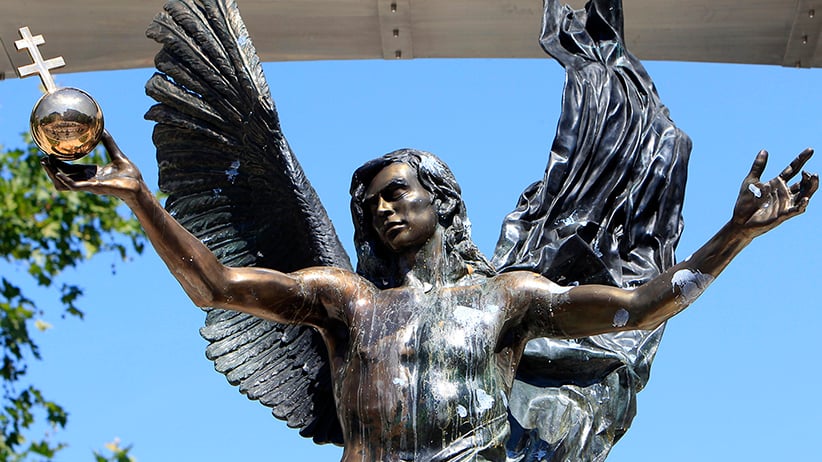 In Budapest’s Szabadság Square, over the entrance to an underground parking garage, is the recently revealed monument to the victims of Hungary’s German occupation. It is a series of quasi-Greek columns, some standing, others partly broken, surrounding a bronze statue of what looks somewhat like an angel on a pedestal. The languid male figure is said to represent the Archangel Gabriel in his spontaneous impersonation as beleaguered Hungary. A nasty-looking bronze eagle is leaning down from its stone perch toward Gabriel’s head.

Several scholars have pointed out that the symbolism is unfortunate, as the eagle is Germany’s national symbol and Germany is a Hungarian ally in NATO and the EU. But these may be the monument’s least noteworthy sins. More egregious is the falsification of history: During the Second World War, Hungary was an ally of Nazi Germany. It was the first modern European state to introduce anti-Jewish laws. Three years before German troops arrived, it had deported 17,000 of its people to Kamenets-Podolskii to be killed. The German invasion in 1944 served as an excuse for officials to confiscate the valuables of its Jewish population and ship the citizens to Auschwitz, where most were murdered. Historian Kristian Ungvary called the monument “a living horror” that denies the half a million Jewish victims even their right to be victims.

Asked about the origins of the monument, András Heisler, president of the Federation of Hungarian Jewish Communities, says it was initially thought that a memorial may be part of the government’s elaborate and generous plan to commemorate the 70th anniversary of the Holocaust. But concerns grew that the commemoration events might only perpetuate the government’s narrative that ignores Hungary’s role in the war and the deportation of its Jewish citizens. With the backing of the community, Heisler rejected the government’s funding for Holocaust commemoration events.

Last January, the design for the monument was leaked and all hell broke loose. There were protests by historians, scientists and students. The government said it would postpone the plans until after the April elections, and most assumed there would be further discussions. There weren’t. The monument was revealed during the night of July 20—there was no ceremony, not even an unveiling. Since then, there have been daily protests. On Oct. 24, a crowd of more than 200 gathered in the pouring rain and listened to speakers. Historian Maria M. Kovacs said it was the 200th such demonstration.

The protesters at the monument aren’t the only ones concerned about recent developments here. Late last month, at the U.S. Embassy, André Goodfriend, the United States’ deputy chief of mission in Hungary, called his third meeting in a week to talk with journalists and announced that “certain public officials” had been barred from entering the U.S. He said the U.S. believes in an open society, transparency and a free press, and had noted some rather unfortunate trends in Hungary. Viktor Orbán, the prime minister, has mentioned a desire to build “an illiberal state” on the Russian model. One of his chief advisers has talked of the decline of the West and, in passing, of the international Jewish conspiracy. Another of his top-ranking lieutenants has advised that Hungary should get out of the European Union. (The EU, meanwhile, has accused Hungary of curbing press freedom and the judiciary.)

As for the monument, Kovacs says there are obvious reasons for the falsification of history: The Orbán government wants to rewrite the nation’s story, rather than face it the way other countries—Germany, for example—have done. Another reason is political expediency: to keep fascist sympathizers on the extreme right of the ruling FIDESZ party from leaving to join the far-right Jobbik party. Jobbik has risen to second place in Hungary’s parliament by tapping into anti-Semitic and anti-Roma sentiment. The ruling party may be the lesser of two evils, but, for many here, the signs are deeply troubling.