A terrorist under every rock

The news will tell you that terrorism is everywhere, but the violence rarely touches the West 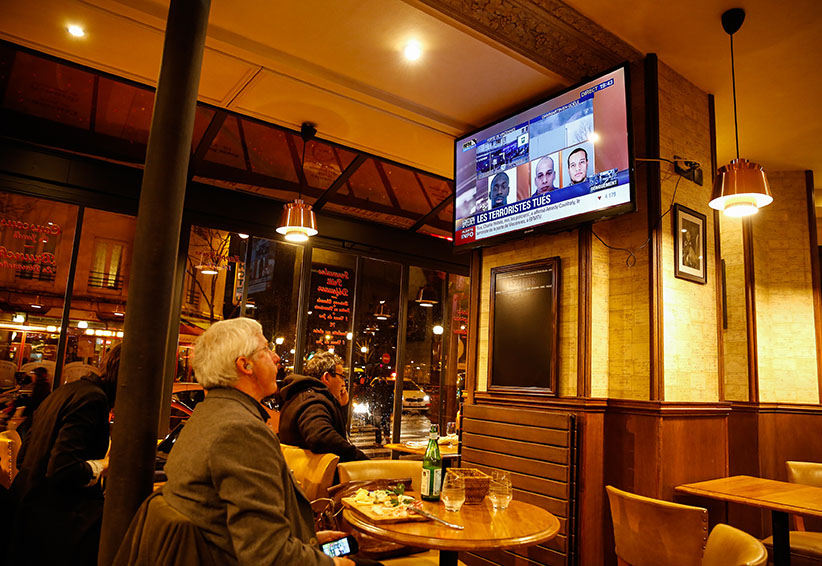 People watch breaking news on the television in a cafe as police mobilize to a hostage situation at Porte de Vincennes on January 9, 2015 in Paris, France. (Richard (Bord/Getty Images)

One of the most important lessons of the past year was that terrorists are everywhere and we’re all under threat, all the time. This is the grim reality 15 long years after 9/11—year after year of Muslims attacking the West, culminating most recently in the mayhem of Paris and the bloodshed of San Bernardino. And 2016 will likely be worse.

Except that none of this is true. The world is increasingly peaceful and the violence that is occurring is isolated and rarely touches the West. The overwhelming majority of terrorist attacks occur in Syria, Iraq, Afghanistan and Pakistan and are Muslims attacking Muslims. In the past 20 years, the number of successful jihadi plots in all Western countries combined has never surpassed eight per year. You’re more likely to be hit by lightning than be killed by a terrorist.

Yet, you are unconvinced. You are shaking your head as you read this. You know in your bones that terror is “the great struggle of our generation” to quote our previous foreign minister, John Baird. You pay attention to the news and you know that whenever there are reports of a mass killing, there’s a good chance the perpetrator is once again Muslim. On those occasions when you’re right, when it is a genuine Islamist terrorist attack, you know that it’s an existential threat that requires a dramatic and powerful response.

You’re not alone. After the Paris attacks in November that killed 130 people, the Western world was transfixed in horror. France declared a state of emergency, followed by three days of national mourning. President François Hollande convened a special congress of the French parliament, and changes to the constitution were promised as more bombers took off for Syria.

In the U.S., after the shootings in San Bernardino, Calif., Republican candidate Donald Trump swore that Americans “cannot be the victims of horrendous attacks by people who believe only in jihad.” Then he promised to ban all Muslims from entering the country and to force those already there to carry special ID cards. Even in Alberta, the Edmonton Public School Board suspended all overseas school trips, knowing that the outside world was simply too dangerous for its students.

Unfortunately, all of these are the feverish symptoms of mass hysteria. In France, cervical cancer is seven times more lethal than terrorism, but Hollande would be ridiculed for convening a special session of parliament to address that threat. In the U.S., you are 28 times more likely to be shot by a policeman than by a terrorist. But that’s a problem the Republican primaries won’t be debating. And the murder rate in Edmonton is almost twice that in Paris. Although I suspect the pitiable school trustees lack the math skills required to decipher “homicides per 100,000 people per annum,” or the common sense to know what to do with that information.

This is because we are navigating our 21st-century world with prehistoric brains. Our minds are wired for the Serengeti, not Facebook. Early Homo sapiens judged a risk by how often they saw it. Scientists call this the “availability bias.” If every spring you watched a pride of lions eat someone in your clan, your brain instinctively taught you to fear the roar of a lion. If you witnessed a giraffe trample someone to death only once, then you learned it was probably unwise to try to ride one, but you should not allow this to distract you from watching out for lions. After a blink of the evolutionary eye, it’s 2016. Now we see vivid pictures or read reports about terror attacks every single day. The constant availability of these images convinces our brain the biggest threat comes from jihadis. In this context, it’s almost understandable why the Edmonton school trustees acted with such embarrassing cowardice (almost).

In the New Year, learn to ignore the primal fears in your brain and relax. Remind yourself that you’re safe; safer than you were last year and every year before that. But remember that others, people in the Middle East and Africa, aren’t. And don’t let your politicians go on about how they’re going to protect us; demand to know what they’re doing to protect those less fortunate than us. Also, please check in with your doctor. Cancer is several thousand times more likely to kill you than a suicide bomber.