Bashar Assad: 'When you have many external factors that you don't control, it's going to drag on'

By Ian Phillips and Zeina Karam, the Associated Press September 22, 2016 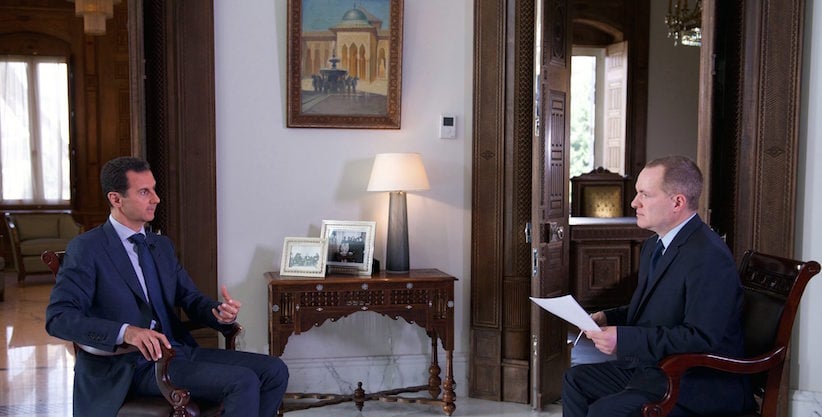 DAMASCUS, Syria — President Bashar Assad rejected U.S. accusations that Syrian or Russian planes struck an aid convoy in Aleppo or that his troops were preventing food from entering the city’s rebel-held eastern neighbourhoods, blaming the U.S. for the collapse of a cease-fire many had hoped would bring relief to the war-ravaged country.

In an interview with The Associated Press in Damascus, Assad also said deadly U.S. airstrikes on Syrian troops last week were intentional, dismissing American officials’ statements that they were an accident. Assad said the U.S. lacked “the will” to join forces with Russia in fighting extremists.

Read the transcript of this interview here.

Assad, who inherited power from his father and is now in his 16th year in office, cut a confident figure during the interview — a sign of how his rule, which once seemed threatened by the rebellion, has been solidified by his forces’ military advances and by the air campaign of his ally Russia, which turned the tables on the battlefield last year.

He said his enemies alone were to blame for nearly six years of devastation across Syria, and while acknowledging some mistakes, he repeatedly denied any excesses by his troops. He said the war was only likely to “drag on” because of continued external support for his opponents

“When you have many external factors that you don’t control, it’s going to drag on and no one in this world can tell you when” the war will end, he said, insisting Syrians who fled the country could return within a few months if the U.S., Saudi Arabia, Turkey and Qatar stopped backing insurgents.

He spoke Wednesday in Damascus’ Muhajireen palace, a white-stone building where he often receives guests, nestled among trees on the foothills of Qasioun Mountain. The Syrian capital, seat of Assad’s power, has stayed relatively untouched throughout the conflict, spared the devastation inflicted on other, opposition-held areas of the country. In recent months, Assad’s forces have taken rebel strongholds in suburbs of the capital, bolstering security and reducing the threat of mortar shells. 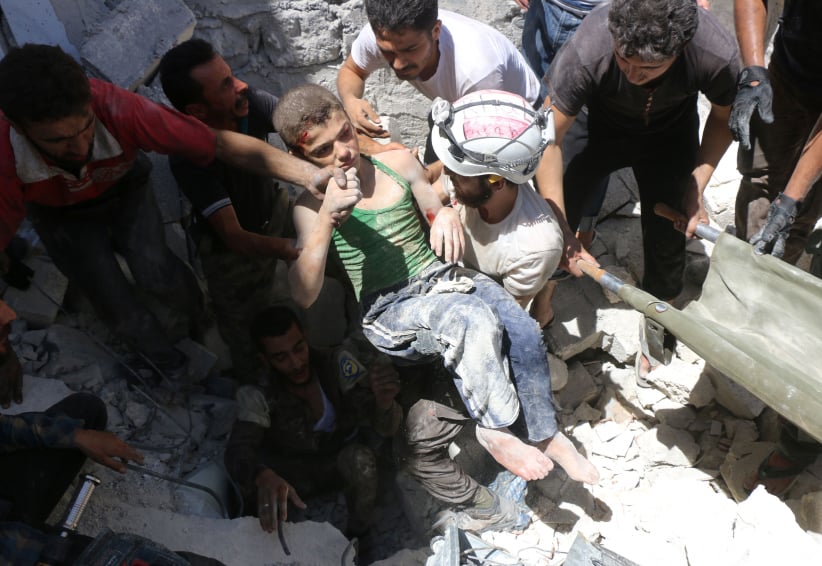 Syrian civil defence volunteers, known as the White Helmets, carry a young boy after they dug him out from under the rubble of buildings destroyed following reported air strikes on the rebel-held neighbourhood of Al-Mashhad in the northern city of Aleppo, on July 25, 2016. (Thaer Mohammed/AFP/Getty Images)

A senior U.S. administration official said the U.S. believes with a very high degree of confidence that a Russian-piloted aircraft carried out the strike. The official wasn’t authorized to speak publicly on the matter and asked for anonymity.

Assad dismissed the claims, saying whatever American officials say “has no credibility” and is “just lies.”

Like Syria, Russia has denied carrying out the convoy bombing.

Syria and the United States have been at loggerheads since the Sept. 17 U.S. airstrike last week that hit Syrian troops in the eastern province of Deir el-Zour. U.S. officials said the attack _ its first direct hit on Syrian forces since the civil war began _ was accidental and that the warplanes thought they were targeting Islamic State group positions. Russia said the strikes killed more than 60 Syrian troops, and afterward, IS militants briefly overran government positions in the area until they were beaten back.

Assad said he did not believe the American account and said that attack targeted a “huge” area constituting of many hills.

“It wasn’t an accident by one airplane … It was four airplanes that kept attacking the position of the Syrian troops for nearly one hour, or a little bit more than one hour,” Assad said in the interview. “You don’t commit a mistake for more than one hour.”

“How could they (IS) know that the Americans are going to attack that position in order to gather their militants to attack right away and to capture it one hour after the strike?” Assad asked. “So it was definitely intentional, not unintentional as they claimed.”

The strikes contributed to the collapse of the cease-fire, which had already been marred by numerous violations on both sides of the conflict. They also cast serious doubt on chances for implementing an unprecedented U.S.-Russian agreement to jointly target militants in the country.

Despite extensive evidence to the contrary, Assad repeatedly denied that his forces were besieging opposition-held eastern Aleppo, which has become a symbol both of resistance and also the high price civilians are paying in the war.

He flatly denied claims of malnutrition and a chronic lack of medical supplies.

“If there’s really a siege around the city of Aleppo, people would have been dead by now,” Assad said, asking how rebels were able to smuggle in arms but apparently not food or medicine.

The ancient city, now partly destroyed, has been carved out into rebel and government-controlled areas since 2012. Rebel reinforcements broke a hole in the blockade in August. But in heavy bombardment over the following weeks, more than 700 civilians were killed. Earlier this month, Syrian troops backed by Russian airstrikes retook the roads and the siege resumed.

Since then, the U.N. has accused Assad’s government of obstructing aid access to the city, despite an agreement to allow aid in during the weeklong cease-fire. During the brief cease-fire, trucks carrying aid sat idle by the nearby Turkish border, awaiting permits and safety guarantees.

Throughout the conflict, Assad’s forces have been accused of bombing hospitals and civilians and choking opposition cities. Millions have fled Syria, some of them drowning at sea in the Mediterranean.

The war has been defined by gruesome photos and video posted in the aftermath of bloody attacks or documenting the plight of children in particular. Hundreds of thousands of people have been killed, and once thriving cities have been ravaged, with entire blocks reduced to rubble. The images have galvanized public opinion worldwide — but Assad, while acknowledging that the war had been ‘savage,’ said eyewitness accounts should not be automatically believed.

“Those witnesses only appear when there’s an accusation against the Syrian army or the Russian (army), but when the terrorists commit a crime or massacre or anything, you don’t see any witnesses… So, what a coincidence,” he said.

Assad scoffed at the idea that Syria’s “White Helmets” —civil defence volunteers in opposition held areas seen by many as symbols of bravery and defiance — might be considered for a Nobel Peace Prize after a nomination earlier this year.

“What did they achieve in Syria?” he said. “I would only give a prize to whoever works for the peace in Syria.”

The group shared this year’s Right Livelihood Award, sometimes known as the “Alternative Nobel,” with activists from Egypt and Russia and a Turkish newspaper, the prize foundation announced Thursday.

Asked about his methods, including the use of indiscriminate weapons, Assad said “when you have terrorists, you don’t throw at them balloons, or you don’t use rubber sticks for example. You have to use armaments.”