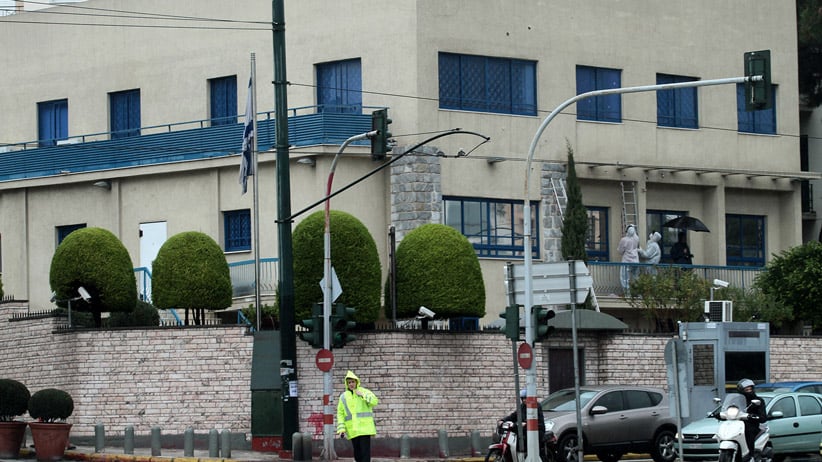 Gunmen on motorcycles fired dozens of shots at the Israeli embassy in Athens this morning. No one was hurt. No group has claimed responsibility. And, as of this writing, nothing is known about the assailants.

That hasn’t stopped Israel from blaming the incident on “incitement” by Palestinian Authority President Mahmoud Abbas and pro-Palestinian organizations.

“The terrorist attack in Athens earlier today, during which automatic gunfire was aimed at the Embassy of Israel is another link in the chain of violence caused by the Palestinian anti-Israeli incitement being spread throughout the world by Palestinian Authority President Mahmoud Abbas and pro-Palestinian organizations,” reads a statement issued by Israel’s Foreign Ministry.

“The international community should strongly condemn this ongoing incitement and the resulting violence and terrorism.”

Israel similarly blamed Palestinian government incitement for a series of recent attacks in and around Jerusalem, including one in which four rabbis and a policeman were murdered at a synagogue.

Relations between Israelis and Palestinians have been even more strained of late, in large part because of tensions surrounding the Temple Mount, a Jerusalem compound known to Muslims as the Holy Sanctuary. It contains the al-Aqsa Mosque and is the site of Judaism’s Second Temple. Non-Muslims currently have limited access to it. Some right-wing Israelis want to change that, though Israeli Prime Minister Benjamin Netanyahu has said he will preserve the status quo.

Israel accused Abbas, who condemned the synagogue murders, of stoking tensions over the compound, contributing to an “atmosphere of violence” that led to the attacks.

Khaled Elgindy, a fellow at the Brookings Institution who previously advised the Palestinians on negotiations with Israel, rejected that explanation.

“People don’t go on a killing rampage because someone sitting in Ramallah [the de facto capital of the Palestinian West Bank] pushed a button or wrote something in a newspaper or said something on the radio,” he said in an interview with Maclean’s last month.

But the attacks in Jerusalem did take place in the midst of steadily escalating animosity and political confrontation. Yehuda Glick, an activist who wants more Jewish access to the Temple Mount, told Israeli media that the Palestinian man who shot and wounded him told him, before pulling the trigger: “I’m sorry, but I’m shooting you because you defile al-Aqsa.”

The attacker, who was shot dead, was reportedly a member of Islamic Jihad, and was therefore unlikely to have much cared what Abbas had to say.

Still, it’s plausible that Israel believes the Palestinian government bears some responsibility for the attack on Glick, and others, in recent months in Israel.

It’s a little harder to take seriously Israel’s assertion that Abbas incited today’s attack in Athens. We don’t know who attacked the embassy or why. Neither does Israel’s Foreign Ministry. Israel seems intent on discrediting Abbas as a potential negotiating partner. Why anyone in the Israeli government might think this is a good idea eludes me.