At the UN, bracing for the arrival of Donald Trump

The U.S. president says he wants to 'make the UN great.' The Honourary Consul from Senegal says: 'I just hope he doesn’t offend anybody.' 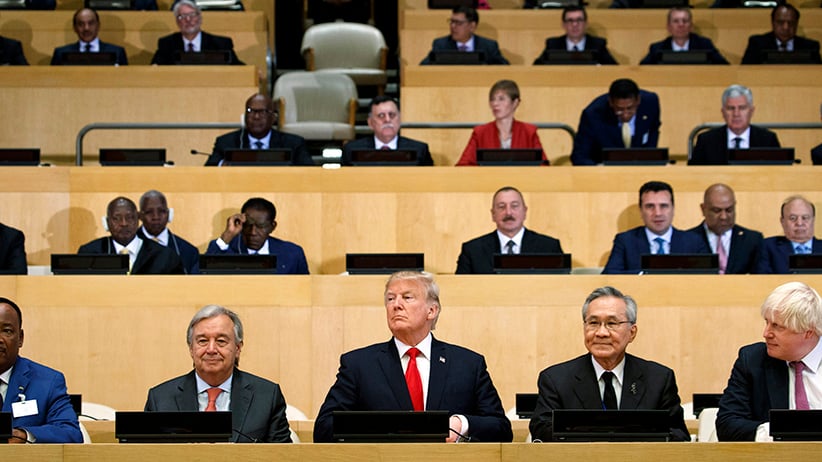 Standing-room, sweating, at six in the morning, the D Train out of Brooklyn. Work crews delaying the halting, lurching subway, a century on the same trestles.

A mother in nurse’s smocks with wailing twins, defeated before the sun even rises. Dark city-mist shrouding the cables of the Manhattan Bridge, completed 1909, as the lit cars wend across. Lurking offshore is Hurricane José, named for half the men on the train.

Bound for labour, love, or study: Latinos in Yankees caps, Chinese, Africans, Hebrews, islanders, domestics, teamsters, yearners, strivers, bringing their talents, their traditions, their tattoos and their inner torments to the capital of the world.

“Living here is a dream come true,” an advertising placard above us reads. “In my next life, remind me to dream of a bigger apartment.”

One old correspondent, made right here in a tiny Fred Trump flat, rides toward shining Manhattan in a poorly-fitted suit, nearer every mile to the end of the line.

“Jobs come and go,” soothes a billboard for the School of Practical Philosophy. “Physical beauty fades, markets rise and fall. Even close relationships can end. But the benefits of philosophy last a lifetime.”

At the station at 42nd Street and the Avenue of the Americas: cops on every platform and eyeing every staircase.

The Donald’s back in town.

Six blocks east, past barricades of steel and stone, guarded by hundreds of light-blue-jacketed gendarmes, its once-shining marble buildings stained with age and mould and failure, the United Nations awaits the American President. Donald Trump—another New York City subway boy, from the terminus of the F Train in Queens—is due on this Monday morning at a committee meeting, and then again on Tuesday for the biggest speech of his desultory and destructive diplomatic career.

“The United Nations has such great potential but right now it is just a club for people to get together, talk and have a good time. So sad!” he tweeted less than a year ago.

The world’s great palace of palaver braces for the storm.

“What do you expect from Trump?” a delegate from Kazakhstan is asked in the corridor below the great Chagall window.

“Only God knows,” the man replies. “God and Trump.”

“What do you expect from Trump?” a volunteer from Ecuador is asked in the kiosk of the United Nations Women’s Guild, which works around the world to salve the orphaned, the disabled, the forgotten.

“Something stupid,” she replies.

But there is more. The Ecuadorian left her continent when she was 11 years old; since then, her home has been the Borough of Queens.

“Where I live is the United Nations,” she says, and this is the message of the D Train, and the F Train, and the City of New York, that in prosperity can peoples live in peace. No wonder Osama Bin Laden tried to knock it down, another September ago.

“Do the words ‘America First’ frighten you?” a visitor wonders.

“No,” she answers. “We are a superpower. We should be first, the country that all other countries look up to and aspire to be. But we are not that now.”

“Trump says that the United Nations is just a social club,” she is reminded.

“Yes,” she says. “It is. Just talking. Just talking. The good works they do—health, agriculture, the children, that is not politicians. That is people.”

Upstairs, in what used to be the chamber of the Trusteeship Council—back when the UN placed territories in the care of white, wealthy warders until they were ready to be free —talking and talking and talking. The topic is Hurricane Irma, the Caribbean in ruins.

“Debris and dead animals,” a government minister from Antigua and Barbuda is saying. “Compromised sanitation . . . people wandering about dazed and confused.”

(Fifty years ago, a Brooklyn boy summering as a Manhattan mailman used to duck in here to sleep in the air conditioning after all the parcels got delivered.)

“We are small, poor countries,” echoes the delegate from the Dominican Republic. “Climate change is not a subject of debate . . . it is the truth.”

The Non-Aligned Movement committee on Palestine. Championing Sustainable Development and the Pathway to Zero Hunger.

Learning From Small-Island Development States to Accelerate MultiSectoral Action in Support of the 2025 Non-Communicable Diseases Targets.

Trade in Minors in the Digital Age: Waking Up the World to the Dire Need to Stop Trade in Children, Child Prostitution, and Child Pornography, Including Via the Internet.

So much to do. One man to lead.

On Monday morning, Donald Trump makes a brief appearance at a meeting called to discuss the future of the United Nations. The first thing he talks about is how wise he was to build a condo tower on First Avenue, just above a block that was named for Raoul Wallenberg.

Someday, streets may well be named for Donald Trump. But in what country?

“I actually saw great potential right across the street, to be honest with you, and it was only for the reason that the United Nations was here that that turned out to be such a successful project,” crows the billionaire.

(The Dow Jones Industrial Average is up another 70 points. Pace, School of Practical Philosophy: Under President Donald Trump, markets only rise and rise.)

“What will you talk about tomorrow?” the chief executive is asked by an eager scrum as he leaves the building.

On Tuesday at the United Nations, 34 heads of state and government will address the General Assembly. Four of them will be women. The President of the United States will speak second, after Brazil and before the Republic of Guinea. It may be the only time in his presidency that Trump is introduced as “His Excellency.”

“What do you expect from Trump?” a delegate from Nigeria is asked on the eve of the great man’s address.

“What he does is so unpredictable,” says an Honourary Consul from Senegal. “I just hope he doesn’t offend anybody.”

Two men from Bangladesh, members of a delegation, are taking selfies in front of the gift shop, laden with souvenirs. It is their first time in the citadel of confabulation, in the capital of the world.

“What do you expect from Trump?” the beaming men are asked.