Image of the Week: Germany's unflappable, long-serving chancellor departs the political stage with a rare show of vulnerability 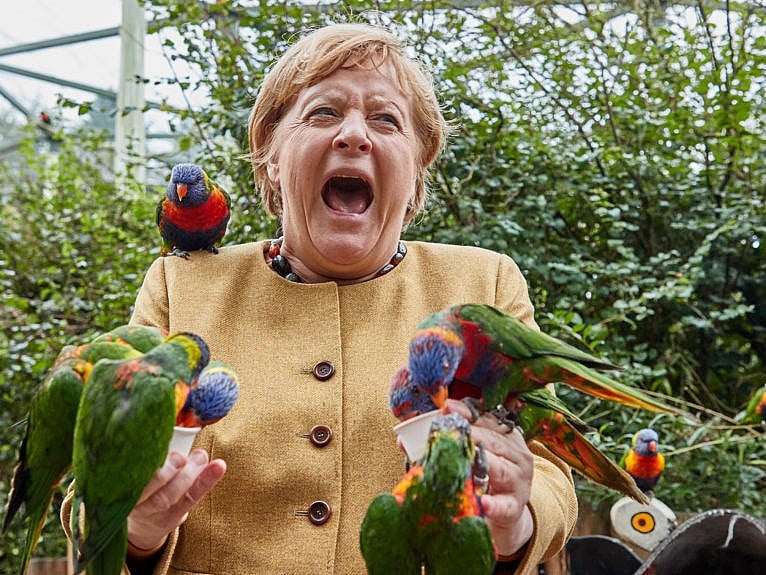 Merkel gets nipped by a Rainbow lorikeet—a species of parrot—while touring a bird park in northeastern Germany. (Georg Wendt/Getty Images)

On Sunday, Germans will elect a chancellor to replace Angela Merkel, the woman who’s led them through 16 years of crises. From the largest mass migration of asylum-seekers since the Second World War to the election of Donald Trump, sandwiched between the 2008 financial meltdown and a global pandemic, Merkel has remained admirably pragmatic. Rarely did she show emotion, even when she stood infamously face-to-face with a young Palestinian refugee, whose family was nearly deported: Merkel made the girl cry when she said, equal parts politely and frankly, that not all refugees got to stay. Merkel was criticized then for her candour, yet her country took in more migrants than any other European country. Despite a shaky first year marked by sporadic terrorist attacks, and significant unemployment among the newcomers continuing to this day, Germany’s acceptance of a million-some migrants is largely viewed as a success. This dichotomy speaks to the heart of the Merkel brand. Her centre-right bloc, the Christian Democratic Union, has specialized in a kind of thoughtful conservatism that has variously brought progress to the country and held it back. Critics note that Germany has remained stagnant on important issues such as climate change and economic reliance on China, and Merkel’s diplomatic skill in keeping the European Union afloat may have only been temporary, as the authoritarian rise of governments in Poland and Hungary echo those of muscle-flexing Turkey and Russia. One thing is certain: as emotions and political polarization run amok in the 21st century, Germany benefitted from a staunch and stoic leader. Now, finally, on a farewell tour of her home state, she can unwind. Even if it takes a flock of parrots to get a rise out of her.

FILED UNDER: Angela Merkel Editor's Picks Image of the week