Ban Ki-moon on Paris Agreement: 'We are in a race against time' 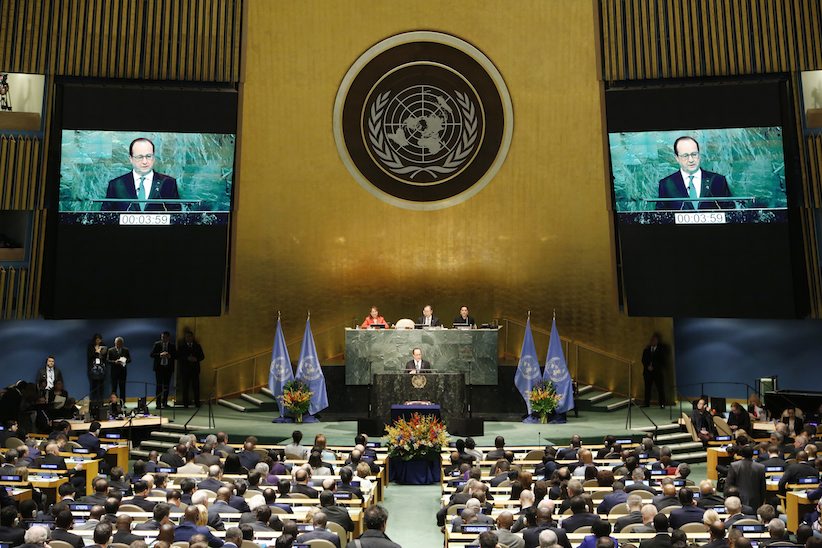 Leaders from 171 countries were signing the Paris Agreement on climate change Friday as the landmark deal took a key step forward, potentially entering into force years ahead of schedule.

U.S. Secretary of State John Kerry, holding his young granddaughter, joined dozens of world leaders for a signing ceremony that sets a record for international diplomacy: Never have so many countries signed an agreement on the first available day. States that don’t sign Friday have a year to do so.

“We are in a race against time,” U.N. secretary-General Ban Ki-moon told the gathering. “The era of consumption without consequences is over.”

Many now expect the climate agreement to enter into force long before the original deadline of 2020. Some say it could happen this year.

After signing, countries must formally approve the Paris Agreement through their domestic procedures. The United Nations says 15 countries, several of them small island states under threat from rising seas, were doing that Friday by depositing their instruments of ratification.

China, the world’s top carbon emitter, announced it will “finalize domestic procedures” to ratify the Paris Agreement before the G-20 summit in China in September. Ban immediately welcomed the pledge.

The United States also has said it intends to join the agreement this year. The world is watching anxiously: Analysts say that if the agreement enters into force before President Barack Obama leaves office in January, it would be more complicated for his successor to withdraw from the deal because it would take four years to do so under the agreement’s rules.

The United States put the deal into economic terms. “The power of this agreement is what it is going to do to unleash the private sector,” Kerry told the gathering, noting that this year is again shaping up to be the hottest year on record.

The agreement will enter into force once 55 countries representing at least 55 per cent of global emissions have formally joined it. Maros Sefcovic, the energy chief for another top emitter, the 28-nation European Union, has said the EU wants to be in the “first wave” of ratifying countries.

French President Francois Hollande, the first to sign the agreement, said Friday he will ask parliament to ratify it by this summer. France’s environment minister is in charge of global climate negotiations.

“There is no turning back now,” Hollande told the gathering.

Countries that had not yet indicated they would sign the agreement Friday include some of the world’s largest oil producers, including Saudi Arabia, Iraq, Nigeria and Kazakhstan, the World Resources Institute said Thursday.

The Paris Agreement, the world’s response to hotter temperatures, rising seas and other impacts of climate change, was reached in December as a major breakthrough in U.N. climate negotiations, which for years were slowed by disputes between rich and poor countries over who should do what.

Under the agreement, countries set their own targets for reducing emissions of carbon dioxide and other greenhouse gases. The targets are not legally binding, but countries must update them every five years.

The latest analysis by the Climate Interactive research group shows the Paris pledges put the world on track for 3.5 degrees C of warming. A separate analysis by Climate Action Tracker, a European group, projected warming of 2.7 degrees C.

Either way, scientists say the consequences could be catastrophic in some places, wiping out crops, flooding coastal areas and melting Arctic sea ice.

“This is not a good deal for our island nations, at least not yet,” the chair of the Alliance of Small Island States, Nauru President Baron Divavesi Waqa, told the gathering. “The hardest work starts now.”

As the Paris Agreement moves forward, there is some good news. Global energy emissions, the biggest source of man-made greenhouse gases, were flat last year even though the global economy grew, according to the International Energy Agency.

Still, fossil fuels are used much more widely than renewable sources like wind and solar power.

Friday was chosen for the signing ceremony because it is Earth Day.