Bernie Sanders in L.A.: Did someone say Public Enemy?

Paul Wells: Prior to Super Tuesday, the Democratic front-runner rallied in California with a curious crew of celebrities. Only one person there mattered. 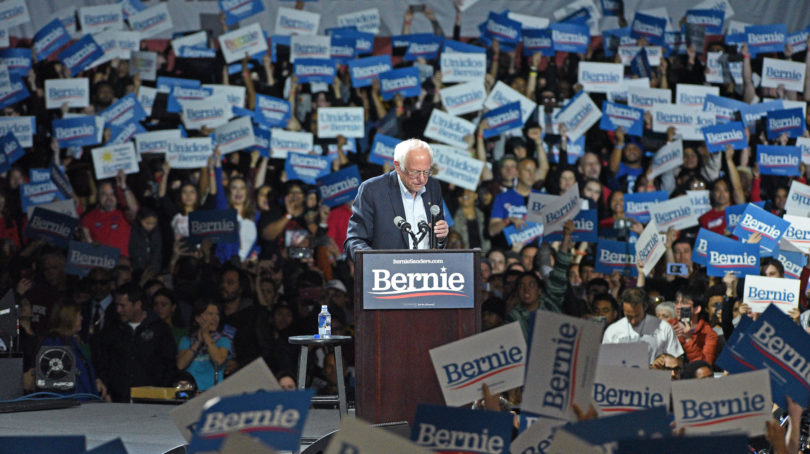 As a show-business show of force on the eve of the California primary (well, technically the eve of the eve), the Bernie Sanders rally on Sunday at the Tom Bradley Hall of the Los Angeles Convention Center was maybe one step up from a dud. It was the prospect of a Sanders-Public Enemy double bill that brought me to L.A. from Ottawa, but the great ’80s and ’90s rap band had only intermittent pop success even then, and it’s been a while. Rounding out the bill with Dick Van Dyke and Sarah Silverman ensured some amiable political humour, but neither of them is exactly at the heart of political Hollywood these days either. (“I’m what’s left of Dick Van Dyke,” the comedian, now 94, told the crowd of perhaps 17,000.)

Of course, as it turned out, this was, to some extent, the point. Politicians generally deploy celebrities to send demographic or cultural signals about themselves. Pat Boone and Frank Sinatra campaigned for Ronald Reagan in 1980. Half the movie and music industries shot a video for Barack Obama in 2008. Bill Clinton made Fleetwood Mac’s song Don’t Stop his theme in 1992. Fleetwood Mac and Sinatra were closer to their hit-making days in those election years than Public Enemy is today, and Pat Boone was younger then than Sarah Silverman is today. The message Sanders was sending was: All right, look, here are some celebrities, I guess. Now can we get back to talking about the exploitation of the American worker?

As far as I can tell, nobody at the Los Angeles Convention Center felt slighted. There’s Bernie’s America and there’s Seriously Not Bernie’s America, but the latter was nowhere to be seen on Sunday at the Tom Bradley Hall.

California and 13 other states will hold primaries this week on Super Tuesday, and California has been Bernie country since he stole the lead in polling averages in the last days of 2019. He’s got almost twice Joe Biden’s support in the state.

The prospect of a man who wasn’t a registered Democrat for any part of his 40-year political career—and who has been beating centrist Democrats since he was elected mayor of Burlington, Vt. in 1981—becoming the runaway favourite to win the Democratic presidential nomination is disconcerting to lots of people. The New York Times opinion pages are melting down. “Bernie Sanders is not a liberal Democrat,” David Brooks wrote. “He’s what replaces liberal Democrats.” “The guy who was angry about the downfall of Salvador Allende’s Marxist regime in Chile in 1973 is still angry about it today,” Bret Stephens wrote.

(I guess one sign I’ve attended a Bernie Sanders rally is that I now find myself fact-checking Bret Stephens. Allende didn’t downfall, he was pushed, by the CIA. And Augusto Pinochet replaced him. Sanders’ apparent continuing fondness for Fidel Castro is harder to stomach, but I think a guy still gets to be mad about Chile.)

But for most of Sunday’s rally, Sanders’s relationship with the Democratic Party was simply ignored. One of the 78-year-old candidate’s favourite slogans is “It’s not me, it’s us.” But it kind of really is him. The crowd that lined up for three hours and sat on a concrete floor for two to hear their man was diverse, cheerful and largely in its 20s and 30s. Bernie merchandise was overwhelmingly the preferred wardrobe option. VEGAN ARMY, one guy’s T-shirt said. DRONE STRIKES CREATE SUICIDE BOMBERS, said a second, while a third went with BE A GOOD PERSON. A woman waved a hand-lettered sign reading LESBIAN DOG MOMS 4 BERNIE.

During the interminable wait, a few in the crowd got news alerts on their phones. “Pete Buttigieg’s droppin’ out!” the guy in front of me said. “Pete Buttigieg’s droppin’ out!” Incredulity gave way to quiet satisfaction as news spread that the relentlessly centrist South Bend mayor was throwing in the towel. He had almost certainly done so, in part, to ensure that the anti-Sanders vote doesn’t get split. (As, a day later, would Amy Klobuchar.) But anyone hoping for something more visceral than a “How about that”—a chant? Urgent conferring over delegate projections?—would have been disappointed.

Sanders doesn’t really run against the other Democrats, or measure his progress by theirs. During the two and a half hours of the rally, nobody mentioned Buttigieg, or Joe Biden or Elizabeth Warren. And it soon became evident that the slightly bedraggled delegation from the world of show business was not more important to the success of the event than the speakers from labour unions, NGOs, and, well, Chile.

The latter was represented by Ana Tijoux, a firebrand Chilean rapper, born in exile in France for reasons that would bore Bret Stephens. “We can have so many differences between us,” she told the crowd. “We’re all different. But we have one common enemy. And this enemy is called Fascistas.”

The evening’s other endorsers included Jesus “Chuy” Garcia, an Illinois Congressman from the class of 2018; Bonnie Castillo, the head of the country’s largest nurses’ union; and Patrice Cullors, a co-founder of Black Lives Matter, who called on the crowd both to resist Donald Trump “and his crew of white supremacists” and to resist the urge to replace Trump with “a softer, more liberal version.”

Silverman’s role was to make fun of soft liberals who get conniptions at the thought of a Sanders nomination. “All right, kitten, calm down,” she said. “First of all, socialism is not communism. Second of all, Bernie is a democratic socialist.” We can all look forward to months more of this parsing.

“Let’s talk a little bit about Bernie’s platform,” Silverman said. “Health care and education for all. What an asshole!”

Finally the candidate himself spoke. He is famous for delivering long, hectoring speeches, but he has learned a thing or two in two presidential runs, and this speech would last only 20 minutes. “I think we’re going to get the message out fairly shortly,” he said, “and that is, we’re going to defeat the most dangerous president in modern American history!”

His speech was a list of policy proposals his supporters know well—a $15 minimum wage, pay equity, measures that would make it easier to join labour unions, infrastructure programs.

“They’re seeing workers stand up and demand decent wages. Young people rise up and demand a higher education without going in debt. They’re believing health care is a right, not a privilege.”

“And the fossil fuel industry—whoa. They’re catching on that the American people understand that short-term profits are not more important than the future of our planet.”

He promised to “end a broken and racist criminal-justice system,” to “end cash bail in America” and to “end corporate for-profit prisons.”

He said he’s been investigating what a president can do by executive order, and what needs acts of Congress. “And it turns out you can legalize marijuana in every state in the union by executive order!” It was one of his most popular lines.

Much more quickly than I’d expected, Sanders called it a night. Chuck D, the founder of Public Enemy, took the stage with some uniformed men younger than some of the band’s hits. Sanders hugged several of the band’s members as he left. Flavor Flav, the band’s comic relief, had been publicly furious at Chuck D for taking this gig, and at some point on Sunday, Chuck announced Flav had been fired from Public Enemy. Honestly it felt like an unfortunate pretext for a fallout. Chuck D’s deep dismay at economic and police injustice are close to themes Sanders has put at the centre of his campaign, but the band was no more central to the success of this rally than anyone else is to Sanders’ appeal. It’s him, not us.

There have been presidential candidates who spoke pointedly about the legacy of exploitation that Sanders puts at the heart of his campaign. Jesse Jackson most prominent among them, in 1984 and 1988. Each was beaten by candidates who promised a gentler approach based on consensus-seeking. Sanders isn’t interested in consensus the way it’s been defined for generations in American politics. Against a president who refuses to obey the agreed-upon forms, it’s no wonder Sanders would rise. Can he rally voters who think he’s the worst thing that could happen to the Democratic party? Can he sway the independent voters in November who sealed Trump’s victory in 2016? My theories are no better than anyone’s, but I suspect we’ll soon find out.