Blogger hacked to death in street attack in Bangladesh

Avijit Roy, a prominent Bangladeshi-American blogger, was a voice against religious extremism 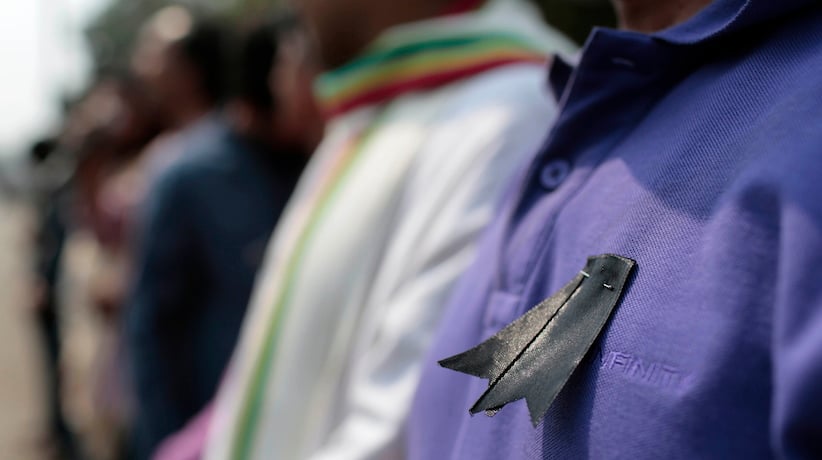 A Bangladeshi social activist wears a black ribbon as a protest against killing of Avijit Roy. AP Photo/ A.M. Ahad

DHAKA, Bangladesh – A prominent Bangladeshi-American blogger known for speaking out against religious extremism was hacked to death as he walked through Bangladesh’s capital with his wife, police said Friday.

The attack Thursday night on Avijit Roy, a Bangladesh-born U.S. citizen, occurred on a crowded sidewalk as he and his wife, Rafida Ahmed, were returning from a book fair at Dhaka University. Ahmed, who is also a blogger, was seriously injured.

Police have named no suspects in the attack. Roy was a prominent voice against religious intolerance, and his family and friends say he had been threatened for his writings.

Similar attacks in the past in Bangladesh, a Muslim-majority nation of 160 million people, have been blamed on Islamic extremists.

About 8:45 p.m. Thursday, a group of men ambushed the couple as they walked toward a roadside tea stall, with at least two of the attackers hitting them with meat cleavers, police Chief Sirajul Islam said. The attackers then ran away, disappearing into the crowds.

Two blood-stained cleavers were found after the attack, he said.

Roy had founded a popular Bengali-language blog, Mukto-mona, or Free Mind, which featured articles on scientific reasoning and religion.

The website has apparently been shut down since the attack. Roy defended atheism in a January posting on Facebook, calling it “a rational concept to oppose any unscientific and irrational belief.”

Anujit Roy, his younger brother, said Roy had returned to the country earlier this month from the U.S. and was planning to go back in March.

In 2013, another blogger, Ahmed Rajib Haider, who also spoke out against religious extremism, was killed by still-unidentified assailants near his Dhaka home. In 2004, Humayun Azad, a prominent writer and teacher at Dhaka University, was seriously injured in an attack when he was returning from the same book fair.

Baki Billah, a friend of Roy and a blogger, told Independent TV that Roy had been threatened earlier by people upset at his writing.

“He was a free thinker. He was a Hindu but he was not only a strong voice against Islamic fanatics but also equally against other religious fanatics,” Billah said.

“We are saddened. We don’t know what the government will do to find the killers. We want justice,” he said.