Brexit: Where to watch

Where Canadians and ex-pats can monitor the Brexit vote 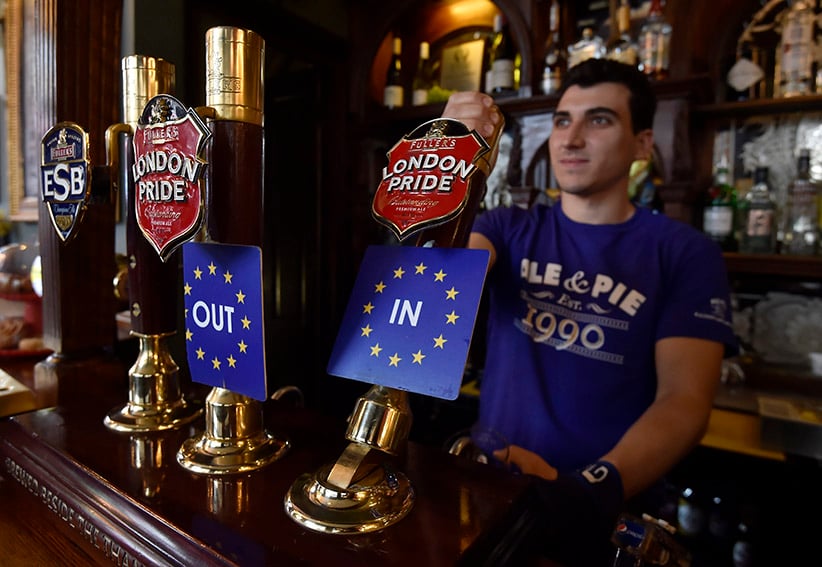 A bar tender pulls a pint of beer decorated with EU Referendum beer taps in a pub in central London. (HANNAH MCKAY/EPA/CP)

Going to a British pub to watch the Brexit results doesn’t exactly exude the same party-like atmosphere as, say, gathering to watch England play soccer in the World Cup. But there’s a lot more riding for the country’s future based on the results of this vote, which will determine whether the country leaves or stays as a member the European Union. So where will expats gather for the historic event?

The Queen & Beaver Public House is among the few British pubs in Toronto that plans to showcase Brexit news on their TVs all day. There won’t be anything special inside to mark the event, save for perhaps a bunch of expats at the bar feeling tense about whichever way the voting turns out.

Polling stations closed at 10 p.m. local time in the U.K.—5p.m. EST—and results will start to filter in around 90 minutes later. By 11 p.m. EST, results from about half the of counting areas should be in, but—if it’s a close as some pollsters predict—it won’t be until about 2 a.m. EST before all the votes are counted an the official result is announced.

For those who can’t wait until they wake up for breakfast to hear the results and prefer the comfort of their own homes to watch, Sky News and BBC World News will have constant coverage while WikiLeaks founder Julian Assange is hosting a live stream with “what you won’t see on the BBC.” The Guardian will also have live coverage via its EU referendum page.

And regardless of which whether Brits vote Remain or Leave, the country can still unite again on Monday for soccer as England goes head-to-head against Iceland for a spot in the quarterfinals of EURO 2016. That’ll pack the pubs.