Bringing down the house in Pakistan 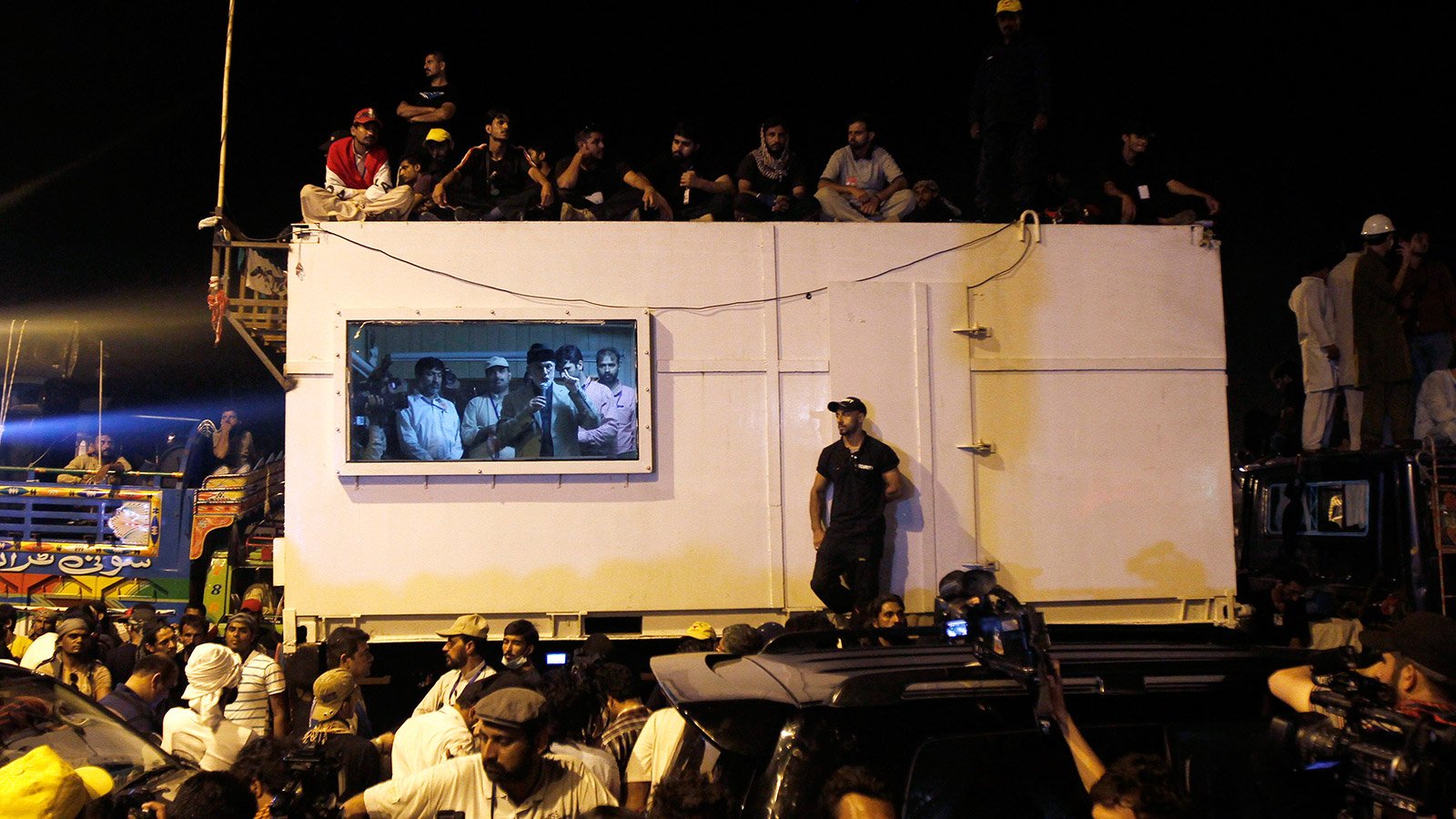 It’s fair to say that the political game in Pakistan swings wildly back and forth like an out-of-control pendulum. Not more than a year ago, things looked promising: A general election had been held and, by most accounts, it was successful—even historic, according to some. For the first time in Pakistan’s brief existence, one civilian government relinquished power to another, peacefully and without military interference.

The transition was so smooth, pundits praised it as a “new democratic era” in Pakistan. Nawaz Sharif, the millionaire businessman, and his Pakistan Muslim League (PML-N) took the reins of power for the third time, promising to dig the country out of its economic malaise, tackle rampant corruption and find a negotiated end to its crippling war against Islamist militants.

But, over the ensuing weeks and months, the economy showed few signs of improving, and power shortages continued to create havoc for most Pakistanis, while the elite maintained a standard of living that bordered on the obscene. Meanwhile, negotiations with the Pakistani Taliban collapsed, leading to a fresh military offensive in Pakistan’s Tribal Areas and hundreds of thousands of new refugees.

More from Adnan R. Khan:
Inside the dangerous world of Pakistan’s gem trade
Iraq: A nation dissolves
The high cost of negotiating with terrorists

By the end of June, the stage was set for something dramatic. Cue Imran Khan, the former cricket star turned populist politician, who announced that his party, the Pakistan Tehreek-i-Insaf (PTI), had had enough. Khan claimed that for months, he had lobbied the government and the courts to investigate alleged voter fraud in the elections and, for months, he had been snubbed. On June 27, with his usual ﬂair for the dramatic, he announced what he called a “tsunami march,” promising a million people, united in their desire for political change, walking in lockstep from Lahore in the northeast to Islamabad, the Pakistani capital, 300 km away. “All of Pakistan knows that the elections were rigged,” Khan told a boisterous crowd of supporters in Bahawalpur, a city in southern Punjab province. “God willing, a sea of PTI supporters will flood Islamabad.”

Khan was joined by a new face in Pakistan’s colourful mosaic of would-be saviours: Muhammad Tahir ul Qadri, a moderate Islamic scholar who had spent seven years living in exile in Toronto before returning to Pakistan in December 2012 to lead what he called a “revolution” against a corrupt political system.

Qadri made waves in Western political circles in 2010 when he published a 600-page religious edict, or fatwa, condemning terrorism as an evil that is against all Islamic teaching. Instantly, he became a media success in North America and Europe. The U.S. State Department called his ruling a “very important step” in “taking back Islam” from radicals.

His was, by all accounts, a remarkable emergence on the international scene. For years, Qadri had lived what his acquaintances in Toronto described as a “semi-retired” life, focusing on his own health and his academic writing covering Islamic issues from a moderate, Sufi perspective. He ran a global network of mosques and schools, the Minhaj-ul-Quran, but his followers in Toronto reportedly numbered no more than 400.

His return to Pakistan was as explosive as his fatwa. Billboards displayed his gentle, grandfatherly face; television commercials announced his return and promoted a January 2013 plan to muster a five-million-man march on the Pakistani capital, sparking rumours of more powerful forces pulling the strings. Allegations of collusion with the military began to spread. How, some Pakistanis asked, could this former exile, a preacher who embraced the Sufi doctrine of simplicity, suddenly afford the massive PR campaign that accompanied his arrival to his homeland?

“Pakistanis were in awe of this guy,” recalls Zayer Hassan, 26, a filmmaker in Islamabad. “He somehow managed to hire 50,000 buses to bring people to the march. You couldn’t go a day without seeing him on television talking about his revolution.”

Still, instead of the promised millions, Qadri managed a mere 50,000, according to official figures. Some thought Qadri would cut his losses and slink back to Canada, where he faced serious questions about his trip to Pakistan. According to Pakistani news reports, Qadri had applied for asylum in Canada in 2008, claiming his life was in danger in Pakistan after he met with the Danish cartoonist responsible for the controversial caricatures of the prophet Muhammad, published in Denmark’s Jyllands-Posten newspaper.

His application was accepted. But, in December 2012, only a few months after receiving his Canadian citizenship, he was back in Pakistan. The RCMP, the Pakistani reports claimed, were not impressed. And, instead of abandoning his mission and returning to his less than remarkable life in Toronto, Qadri now vowed to soldier on. “I will not stop until I see a Pakistan freed from the clutches of this mafia government,“ he told a crowd of thousands in Gujranwala, a city near Lahore, in February 2013. “No power in this world can stop this revolution.”

Since then, he has called so often for revolution that the Urdu word for it—inquilab—has become a joke on social media. To his credit, he has kept his promise of not stopping. In August, he joined Khan in his call for a march on the capital, dubbing his protest—not surprisingly—the Inquilab March.

Supporters from both camps converged on the Pakistani capital on Aug. 16, an estimated 20,000 to 60,000 in total, not quite the “sea” Khan had promised, nor the “revolution” Qadri had hoped for. Nonetheless, both refused to back down, despite a complete lockdown of the city. Khan called on Pakistanis to boycott the government. “We will not pay taxes, electricity or gas bills,” he told supporters who had gathered on the edge of Islamabad’s so-called “red zone,” the heavily guarded government quarter where both the parliament and the prime minister’s official residence are located.

Despite the apparent weakness of the protests, Sharif appeared to panic. In a surprise move, he ordered the police not to intervene and turned instead to his erstwhile enemies in the military for help. The army complied, sending out forces to surround key government buildings in the red zone, including the parliament, but it refused to intervene, despite protesters cutting through razor wire and commandeering a crane.

Tens of thousands now remain camped out in front of the parliament in what locals tell Maclean’s feels more like a festival than a protest. On Aug. 18, Khan raised the stakes again by announcing that his party, which holds 34 seats in the National Assembly, would quit the government. Four days later, 30 PTI parliamentarians resigned. The standoff continues.

What will happen next is difficult to predict, but most analysts agree Pakistan’s political status quo is about to change. Representatives of Khan’s PTI and Sharif’s PML-N have engaged in on-and-off talks, stalling on Khan’s demand that Sharif resign, even for a period of 30 days, while an independent investigation of the election results is carried out. If no fraud is found, he can return, Khan says. “I would continue to stage sit-ins till Nawaz Sharif tenders his resignation, even if it takes a full year,” Khan told supporters on Aug. 23.

Qadri, meanwhile, has resorted to fiery speeches and bizarre threats, promising chaos if his demands, including justice for 16 of his followers killed by Pakistani police in protests in 2013, are not met. On Aug. 23, an anti-terrorism court issued an arrest warrant for him. Two days later, the preacher waved around a white funeral shroud to his followers. He vowed that he was ready to die a martyr, and that if Sharif did not act within 48 hours, either Qadri’s own dead body or the corpse of a fallen Sharif administration would fill it.

The situation, says Hassan, is heading toward all-out confrontation. “Neither Qadri nor Khan are willing to back down,” he says. “They both see this is as their last chance at credibility. If they fail, they are both finished.”

Sharif and his allies are equally desperate. Calling new elections would be political suicide, according to a recent poll conducted by Pakistan’s respected Herald magazine, in collaboration with the Sustainable Development Policy Institute. Its results show that if elections were held today, Khan’s PTI would win by a wide margin.

Without a doubt, the leaders of the protests have injected some energy into a Pakistani electorate left in a zombie-like daze by the political status quo. To a people aching for change, they offer alternatives to the dynastic rule of Pakistan’s dominant families—the Sharifs, Bhuttos and Chaudhrys—who have traded power between themselves and the military for decades. But some insiders are not convinced that Khan and Qadri represent a new breed of Pakistani politician. What is really playing out here is another reset, they say: a shift in Pakistan’s power balance carefully orchestrated by the military.

According to Iqbal Khattak, Peshawar bureau chief for Pakistan’s Daily Times newspaper, the army’s fingerprints are all over the current standoff. “The army is now back in the driver’s seat,” he says. “I doubt this was all their doing, but they saw an opportunity and took it.”

Sharif’s difficulties with the army have been well documented over the past decade and a half. In 1999, he was ousted from power and jailed by general Pervez Musharraf, then the army chief of staff. Upon his return to power last year, Sharif opened up a treason case against Musharraf, angering the military’s top brass. He then proceeded to pour salt on their wounds by actively taking control of Pakistani foreign policy vis-à-vis Afghanistan and India, as well as Pakistan’s own internal militant threats, advocating for the dialogue that ultimately failed.“All of these issues touch very close to home for the military,” says Khattak. “Now, the generals can tell Sharif: ‘We will protect you, but you have to stay out of our business.’ ”

Whether the generals will continue to play a role remains the dominant question. “Everyone’s asking what they will do,” says Hassan. “In a minute, they can change everything.” In a minute, in fact, anything can change in Pakistan. The pendulum is swinging; where it settles, or even if it will settle, is anyone’s guess.