Canada's government is sending body armour to support Ukraine. So is this group of activist fundraisers. 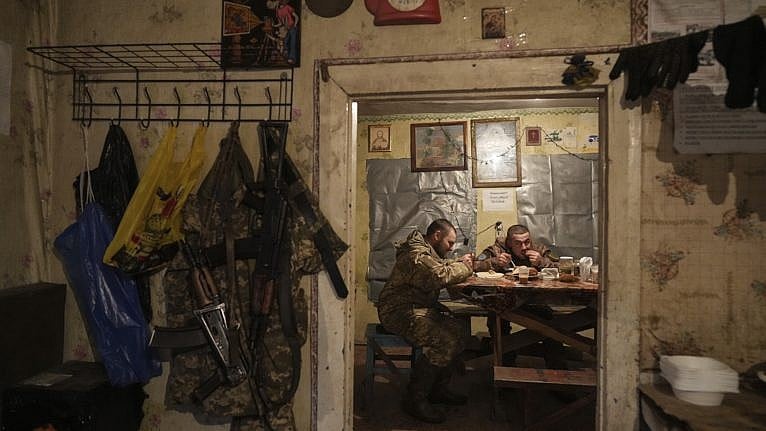 Ukrainian servicemen eating dinner last week after their duty at the frontline near Svitlodarsk, in eastern Ukraine. (Evgeniy Maloletka/AP)

For those who heard news this weeked about Canada’s $25-million shipment to Ukraine of non-lethal equipment and wished they were giving more, Ukrainian-Canadians have set up their own unusual private support option.

Donations have swelled in recent days to the Friends of Ukraine Defence Forces Fund, which buys goggles, helmets, first-aid materials and other gear for the country’s equipment-starved fighters. The fund, established in 2014 by the League of Ukrainian Canadians and League of Ukrainian Canadian Women, raised $1.5 million over the subsequent eight years. Since the recent Russian invasion, it has raised that amount again, and more. (These donations are not eligible for charitable tax credits.)

Maclean’s spoke with Ihor Kozak, a retired member of the Canadian Armed Forces and co-founder of the fund about his group’s contribution to Ukraine’s resistance, and the uncertain road ahead for the country of his birth.

Why was this fund created?

Russian aggression started in Ukraine eight years ago, when Russia annexed Crimea, moved into the Donbas and started the humanitarian crisis there.  At that time, Ukraine was totally unprepared for that war. Ukraine had President Yanukovych, who was working closely with Russia, frankly, to destroy the Ukrainian military to make it easy for Russia to invade. There was literally no proper military equipment in place, the defence spending very little. There was no regard for the military or for the well-being of the Ukrainian personnel or their families, whatsoever.

You had a bunch of mostly kids in running shoes, without helmets,  bulletproof vests or any equipment going to the front lines. We felt that to preserve Ukrainian life, and to save Ukraine, we would fundraise in Canada to provide non-lethal military aid—we will never do weapons or ammunition, because that would be illegal—to dress and equip those Ukrainian soldiers. As the conflict dragged on, Ukraine also had many casualties and war veterans, so we moved toward medical support and support for families.

Now that the war moved again to a more active phase, we once again beef up our capability to do what we can.

First of all, everybody was shocked. But the moment the shock had passed, we realized that we need to do something on a fairly big scale. We saw an influx of funds, calls from people asking “how can we help?” Then we also faced a challenge because, since 2014, we’ve had everything established for the war on the eastern front—supply lines, volunteers. Now, you’re having fighting and bombing right across Ukraine. So we need to reinvent ourselves to be able to support troops all over.  Some drastic changes, but so far we’re doing fairly well.

I can’t imagine it’s easy for a private organization to mail vests and helmets into Kharkiv or Mariupol right now. How are you getting supplies to where they’re needed?

It’s clearly impractical to deliver them from Canada. Our solution has been to work with our contacts, primarily in Poland and other countries in eastern Europe, and Ukrainians in those countries, purchasing the necessary equipment and then shipping it across the border. We have volunteers with whom we’ve worked over the past eight years waiting on the other side of the border, with corridors established. They take over from there, and deliver where it’s required, where they can, obviously risking their lives and working around the clock. We’re just scratching the surface here, but they’re doing what they can.

This reminds me, at least in name, of the Friends of the Israel Defense Forces, which provides purely social and educational supports. Was that an inspiration?

Absolutely. We have been amazed with the resistance the State of Israel has been able to put up to various threats, and how Jews around the world have been about supporting the Israeli Defense Forces. We thought that was a great model. We haven’t mimicked it exactly, because they’re focusing on more mature, established programs. We started from scratch in 2014, but I think it will mature over time too, especially after this massive Russian invasion. There’s going to be so many casualties of war and so many wounded, so many orphans.

Your website says donate $100 for a helmet, $200 for vests, $4,000 for night vision goggles. This overlaps with much of what the Government of Canada has said it’s going to ship to Ukraine. Is this type of military support not stuff for governments to do, as opposed to private individuals?

Ukrainians’ needs are so great now. The president called for the complete mobilization of Ukrainian society. Every man 16 to 60 is being asked to join the military. In Kyiv, they’ve been handing out rifles to anybody willing to take them and fight.  So the entire nation is fighting this war, and most of these people are going into the battlefield without helmets vests or first-aid kits. The need is so great that even with the government support that is coming, there’s a requirement for everybody who can provide help to do so, to save lives.

Secondly, the government is a bureaucracy, and it takes time for the big machine to do things. By the time they start delivering this, it might be a week, two, or months from now. Ukraine needs support now, and we’re doing whatever we can in our small way.

Editor’s note: The itemized donor menu referenced in the question above was removed from the fund’s website before this interview was posted

Sorry, is it your belief your organization can get this equipment faster than the government can?

Well, we’ve been delivering since 2014, and we’ve established connections. We’re buying this in Europe, anyway—now it is just the matter of pouring more money and delivering it across the border. We’re just increasing capacity now.

You’re a former solider, you’ve visited the eastern front several times. How do you feel they’re holding up? How confident are you they can repel the Russian  onslaught?

The Ukrainian side is doing very well, holding up this massive Russian invasion against all odds. Ukrainian forces’ esprit de corps, the morale, is extremely high in comparison to the Russian invaders.

I am hopeful. I am confident in the perseverance and toughness of Ukrainian people. I have no doubt the Ukrainians will not surrender, no matter what. I believe that it’s impossible for President Putin to conquer and hold onto Ukraine. The only questions are at what cost, and what is Ukraine going to look like once it is over?

Where is your family, and are they safe?

We have family in both eastern and western Ukraine. They’re, thank God, alive and safe. Those who are young and strong and can fight, fight, and those who cannot volunteer in supporting roles, preparing meals or working as drivers for logistical services.

There has been some talk of Ukrainians in other parts of the world going back to fight. I don’t know if that’s something you’re inclined to do, given your military background. Do you know people from Canada who want to join the military cause?

This came up just recently, with the president making a call to join an international legion. Ukrainians are outgunned, outnumbered and looking for any help they can. We hope we don’t have to mobilize the entire Ukrainian community, start shipping people over there, because we’re hoping this war will end in the next few days, with all this tremendous international pressure and serious casualties the Russians are sustaining.

If not, all options are on the table. We do whatever we have to do to make sure Ukraine and the free world prevail.