The things that made Macron so refreshing—he's 39, never held elected office before, has no political party—are suddenly the ingredients of a potential nightmare. 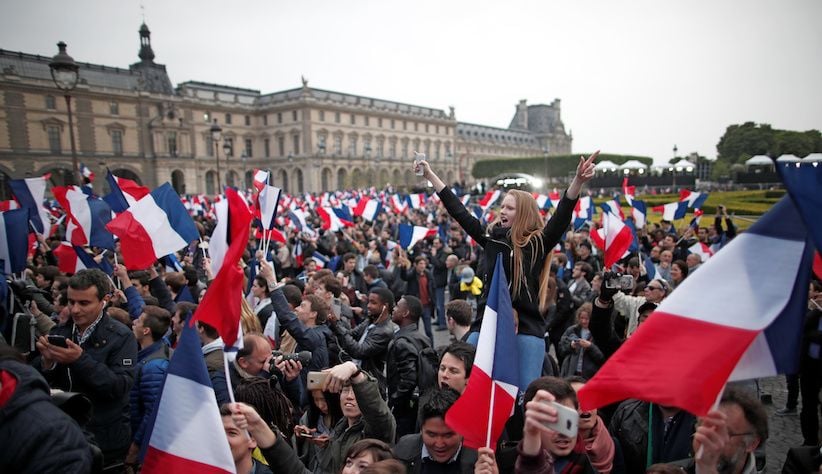 Elements of a victory, followed by predictions and warnings:

1. The pollsters in France called it right. Emmanuel Macron held a slightly-more-than-20-point lead over Marine Le Pen, in the Ifop firm’s hypothetical head-to-head polling, for months. It constricted just a bit after the first-round results two weeks ago made the confrontation real. And then, from May 1, his lead began to widen again. After her terrible performance in the May 3 televised debate—somehow at once triumphalist and bitter—Macron’s momentum increased. Between Thursday and Friday, he gained two points and she lost two in a single day. At that rate, he was on track to win 66 to her 34, and the final results seem to be within a point of that outcome.

2. The astonishing online assault against the Macron campaign flopped completely. The crypto-fascist Twitter legions of the alt-right, who seemed to be much more emotionally invested in this weekend caper than their friends and supporters in the Kremlin, should take this as a severe warning to remember that they need to keep at least one gangrenous toe perched in the real world if they want to have real-world results. Waiting to dump your stuff until a few hours before a news blackout is not helpful because you need the news to amplify your dirt and lies. Massive spamming of Reddit isn’t useful if almost nobody in the country concerned reads Reddit. Stupid hand signals and tactical alliances with YouTube entrepreneurs may impress your deeply troubled friends, but they move zero votes.

3. But the latest alt-right/Kremlin assault against liberal democracy was not a cost-free weekend on Twitter. The would-be disrupters of democracy have tipped their hand, revealed their latest tactics, and given their opponents ammunition to anticipate and counter their next move.

4. The next big confrontation between the forces Marine Le Pen caricatured, in her very short concession speech, as “the patriots and the globalists” will be the elections in Germany in September. This was always, to some extent, a false construct, and especially so in Germany: If Angela Merkel’s centre-right CDU falls, the likely beneficiary will be the centre-left SPD, which from a Trump/Le Pen/UKIP/Wikileaks perspective would be no change at all. But the SPD had a lousy day in regional elections on Sunday, Merkel’s party won, and the far-right AFD had one of its worst results in many months.

5. The nationalist populist right, to use an amorphous and probably too generous term, has had such a lousy 2017 that its successes in 2016 — Brexit and the election of Donald Trump — must be put into perspective. In particular, the much-maligned thesis that Hillary Clinton was simply not a very skilled candidate, despite her c.v., gets a boost as more and more candidates and parties from the roughly Clintonian end of the spectrum live to fight another day.

So much for the big picture. In France, the next few weeks will be very interesting to watch.

Emmanuel Macron is an interesting guy, but all the things that made him so refreshing—he’s 39, he’s never held elected office before, he has no political party—are suddenly the ingredients of a potential nightmare.

France elects presidents and what we would call MPs separately. The legislative elections to pick a new National Assembly are soon, on June 11 and 18. There’s no requirement for the president and the parliamentary majority to be from the same political party, though that phenomenon, called “cohabitation,” is hard to juggle for all concerned. And that’s when a president has a broad and long-standing network of political allies behind him.

Macron has one month to knit together a coalition, loose or elaborate, for the legislatives. Step one, an online form you can fill out if you want to run for Macron’s team in June, is up, so there’s that. Macron can certainly draw from the existing parties. He’ll have to. But the more experienced his troops, the less he’ll look like a “change” president. The less they’re associated with old-line parties, conversely, the higher the likelihood that it’s because at least some of them are flakes. (The first batch of “En Marche!” candidates certainly look full of hope. They include the former head of the elite anti-terrorist French police unit.) The new president will have to figure all this out without the benefit of a lifer’s finely honed political instincts.

Canadians trying to imagine how this will go might want to imagine how it’d go for Bill Morneau, a thoughtful but not notoriously agile import from the private sector, if he somehow managed to get elected prime minister of Canada a month ahead of everyone else, with no Morneau Party to support him. Maybe it’ll go well! Stranger things have happened. As you know.

The job facing Macron is the same that faced Nicolas Sarkozy and François Hollande, the second and third single-term presidents in the history of the Fifth Republic. Make the labour market more flexible. Ensure social programs are sustainable over the long term. Defend and promote the workforce participation of immigrant and minority populations so a childhood in the banlieues is not a life sentence. Clean up the special guild pensions that constitute a conspiracy of state employees against the rest of the labour market. In a hundred ways, at last, simplify French life.

Sarkozy was never more popular than in the early autumn of 2007, when it seemed that he was tackling these problems. His decline matched his failure to make real change. Hollande was elected with a mandate to entrench the status quo. To his credit he tried to change it anyway. The effort was doomed from the start. Macron has a strong mandate as the candidate of a French Republic whose citizens have not given up on its rules or on one another. They only want their country to work better for everyone. Hopes dashed many times are, despite everything, not abandoned.