With the release of Trump Jr.'s emails, the president's floundering administration has suffered a political wound that can't be healed 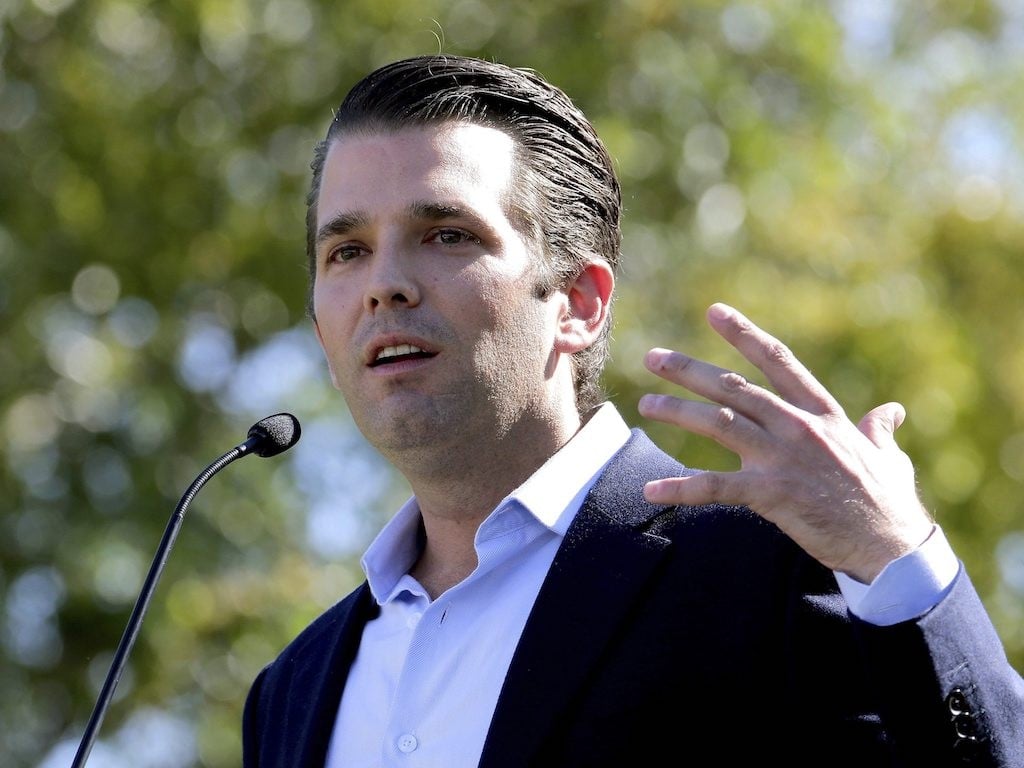 Journalists, historians and political scientists will write about Donald Trump and the Russians for decades. It is a story that is so rich with details, filled with so many unbelievable characters and implausible plot twists, it will be mined for years and years.

The Trump children, in particular, will play prominent roles in these retellings. Ivanka, for example, is almost Shakespearian in this tale—her air of regal presumption echoes mad King Lear’s daughter Goneril. The archetype for Donald Jr., however, can’t be found in an Elizabethan drama. His combination of blustering arrogance and hapless stupidity is more modern—imagine the bullying villain wearing a pink Lacoste shirt (collar popped) in a John Hughes film who ends up with a bloody nose in the final act. Today, Donald Jr. earned himself his very own chapter in these future books; a chapter entitled “The e-mail”.

For months, the Trump team denied any interaction with the Russians. Then, one by one, they recanted and admitted to a long list of encounters and contacts. Donald Jr.’s turn came this week, when he first denied having met with any Russians, then admitted to meeting one at Trump Tower last June. But, Donald Jr. argued, he only did so as a favour for a friend (even though he chose to bring along the two most important people in the campaign: then-candidate Trump’s campaign manager Paul Manafort, and son-in-law Jared Kushner).

Then Donald Jr. claimed they only talked about adoption issues. This story changed quickly yet again, and soon he admitted that sanctions were indeed discussed. Shortly after that, he conceded that he had been offered damaging information on Trump’s political rival Hillary Clinton, but there was nothing wrong with that, he blustered.

Finally, in an apparent attempt to get ahead of the story, Donald Jr. released the original email chain that led to the meeting. In it a Moscow friend whose family was well-connected to the Kremlin offered to arrange a meeting with a “Russian government attorney” who had “very high level and sensitive information” that would incriminate Clinton and that was part of “Russia and its government’s support for Mr. Trump”. Donald Jr. immediately responded by saying, “If it’s what you say I love it.” The meeting took place six days later.

This, finally, after months of leaks, theories and speculation, is the proverbial smoking gun. President Trump’s son, his campaign manager and his most trusted advisor met with someone they believed to be a Russian government official who wanted to help their campaign by providing confidential information on his opponent. A shorter description of this is “illegal collusion with a foreign government”. Or, as Jens David Ohlin, the associate dean of Cornell Law School, describes it: “a shocking admission of a criminal conspiracy” to commit election fraud.

There are only dark times ahead for the 45th president of the United States. He might be able to distance himself from Manafort, but not his son-in-law, and not his own namesake. The operating assumption now, both for the media and for special counsel Robert Mueller (who is already investigating the president for obstruction of justice related to the Russia scandal), is that Trump at the very least knew about this collusion, and quite likely played an active role.

RELATED: Trump talks to Putin. What could go wrong?

The Mueller investigation, the parallel congressional hearings, and the increasingly effective inquiries of the New York Times and the Washington Post, will only grow louder and larger, crowding out his agenda and overshadowing any of his messages. Twitter rants will not make this go away.

In recent weeks Republican officials had already begun to edge away from the president. He has been unable to get them to approve most of his appointments or to rally around new healthcare legislation to replace the hated Obamacare. His proposed joint cyber-security unit with Moscow was greeted with dismay and derision from his own party. The release of Donald Jr.’s email will make it not only easier for them to distance themselves from one of the most unpopular presidents in modern history, but possibly obligatory. At this point, it seems all but impossible for the president to rescue his approval numbers or implement his agenda.

Last week, Trump led an administration that was under-staffed and chaotic—unable to deliver on any of his more significant campaign promises. The revelations in his son’s email would cripple even the most robust presidency. For Trump, even if this does not lead to impeachment, is likely a fatal political wound putting his White House into palliative care for the remainder of the term. And, if it isn’t, if Trump does manage to shake this off and move forward, that would mark the effective end to the rules and norms that have governed United States politics for the last century.