Donald Trump has no foreign policy experience. What will that mean on the world stage? 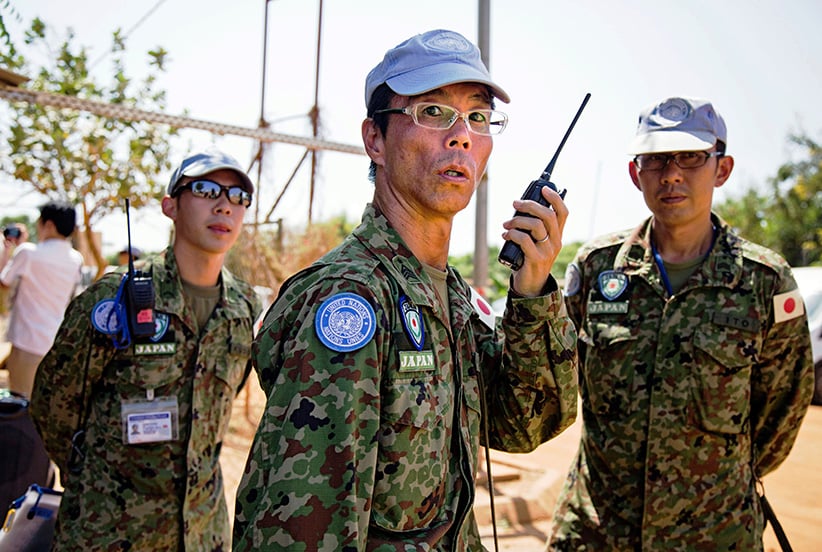 The historic irony of Donald Trump may be that the American president with the least amount of foreign policy acumen may nonetheless have the greatest impact on global affairs since Franklin Roosevelt.

Trump is not a cypher. He doesn’t keep his opinions, his insecurities, and his ignorance close to the chest—he tapes all of it to his forehead. The president-elect has promised again and again he will pull America back from traditional alliances, align with traditional antagonists, and kick the multilateral order in the shins every chance he gets.

This isolationist agenda is supported by the shabby collection of also-rans, never-beens, and outcasts who have been stealing into Trump Tower. While Republicans in Congress may lean toward a more traditional global role for the United States, this is one file where a president enjoys almost complete authority. Trump may already be backpedalling from other policy pledges, like building a wall or locking up Hillary Clinton, but there is no reason to hope that, internationally, Trump won’t do exactly what he promised.

The major foreign powers evidently came to this conclusion quickly and are already moving. The resulting shifts in the global balance of power are happening so quickly and in so many places at once, it’s difficult to keep track.

MORE: The rise of realpolitik—and the strongman

Let’s start in midtown Manhattan. The United Nations may be one of the earliest victims of the Trump presidency. The organization is still recovering from the damage done by John Bolton as George W. Bush’s short-lived ambassador to the UN. Bolton found hundreds of ways to undermine the effectiveness and legitimacy of the organization and the entire multilateral system. Not surprisingly, he is now helping Trump, who is promising to cut funding and collaboration, either of which could be all but fatal to an already struggling organization.

More obvious shifts can be seen in Eastern Europe. Trump’s repeated praise for Vladimir Putin so emboldened the Russian dictator he was willing to risk interfering in the American election. Having gotten away with it, Russian officials are now boasting about it openly, and will undoubtedly do the same in other Western nations, including this one. Having pushed back the boundaries of what is acceptable in cyberwarfare, Russia will now be able to dramatically strengthen its strategic power with relatively little actual cost.

Russia’s self-defined sphere of influence won’t just expand in the digital world. We are already seeing a more aggressive posture in Syria. In the Baltics, governments are increasingly worried about Russian intervention, to the point that Estonia is training its population on how to conduct guerrilla operations in the wake of an invasion. In Turkey, it is hard to imagine Trump trying to court the Islamic government as it continues to turn toward Moscow.

This means more refugees in Europe. With Russia and Syria unhindered, the war will continue and it will likely go poorly for the rebels. Turkey’s unwillingness to stop refugees flowing toward Europe will continue. And more Syrians on the streets of Paris and Berlin will be bad news for liberal politicians like Angela Merkel, and good news for right-wing demagogues like Marine Le Pen.

But power in Western Europe has already begun to shift in different ways. NATO’s role as the guarantor of 70 years of continental peace is no longer certain. Trump is calling for fewer troops overseas, and has mocked the bedrock doctrine of mutual defence. This alone means America’s pre-eminent role in the alliance has effectively ended. No one is entirely sure the U.S. can be counted on. Given the stakes, other member states are understandably looking to Germany to move into the leadership vacuum.

It is almost inevitable that Europe (and Canada) will feel obligated to increase their own level of military spending and readiness, if not because Washington is explicitly demanding it, because they no longer know if American forces will be there when needed. And if you have troops, you tend to use them. So a better-armed European Union may be more willing to unilaterally intervene overseas in peacekeeping or peacemaking roles. When the next crisis boils over in Africa or the Middle East, global eyes may turn to Brussels, not Washington.

In the United Kingdom, Brexiteers are heartened by the Trump victory, and expect the populist president to re-emphasize the legendary transatlantic “special relationship” that has faded over the last few decades. Even though one of Trump’s first gaffes was to propose his accomplice Nigel Farage as the new British ambassador to the United States, there is no question this transatlantic partnership is going to become more relevant in both Washington and London and, as a result, pull the United Kingdom further away from Europe. 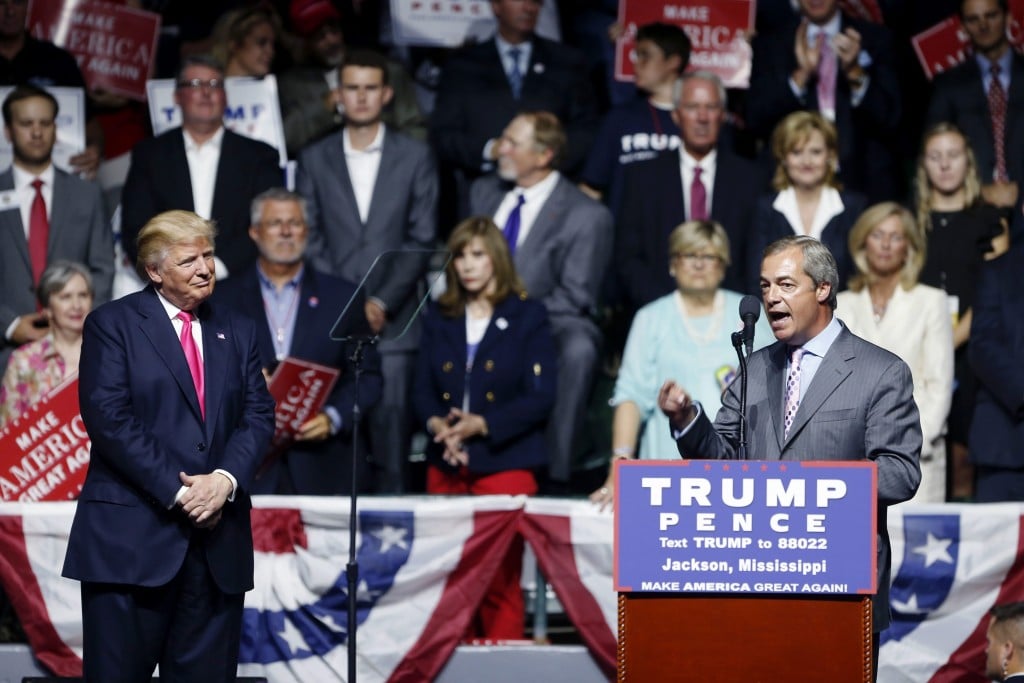 The biggest tectonic shifts, however, are beginning to take place in the Asia Pacific. Trump has emphatically reaffirmed his intention to withdraw from the Trans-Pacific Partnership, leaving the deal “meaningless,” in the words of Japanese Prime Minister Shinzo Abe. Enter China, stage right, with their own trade alliance proposal, the Regional Comprehensive Economic Partnership (RCEP). This trade pact conveniently excludes the United States, giving Beijing an uncontested position as the main economic hegemon in the eastern Pacific.

China may be the biggest winner in a world rearranged by Trump. The South China Sea dispute is effectively over, especially in light of the new Philippine president’s shift toward Beijing. Beijing is also stepping into the leadership vacuum as Trump walks away from global efforts to limit climate change. Trump promises to use his first day in office to cut all the American funding that was meant to help developing nations shift to low-carbon economies. China will be delighted to pay that bill, giving them the global lead on an issue that is supported by every single national leader on the planet, except one: Trump.

Even if Trump endorses American military guarantees for traditional Asian allies like Taiwan and South Korea, these countries will be unwilling to entirely believe him. Fittingly, this week Japan deployed armed troops to South Sudan, their first combat mission since the Second World War. Expect to see a lot more of that. Even Australia is getting nervous and looking to shift its alliances. In Canberra, defence analysts and politicians acknowledged the American election results have “serious ramifications” for their security interests and they may now need to seek a rapprochement with China. Like Europe, we can expect these countries to increase the money they spend on the military, and reduce the attention they pay to Washington. By contrast, when Beijing speaks, they will have to listen more closely than they have in the past.

These are just some of the changes to the global balance of power that have emerged and Trump is not even in office yet. The incredible irony of his Make America Great Again campaign is that it will almost certainly make America far less important in the world everywhere. China is already moving into the leadership vacuum, as is Germany. Russia will now inflate its importance even further. The new multipolar world, one not seen since the 1930s, will be more unpredictable, more volatile, and more accident-prone than ever.

All of this presents a historic opportunity for Ottawa. For generations Canadian diplomats and politicians have tried, with varying degrees of enthusiasm, to wean the country off its economic dependence on the United States. Trump’s arrival may mean this is no longer a choice, but a necessity. This could be the shock we needed to genuinely commit to an Asian strategy, closer economic links to Mexico, Central and South America, and to Europe. Britain will be looking for a stronger transatlantic relationship with Canada, too. The unexpected consequence of president Trump may be that Canada finally leaves the North American nest to make its own way in the world. Wilfrid Laurier would be delighted.