Donald Trump jabs on trade, China counterpunches and the world freaks out

With the world's two biggest superpowers hurtling towards a trade war, here's a roundup of what all sides are saying 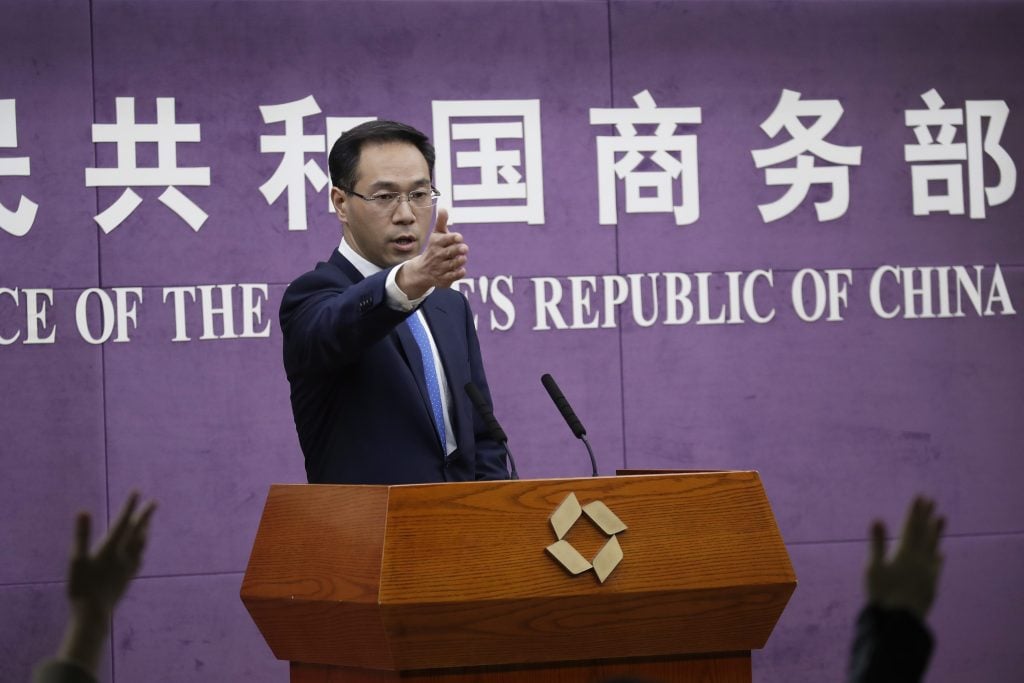 First it was the U.S. with tariffs on  a list of roughly 1,300 Chinese goods worth US$50 billion annually.

Then China’s response with  tariffs on US$50 billion worth of American goods, including soybeans, the U.S.’s largest agricultural export to China.

That was followed by Thursday’s late statement that U.S. President Donald Trump is mulling new tariffs on a further US$100 billion worth of annual imports from China.

Financial markets have grown increasingly concerned that the trade dispute would escalate into a full-blown trade war. Stocks have sold off sharply, escalating Friday after China came back with firm words to what it termed “arrogant” U.S. posture. The Dow Jones Industrial average tumbled as much as 762 points on Friday, before rallying a bit to close down 572 points, or 2.3 per cent.

Here is what China said:

“The result of this behavior is to smash your own foot with a stone. If the United States announces an additional $100 billion list of tariffs, China has already fully prepared, and will not hesitate to immediately make, a fierce counter strike.”

“We will not exclude any option. The Chinese way of doing things is like this: We do not pick a fight, but if someone does pick a fight, we will fight resolutely. The Chinese have always been very serious in handling these matters. We mean what we say. We do not want to fight, but we are not afraid to fight a trade war.” – China’s Commerce Ministry spokesman, Gao Feng, in a statement and in comments to reporters.

And here is the White House assuring U.S. citizens it has negotiations in hand

“This is not a trade war. There is no war here” … “Don’t overreact, we’ll see how this works out. My view is, look, I’m a growth guy, I’m a Reagan supply-side growth guy. I think at the end of this whole process, the end of the rainbow, there’s a pot of gold.” – National Economic Council Director Larry Kudlow, on Friday and in comments from earlier in the week. Kudlow is becoming the face of Trump’s trade policy but told reporters Friday he only learned about latest proposed tariffs Thursday night, which suggests Trump is calling his own shots.

“I’m cautiously optimistic that we will be able to work this out. There is the potential of a trade war.” – Stephen Mnuchin, Trump’s Treasury Secretary, seemingly rattling sabres while not mentioning pots of gold.

Grumbling from Trump’s Republican colleagues in the U.S. heartland

“Hopefully the president is just blowing off steam again but, if he’s even half-serious, this is nuts. China is guilty of many things, but the president has no actual plan to win right now. He’s threatening to light American agriculture on fire. Let’s absolutely take on Chinese bad behavior, but with a plan that punishes them instead of us. This is the dumbest possible way to do this.” – Nebraska Republican Senator Ben Sasse in a statement.

“Farmers and ranchers shouldn’t be expected to bear the brunt of retaliation for the entire country.” – Senator  Chuck Grassley of Iowa, and a noted Trump ally.

“Concerns about potential NAFTA abrogation in the spring and summer months should not be mistaken given that this is all up to the whim of an increasingly erratic chief executive who has carte blanche from a non-existent board of directors.” – Chris Krueger, an analyst at Cowen Washington Research Group

“Wage and price pressures are mounting.  Higher tariffs would only intensify these pressures and cost American jobs. Trump’s tariff gambit better end up in avoiding higher tariffs or they will only add to the overheating risks that are high and rising.” – Moody’s chief economist Mark Zandi

“The signal is clear: China will not be pushed into concessions, and is willing to accept some economic pain in what Beijing may ultimately see as a political dispute.” – Mark Cliffe, analyst at ING Bank

“While the U.S. has legitimate complaints about China’s treatment of [intellectual property], by responding with trade sanctions it has allowed China to present the U.S. as the trade aggressor. A better approach would have been to take action through investment and patent rules.” – Simon Baptist, Asia managing director and chief economist at the Economist Intelligence Unit

READ: Is Trump playing his trade war a lot more smartly than we think?

But at least one analyst thinks Trump might “outsmart us all”

“The American president is playing a dangerous game but a potentially rewarding one for the U.S. If Trump succeeds in getting more favourable terms of trade from his trading partners, along with perhaps relief on his defence budget, he will emerge as the winner in the noisiest trade quarrel the world has seen in the last couple of decades. This would get him in the voters’ good books in the run-up to the midterm elections in the US.. in November.” – Raoul Leering, head of international trade analysis, ING  in the Netherlands