Scott Gilmore: Trump cancelling his trip to Britain is a watershed moment, marking a sad decline of the 'Special Relationship' and American power 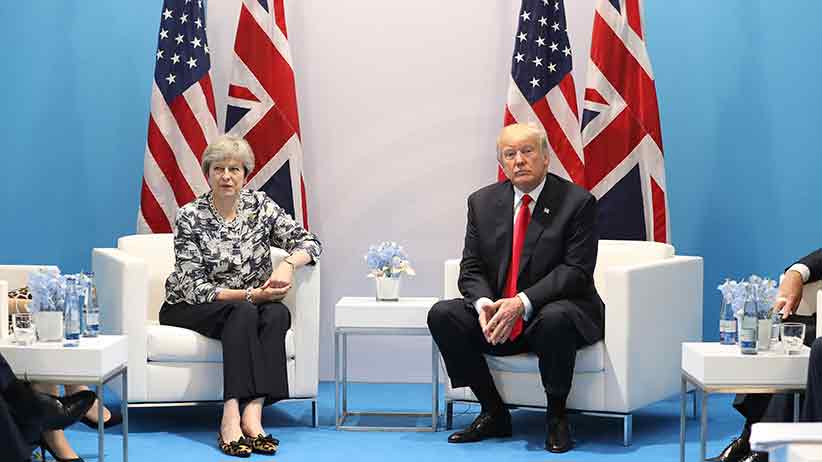 What has been the most important country-to-country alliance of the last 200 years? You might say the Soviet Union and Nazi Germany. But for all the ensuing carnage that unleashed, its duration could be measured in months.

There was the Moscow and Beijing alliance that helped define the Cold War. But that was off and on, and it was never quite clear if they were really on the same side.

The Canadian at the back of the class eagerly waving his hand wants to talk about the “world’s longest undefended border and largest trading relationship,” but neither of those facts are still true and the Ottawa-Washington nexus has very little influence beyond North America.

I would argue that the British-American alliance has been, by far, the most important bilateral relationship in the world for at least the last century. America sprung from Britain and even two direct wars never pushed Washington to cut those strong cultural and strategic ties. The direct ties between presidents and prime ministers dictated the outcome of the both the First and Second World Wars.

America’s strong influence accelerated Britain’s decolonization, remapping the entire world. Whitehall and the White House provided the bedrock upon which NATO was built. London’s Atlantic tendencies allowed it to always keep one foot outside of the EU. And together, the two nations fought the Cold War almost hand in hand.

Their alliance is even referred to in short hand as the “Special Relationship,” capitalized as a unique thing. And this relationship has typically been embodied in the necessary but nonetheless seemingly natural close personal relationship between the president and the prime minister.

When you think about this trans-Atlantic alliance, the image that most likely springs to mind is that of Margaret Thatcher and Ronald Reagan, laughing together. But now, even after last year’s polite meeting between Prime Minister Theresa May and President Trump, when she appeared to steady his descent down a step by holding his hand, the idea of Downing Street and the Oval Office as natural allies seems like a quaint anachronism.

The Trump presidency is an endless snowstorm of distractions. There is a constant white-out of outrages, faux pas, errors and scandals. The wind blows in every direction and the lead story changes on an hourly basis. CNN now maintains a “Trump Live Updates” feed as though this was an unfolding natural disaster (which I suppose at this point we can acknowledge it is).

Consider just yesterday. The day began with a tweet from the president condemning one of his own key pieces of legislation that was about to be voted on, sending his party into chaos. A group of former nuclear launch officers wrote an open letter to Congress calling the president a “clear and present danger to the country.” Trump gave an incoherent interview to the Wall Street Journal—when asked about his feud with former Svengali Stephen Bannon, he rambled on for several minutes about his record in college sports among other things. A poll showed Oprah Winfrey already enjoys a double-digit lead in the polls, and she hasn’t even admitted she wants to run yet. In a meeting with legislators, the president derided the idea that America should accept immigrants from Africa, a “shithole.” And then the day closed with news Trump had just cancelled his long-delayed trip to London.

Understandably, that last one was lost in the blizzard of chyron news flashes. Which is unfortunate, because it may be the most momentous event of the week, and it marks a significant milestone in the historic transformation of America’s role in the world.

The president claimed it was because he was unhappy with President Barack Obama’s decision to move the U.S. Embassy to a less central location. (That was, in fact, former president George W. Bush’s decision.) But sources in both Washington and London claimed the decision was made because Trump wanted to avoid the unfriendly reception he would get from both British officials and the public.

This is undoubtedly the truth. Trump has openly feuded with the Mayor of London. British activists have long been promising massive protests. Downing Street had already downgraded the visit, to avoid inflicting Trump on the Queen, it was rumoured. May was likely unenthusiastic and relieved at the cancellation; not only is the president highly unpopular, but he is not especially useful.

The links between London and Washington have rarely been this weak. They are no longer lined up on European security, NATO, cyber attacks, the Middle East, Iran, North Korea, climate change, the United Nations or multilateralism in general. This list could go on.

And these points of tension are not just limited to Britain. For all of Washington’s traditional allies, from Japan to Germany, it is getting harder and harder to find common ground. It has been noted by many diplomatic observers that Trump’s strategy of “America First” has proven to simply mean “America alone”.

The United States is withdrawing into itself. It is seen as increasingly unreliable. In many cases, Washington is actively working against the priorities of once close friends. And the dual facts that the president had to cancel his trip to Britain because he was unwelcome, and that this decision barely generated news, is yet more proof that the days of the Special Relationship may be over, and with it the American Century.