EU on Brexit exit clause: No talks until Article 50 is invoked

EU lawmakers tell UK: If you're leaving, get moving 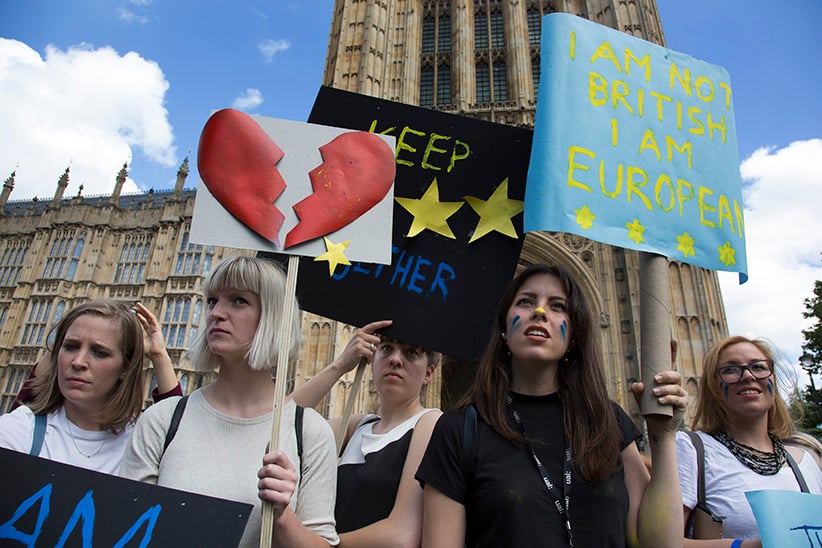 Protesters gather at College Green in Westminster outside the Houses of Parliamant following a Leave vote. (Mike Kemp/In Pictures/Getty Images)

BRUSSELS — Indignant European Union lawmakers pressed Britain to end the uncertainty that has gripped European and global markets, saying Tuesday that if it intends to leave, it should start the process immediately.

Prime Minister David Cameron entered talks with European Commission President Jean-Claude Juncker hours ahead of an EU summit which is expected to hear from the British leaders that exit talks might not be launched before October. Cameron has said he wants informal talks on what comes next before that happens.

Juncker and other European leaders insisted they won’t begin any talks until Britain invokes the EU Constitution’s Article 50, which sets in motion a two-year process to split.

Related reading: What is Article 50?

In an unprecedented emergency session of the EU parliament, called after Britain voted Thursday to leave the union, EU Commission President Jean-Claude Juncker demanded that Britain clarify its future.

“I want the U.K. to clarify its position. Not today, not tomorrow at 9 a.m., but soon,” he told lawmakers. “We cannot allow ourselves to remain in a prolonged period of uncertainty.”

Juncker said he had banned his policy commissioners from holding any secret talks with Britain on its future until London triggers the exit clause.

“No notification. No negotiation,” he said to resounding applause.

Nigel Farage, a British member of the European Parliament and a leader in the “leave” movement, was booed and jeered when he urged Europe to give Britain a good trade deal when it leaves, saying jobs in Germany’s auto sector might be at stake if it doesn’t.

“Why don’t we just be pragmatic, sensible, grown-up, reasonable … and cut a sensible tariff-free deal?” he asked.

In a speech interrupted several times due to the noise, Farage warned: “The UK will not be the last member state to leave the European Union.”

Bearing out his words, French far-right leader Marine Le Pen called the British vote “an extraordinary victory for democracy — a slap for a European system based more and more on fear, blackmail and lies.”

German Chancellor Angela Merkel said she will use “all her strength” to prevent the EU from drifting apart. She and other EU leaders were beginning a two-day summit later Tuesday to hear Cameron’s position and chart the way forward.

Britain’s “leave” leaders hope that the nation can still enjoy many perks of the EU internal market for business, while being able to deny EU citizens entry to Britain to address concerns about immigration that were a key factor in the vote. Merkel, head of the EU’s biggest economy, made clear that isn’t an option.

In an address to the German Parliament before heading to Brussels, Merkel said she expects that Britain will want to maintain “close relations” with the EU once it leaves, but warned it cannot expect a business-as-usual approach.

“Whoever wants to leave this family cannot expect to have no more obligations but to keep privileges,” she said. “We will ensure that the negotiations are not carried out with the principle of cherry picking.”

She and other leaders joined Juncker in saying there can be no talks with Britain until it starts the formal procedure to leave.

Lawmakers paid tribute to Britain’s commissioner in Brussels, Jonathan Hill, who resigned after last week’s vote. He wept in the parliament Tuesday as he received a standing ovation.