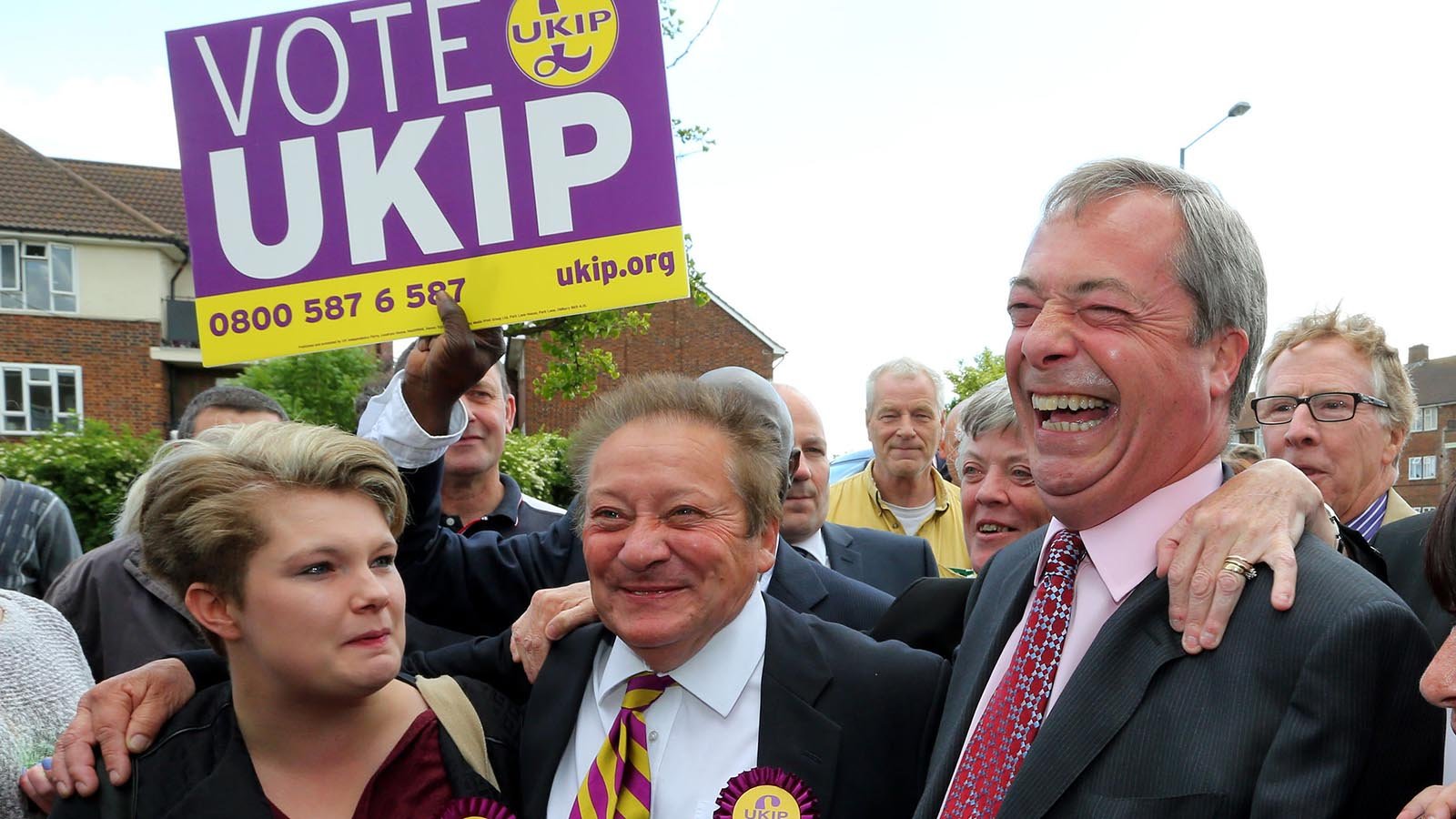 Reeling from the results of European parliamentary elections in which the far-right, anti-European Union and anti-immigration Front National won a leading 25 per cent of the vote, French Socialist Prime Minister Manuel Valls struggled to find words to convey the severity of what had occurred. He settled on “a shock, an earthquake.” French President François Hollande was equally gloomy. “The European elections have delivered their truth, and it’s painful,” he said, and promptly convened an emergency meeting with top government ministers to discuss the calamity.

A dark mood settled over other European capitals, where similarly Euroskeptic parties of both the left and right did well. British Prime Minister David Cameron, more reserved than his French colleague, said the EU could not “shrug off these results and carry on as before. We need to change.”

He was reacting to the success of the U.K. Independence Party (UKIP), which favours the country’s withdrawal from the EU and easily overtook Britain’s three mainstream political parties to win a plurality of more than 27 per cent of the vote. “It is an earthquake for British politics,” said UKIP Leader Nigel Farage, echoing the French prime minister’s choice of words.

In Greece, the fascist Golden Dawn party, which barely registered in the 2009 election, soared to more than nine per cent of the popular vote, winning three of Greece’s 21 seats in the European Parliament.

Across the continent, the most hard-edged, anti-European parties have almost doubled their support since 2009, and now control some 100 out of 751 seats in the European Parliament. Euroskepticism, once easily dismissed as a fading political force, has forced itself into the conversation about Europe’s future. Political parties that seem to belong to a more radical and polarized period of Europe’s history are growing in strength.

On the surface, it’s enough to cause tremors in Brussels. But the forces at work are less revolutionary than they might seem. The earthquake description is accurate only if you equate the stability of France—or indeed the entire European Union—with the willingness of the minority of French voters who actually cast a ballot in these elections to support the floundering Socialist Party or its scandal-plagued mainstream rival, the centre-right Union pour un Mouvement Populaire (UMP). Europe is not falling to fascism. The EU is not on the verge of collapse: More than two-thirds of newly elected members of the European Parliament belong to parties that are broadly pro-European. And not all the Euroskeptics outright oppose the union; some just want to change it.

What has occurred is a shift in the way many European voters view both the EU and, perhaps as important, the domestic political forces that have governed their lives for decades. There is a growing discontent with the EU and traditional political parties that stems in part from frustration with globalization and the enormous changes Europe has undergone in recent decades, says Anton La Guardia, journalist for The
Economist and co-author, with John Peet, of the recently published Unhappy Union: How the Euro Crisis—and Europe—Can Be Fixed.

The EU grew out of the horrors of Europe’s two world wars. By politically and economically binding Europe’s traditional adversaries, it was thought another cataclysm could be avoided. This rationale has faded from the minds of most Europeans, while at the same time the EU has expanded and evolved. Immigration, which accelerated as a result of the expanding EU’s open borders, has changed the demographics of many countries. The Front National in France has thrived on the anxiety these changes have caused—especially the influx of Muslim migrants. Front National Leader Marine Le Pen once likened Muslims praying in the streets to the Nazi occupation of France during the Second World War.

The freer movement of workers has increased competitiveness and in some cases driven down wages. Many Europeans feel they have been left behind by a political transformation over which they had little control. “They are rejecting immigration, but they are also rejecting that open, global world,” says Bruno Cautrès, a researcher at L’Institut d’études politiques de Paris (Sciences Po), describing supporters of France’s Front National. He might just as easily have been talking about the supporters of populist, anti-immigration parties elsewhere in the EU.

This anger and cynicism has been deepened by the eurozone crisis that erupted in 2009 and left millions devastated by high unemployment and the adoption of austerity measures aimed at taming escalating levels of debt. Many are angry at the EU, which seems both controlling and impervious to their genuine desires, and they no longer trust traditional mainstream parties to improve their lives. “One of the problems for [the European Union] is that its main rationale was peace and prosperity,” says Tim Bale, a professor of politics at Queen Mary University of London. “People now take peace for granted. And it hasn’t been able to deliver—at least not in the last two or three years—prosperity.”

The European elections presented voters with an opportunity to voice this anger in a forum in which frustrations can be amplified. Voter turnout is reliably low. Across the union, barely 43 per cent of eligible voters did so this year, and in Britain turnout was only 36 per cent. Those who do show up are often motivated to change the status quo. There is also a tendency among some voters during European elections to support more radical politicians whom they wouldn’t want running their own country’s legislature. “These are not national elections. You could say, ‘Let’s give this smaller party a shot, or give this more extreme party a shot,’ ” says Steven Van Hauwaert, a research fellow at Université catholique de Louvain in Belgium who studies the far right.

But the impact of these more radical parties will be limited in the European Parliament. Even combined, they make up a small minority, and they are unlikely to form a unified block. The UKIP, for example, is uninterested in working with the Front National, which turns up its nose at Golden Dawn and Hungary’s fascist Jobbik party. The populist parties may draw a disproportionate amount of attention, but they will struggle to advance their agendas within Parliament—which in any case lacks the ability to introduce new legislation (a task reserved for other branches of EU government).

The more immediate repercussions may be felt domestically. Tony Travers, a professor of government at the London School of Economics and Political Science, notes that in the 1955 national election, Britain’s two main parties, Labour and the Conservatives, combined to earn more than 96 per cent of the popular vote. In the 2010 national election, that had dropped to 65 per cent, and in the just-passed European elections, the two parties were scorned by more than half of British voters. “There is no question that those parties are in decline,” says Travers.

The UKIP’s share of the vote, on the other hand, has been steadily growing. Britain’s first-past-the-post electoral system means the UKIP faces a difficult task in actually electing members of Parliament, but it has already forced its more mainstream rivals to treat some of its pet issues, such as immigration and the EU, as legitimate concerns. The UKIP’s domination of the European elections in Britain may intensify this process—possibly to the detriment of parties that adopt planks from the UKIP’s platform.

“My concern for the Conservatives is that they will do the obvious thing, which is to harden up their policies on immigration and the European Union,” says Bale. “But that would probably be the wrong thing because that means issues that play very well for the UKIP will be at the top of people’s heads and the top of the media agenda as we go into the general election.”

Hollande has until now advanced relatively centrist economic policies. He may be tempted to steer toward the populist left in an effort to draw support away from the Front National. The centre-right UMP must guard its right flank against inroads by the Front National on issues such as immigration, law and order and French identity. “If the UMP goes to the centre, they are opening a huge opportunity for the Front National to absorb the right-wing electorate,” says Cautrès.

Britain’s Cameron has already promised to renegotiate Britain’s membership in the EU after the 2015 general election, and then hold an in-or-out referendum. He has made it clear he believes Britain is stronger within the European Union than outside it, but the UKIP’s strong showing will likely reinforce his conviction that he needs to show voters he’s fighting for a better deal, and offering them a choice. This tactic also has its risks.

“The other members of the European Union don’t want anyone to get a free ride, and it’s difficult to see why they would necessarily grant Britain any really substantive opt-outs or additional measures that they themselves couldn’t take advantage of,” says Bale.

Cameron might then find himself campaigning for Britain’s continued membership without having secured more attractive terms for the union. Most analysts say Britain’s exit would still be improbable but not impossible. Cameron will likely try to mitigate this risk by seeking support from other countries for more general reforms to the union. The challenge here is that substantial reforms may trigger a treaty change, which in turn may require national referenda to approve it.

Certain reforms to the European Union would improve and protect it, says La Guardia. He argues that within the eurozone—which consists of those countries that share a common currency—more federalism in the form of joint debt and joint bonds is desirable. The goal would be to create a more stable financial system that could survive a member defaulting, and remove the need for bailouts.

“Let them make their mistakes,” he says of fiscally irresponsible member states. “If they want to vote for crazy left-wing policies or crazy right-wing policies, they’ll be punished by the market, they’ll default, and they won’t do it again.”

But in other areas, such as health and safety regulations or agricultural policy, the EU should step back. “If you want to pay farmers to live on the land because you think cows are pretty, that should come out of national budgets. If you want to turn it all into a car park, that’s your national prerogative,” he says. “The problem is that when you go through the things that it could do less of, there’s always somebody who says, ‘No, wait a minute, we want it to do that.’ Because the EU is a series of interlocking bargains.”

It’s a series of bargains for which a growing number of Europeans have waning enthusiasm. But this group is still a minority. For all its flaws, the EU has helped consolidate peace in Europe, it has been a force for economic liberalism and it has reinforced the transition from Communist dictatorship to democracy among new member states in central and eastern Europe.

Such benefits might be most clearly appreciated from the outside, by those who can compare their own lives and opportunities with those of EU citizens. This is why other countries still clamour to join the EU. It’s why activists in Kyiv’s Independence Square flew the flag of the European Union during their deadly standoff with Ukrainian state security forces earlier this year—a gesture, notes La Guardia, that people in the EU don’t make very often.

Euroskeptic party members likely don’t understand this jealous affection. Were they ever to succeed in pulling their countries out of the European Union, they might learn.