Sandy Hook was supposed to be a turning point, leading to real gun control and a reduction in attacks on school children. Neither came to pass. 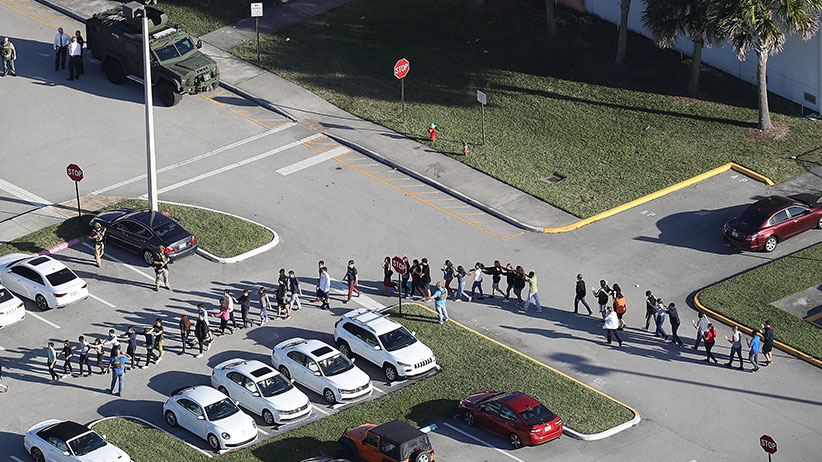 People are brought out of the Marjory Stoneman Douglas High School in Parkland, Fla. after Wednesday’s shooting (Photo by Joe Raedle/Getty Images)

There are two constants after any mass shooting in the United States: an offering of “thoughts and prayers” from political leaders and a constant flow of data meant to sway public opinion, the hope being that—this time—policy makers will finally do something to address the country’s gun laws.

The cycle started to repeat itself again yesterday. At least 17 people, including teenagers and adults, are dead after a former student of Marjory Stoneman Douglas High School in Parkland, Fla. allegedly pulled a fire alarm and opened fire on the students and teachers as they flooded into the hallways.

As American media update their charts from the country’s previous mass shooting—which is never all that long ago—there is no shortage of data to help pinpoint where the nation’s pathologies lie.

The Parkland tragedy marked the 18th school shooting in America this year alone, and it’s only mid-February. No wonder the news site Quartz opted to use one chart to explain the “normalization of U.S. school shootings.”

The normalization of America's school shootings, in one chart https://t.co/8RH9ks6a1N @QZ pic.twitter.com/3hE5N3Ms4b

Since September 2014, America has only had one month (Feb. 2017) when no person was either injured or killed in a school shooting, according to the New York Times, using data from the non-profit Gun Violence Archive.

A sad, but very telling story on gun violence here in the U.S. This graphic is tough to stomach. https://t.co/bKSPotzIWB pic.twitter.com/oHDcJgirRh

And since the Sandy Hook Elementary School shooting in Connecticut from December 2012—when 20 children, all aged six or seven, plus another six adults were killed—a total of 430 people have been shot in nearly 300 American school shootings.

After Sandy Hook, More Than 430 People Have Been Shot in 273 School Shootings:

“The data used here is from the Gun Violence Archive, a nonprofit that began tracking school shootings in 2014, about a year after Sandy Hook.”https://t.co/luP2gdeu27 (via @nytimes) pic.twitter.com/OssErpLeG9

The problem isn’t just what’s happening in schools. It’s shootings altogether. While at least 17 people were killed in Parkland on Valentine’s Day, another 1,789 people have died from gun violence in America just this year.

When the President addressed the nation Thursday, the news site Vox pointed out how Trump didn’t mention one potential cause: America’s stockpile of firearms. 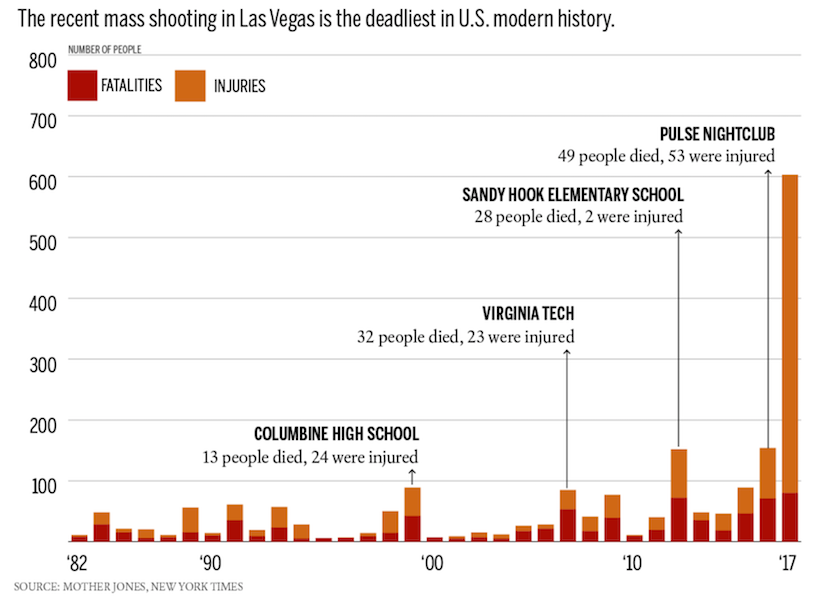 2017 is the deadliest year for mass shootings in U.S. modern history

There are an estimated 650 million guns owned by civilians in the entire world, CNN points out. About half of them (48 per cent) belong to Americans. It should come as no shock that when gun ownership data by country is looked at per capita, no other country comes remotely close to America. As of 2007, there were 89 guns for every 100 Americans. The next closest? Strife-torn Yemen, with 55 guns per 100 citizens.

It’s getting tougher to avoid the correlation between gun ownership and gun-related deaths.

Trump claimed over Twitter there were signs the alleged Parkland shooter is “mentally disturbed.” Yet less than six weeks into his presidency, Trump himself signed a bill that made it easier for folks with mental illnesses to buy guns without background checks.

So many signs that the Florida shooter was mentally disturbed, even expelled from school for bad and erratic behavior. Neighbors and classmates knew he was a big problem. Must always report such instances to authorities, again and again!

And while Americans might worry about an illegal gun culture in the country only to stock up on firearms themselves for protection, the vast majority of mass shooters from 1982-2012 used guns that were purchased legally, according to data from Mother Jones.

On a global scale

It should surprise no one that U.S. gun-death rates compare poorly against those of nations with the lowest rates, as NPR reports.

The Florida shooting is the latest reminder of the persistent gun violence in the United States. Rates of gun deaths in the U.S. are far greater than in much of the rest of the world. https://t.co/4oxmtaabqs pic.twitter.com/7cA398P2uk

America’s gun-death rates do look better alongside charts that compare it with the worst, but that’s cold comfort given the legal, political or social disarray in those countries.

There are quite a few countries where gun violence is a substantially larger problem than in the United States — particularly in Central America and the Caribbean. https://t.co/4oxmtaabqs pic.twitter.com/jetIVqiwM3

“Syria has a lower level of gun violence. Syria,” one person remarked on Twitter.

And when it comes to rich western countries, if Canada had the same population as the U.S., there would be five daily gun-related deaths in the Great White North, according to the Times.

America has almost 30. Every day.

Comparing Gun Deaths by Country: The U.S. Is in a Different World https://t.co/Dr2SUiRTEC via @UpshotNYT pic.twitter.com/abWBxCFdk7

Every mass shooting comes with renewed sadness and outrage. The only thing that rarely occurs is meaningful change.

Or you could’ve read the rest of your own screen shot:
The proportion of dissatisfied Americans preferring stricter laws is the highest Gallup has recorded, up nine points since 2017. https://t.co/Bl90qd6TrW pic.twitter.com/jyg2H5MagL

Still, specific changes to gun laws—when you explain them on a case-by-case basis to Americans—seem to garner support from both the public and experts, as the New York Times points out.

It would appear that a majority of Americans support 17 distinct gun-control policies that experts consider effective https://t.co/snEOyRU9Rp pic.twitter.com/8CuwnoaKDP

And yet fewer and fewer Americans want a ban on handguns.

Sadly, Americans probably can’t expect much change soon, especially with both a Republican president and Congress in power, with many who received generous financial backing from the National Rifle Association.

Often times, the mere mention of “gun control” worries those who fear the feds might take their guns away. Indeed, as if on cue, stock in firearms companies rose after the Parkland shooting, CNBC reports, yet another constant in the aftermath of mass shootings.