For Trump, nothing but good news on Iran—and no mention of the plane crash

Having brought his country to the brink of war, the U.S. president returns to his own re-election campaign and impeachment 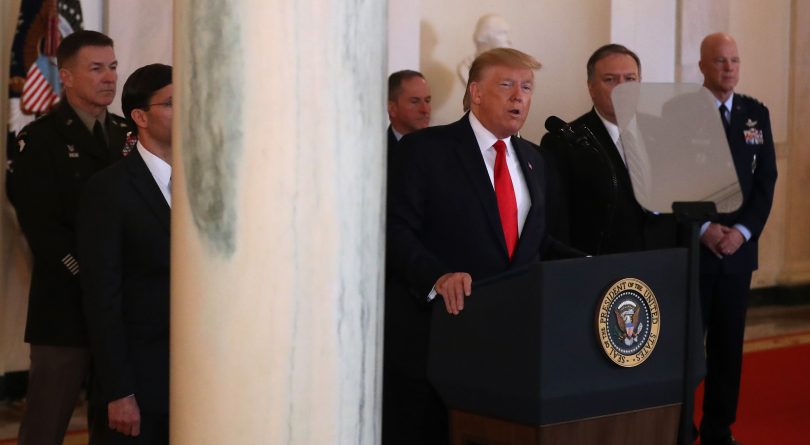 Smashing Israel’s record for brevity by a convincing margin, Donald Trump declared victory in his Two-Day War on Wednesday, postponing Armageddon until further notice, urging Americans to be “extremely grateful and happy,” inviting Iran’s theocrats to join him in architecting a mutually prosperous future, and allowing the capital to resume the molasses-in-January process of the president’s two-year impeachment.

Trump’s brief and uncommonly subdued address in the Grand Foyer of the White House came hours after a suspiciously benign Iranian missile attack on U.S. barracks in Iraq ended with no fatalities, minimal damage, and the surmise in American military circles that the Mullahs may have missed on purpose. “Fireworks in the desert,” Fox News’s John Roberts dismissed the assault as reporters waited for the president to orate, with news reports from the Cradle of Civilization affirming that Iran had indeed provided advance warning to the Iraqi government of where and when its short-range spacecraft would hit.

The twin spectres of Mesopotamian disaster and non-fatal Congressional censure watched over the president as he spoke between the formal portraits of George W. Bush and Bill Clinton  in the elegant antechamber. “Iran appears to be standing down,” Trump announced, a sea change from the Islamic Republic’s posture just a few hours earlier, when it dispatched “tens of missiles” to unleash megadeath on American bases and condemned The Donald to hell for last week’s annihilation of Maj.-Gen. Qassem Soleimani—an attack that, in the ayatollahs’ eyes, had made Satan Great again.

RELATED: The U.S. was justified in killing Soleimani—but is it ready for what comes next?

“They were slapped last night, but such military actions are not enough,” Supreme Leader Ali Khamenei said early Wednesday, a rather tepid comedown from his usual brimstone.

“You cut Soleimani’s hand from his body, your foot will be cut from the region,” Iranian President Hassan Rouhani colourfully chipped in—an outcome that, though highly unlikely, would fulfill Trump’s own long-stated goal of erasing the American military presence from the Muslim world.

Trump made no mention of the Ukrainian International Airlines Boeing 737 crash that claimed a reported 57* Canadian lives in Tehran on Wednesday morning (though Prime Minister Trudeau later told reporters the U.S. president expressed condolences in a phone call).  The Dow Jones Industrial Average leapt 200 points toward a new record high while the president was speaking, despite a one-per-cent drop in Boeing shares.

“We must all work together toward making a deal with Iran that makes the world a safer and more peaceful place,” Trump stated, flanked by military officers and cabinet members, including Secretary of State Mike Pompeo, the first-in-his-class West Point graduate who has been playing warhawk Dick Cheney to Trump’s novitiate W during the latest Iran showdown.

“We must also make a deal that allows Iran to thrive and prosper, and take advantage of its enormous untapped potential. Iran can be a great country.” The president announced his intention “to ask NATO to become much more involved in the Middle East process,” in addition to the thousands of additional land, air, and naval elements he already has sent to the intractable sand pits to frighten the Iranian regime.

“The fact that we have this great military and equipment, however, does not mean we have to use it,” Trump declared. “We do not want to use it. American strength, both military and economic, is the best deterrent.”

A day earlier, Supreme Leader Vladimir Putin had climbed down his client Bashar al-Assad’s chimney for a Russian Orthodox Christmas visit to Damascus, lighting a candle with the Patriarch of Antioch while, in Aleppo, thousands of Putin’s “liberated” Syrians chanted “Death to America.”

Somewhere over the rainbow, a post-Trump, post-Khamenei, post-Putin world waits beyond the horizon, but for now, our bomb-cratered planet braces for more of the old men’s wars. (Putin is a young 67, Trump will be 74 in June, and Khamenei is 80. The Iranian was diagnosed with Stage 4 prostate cancer in 2015, at which time Le Figaro predicted that “he has two years to live.”)

For now, at least, Trump’s mongering returned to the purely political battlespace with the announcement that his campaign will drop US$10 million on ads during the Super Bowl on Groundhog Day, a game that is likely to be played two days after Trump’s acquittal in the Senate and two days before his State of the Union address. Trump’s former mayor, Michael Bloomberg, will spend the same picayune (to him) amount to promote his candidacy for the Democratic nomination to the largest peacetime television audience of the year.

Senate Republicans, however, cannot set Trump free until Nancy Pelosi, the Democratic Speaker of the House of Representatives, formally conveys the charges against him, a process that has been stymied since before the Roman Christmas while leaders of both parties scudded Khamanei-calibre fireballs at each other. The hurling continued on Wednesday, demonstrating that it may be easier to bring peace to the Middle East than to Capitol Hill.

“The House Democrats’ turn is over. The Senate has made its decision,” Majority Leader Mitch McConnell, Republican of Kentucky, reiterated on Wednesday morning.

EDITOR’S NOTE: On Jan. 11, Foreign Affairs Minister Francois-Philippe Champagne revised the number of Canadians who died on Flight PS752 from 63 to 57.